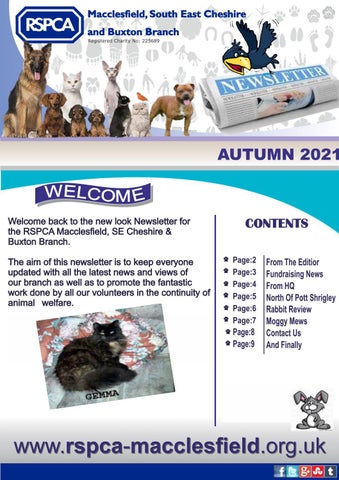 Hello and welcome to the September edition of our newsletter. A slightly shorter version again this time as Covid has played a part still in the past few months and has slowed down some of our normal progress that we do each year. The December edition though will hopefully be back to full strength with more news to report on and some of our other feature pages returning. On a personal note I would like to thank the branch for the Certiﬁcate of Appreciation that was sent to me back in May, this was a real surprise to me and was very gratefully received. It is a good thing for me to produce this newsletter so to receive this for doing something I enjoy doing was great. So in this edition we have got Brenda’s page on fundraising, Sue has put together some items from HQ, and Mike has sent a page on feral cats. I hope as always that you enjoy reading this and that it does the ultimate goal in helping as many animals as possible.

Best wishes to all, Stay Safe and I will see you again in December.

* PLEASE NOTE THAT DUE TO DELAYS WITH THIS NEWSLETTER SOME OF THESE EVENTS MAY HAVE ALREADY TAKEN PLACE. *

NEW BRANCHLINE NUMBER The well-used branch line telephone number is being replaced by a mobile number, The new branch number is 07846539500. Please make a note of it and pass it on to anyone who may need it.

Afghanistan We hope that it brings some comfort to know that the National Society has reached out to their animal welfare friends in Afghanistan to see what support the RSPCA can oﬀer. There is a charity named Nowzad, set up by a former British soldier, helping pets and working animals in Afghanistan. If you would like to donate, visit Nowzad’s website. RSPCA HQ have posted on social media to show their support for Nowzad and are sharing their donation links, so please feel free to share further. The National Society has called on the Government to eﬀect the safe evacuation from Kabul of all of Nowzad’s staﬀ, their families and the animals in their shelter as a matter of urgency. They are also working to help with animals which have arrived from Afghanistan arrive in the UK, they can be helped.

There are many cats which have lived outside for a long time and can be identiﬁed in many diﬀerent ways – as barn cats, feral cats or farm cats. Some of them urgently require a new home, though others can be trapped, neutered, given veterinary treatment and returned to the site on which they live. The National Society is running a campaign to help ﬁnd new homes for those cats which cannot / shouldn’t be returned to site. In order to simplify things, they have given the name ‘farm cats’ to cover all the groups listed above. The National’s campaign is to try to ﬁnd adoptive homes for ‘farm cats’ but not necessarily on farms! The link identiﬁes the kind of homes likely to be suitable for diﬀerent types of ‘farm cats’. The pages use two examples and one of those, Merlin, is from our very own Branch. You will recall that Mike works tirelessly – and often sleeplessly – to ﬁnd, trap and treat ‘farm cats’. Some of the cats are not fully feral and can be rehomed as outdoor cats. It’s great that this recognition of his hard work can perhaps help even more ‘farm cats’ to ﬁnd suitable homes. Perhaps you saw some of the media activity resulting from the National press release about this on 8th August. The National website now has a whole section on Adopting a Farm Cat under the ‘Find a Pet’ section. It stresses that an adopter should regard themselves as a guardian rather than an owner but still provide food, shelter and veterinary care – and any show of aﬀection that the cat

WELLY-VISION The National Society is keen for the general public to understand good practice in relation to animal husbandry and so has launched a new series of mini documentaries about life on RSPCA Assured farms. Kate Quillon of &quot;Food Unwrapped&quot; is involved in the promotion of this idea. The link to access the documentaries is

The ﬁrst mini documentary is 10 minutes long and focuses on pigs. It is aimed at people who eat pork products but will be of interest to many others too. It is followed by two shorter videos on pork labelling and pig behaviour. Later mini documentaries will be on laying hens, broiler chickens and turkeys.

The feral kitten dilemma. The feral kitten dilemma. In summer, quite often when working on our TNR (trap-neuter-return) programme, we&#39;ll come across a mother cat with kittens in tow. It&#39;s never an easy decision but it&#39;s very tempting to take the kittens into care for subsequent homing rather than releasing them, after neutering, to their natural environment. But is homing them the best welfare option? The dilemma arises because of the so-called, &#39;socialisation window&#39;: the fact that the experiences kittens have between two and seven weeks after birth inﬂuence their greatly their behaviour for the remainder of their life. During this socialisation period, kittens learn what is normal and safe - everything that they come across during this period will be accepted as something that is ‘okay’ later in life. Conversely, anything that they do not come across during this period, including humans, is likely to produce a fear response in adulthood. Cats are not the only species with this window of opportunity, dogs too being extremely receptive to socialisation between 12 and 16 weeks of age. Returning to cats, they have no inbuilt ‘need’ to be with people and they learn the desire to be around them - the onset of the fear response is six weeks in kittens and it is increasingly diﬃcult to socialise those who have had no human contact prior to weaning (seven weeks) and almost impossible after they reach sexual maturity (16 weeks.) Young feral kittens ten-week-old brought into a home environment before the onset of fear becomes established, will still have a signiﬁcant genetic inﬂuence from their parents (in particular the father) which will impact too on their friendliness as they mature. On balance, current wisdom is that it is best, in terms of overall welfare, to return feral kittens to their colony, once neutered, if trapped after weaning despite how tempting it is to try and domesticate them. Picture : a pair of ten-week-old feral kittens wait to go back to their home after being neutered. Note the ear tip which indicates to other trappers that the kittens have already received treatment.

He arrived as a

RETURNING IN NEXT EDITION

.....And that’s all folks. Obviously a much shorter edition of our newsletter due to all that is happening with Covid restrictions at this present time. We will be back very soon with a much fuller edition, so see you then. December 2021

An update on the charity's work over the last few months and details of some of our foster animals currently in care looking for new homes.