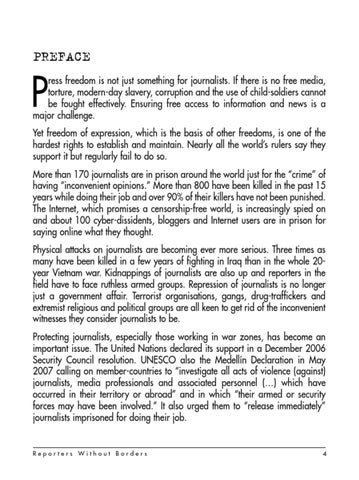 ress freedom is not just something for journalists. If there is no free media, torture, modern-day slavery, corruption and the use of child-soldiers cannot be fought effectively. Ensuring free access to information and news is a major challenge. Yet freedom of expression, which is the basis of other freedoms, is one of the hardest rights to establish and maintain. Nearly all the world’s rulers say they support it but regularly fail to do so. More than 170 journalists are in prison around the world just for the “crime” of having “inconvenient opinions.” More than 800 have been killed in the past 15 years while doing their job and over 90% of their killers have not been punished. The Internet, which promises a censorship-free world, is increasingly spied on and about 100 cyber-dissidents, bloggers and Internet users are in prison for saying online what they thought. Physical attacks on journalists are becoming ever more serious. Three times as many have been killed in a few years of fighting in Iraq than in the whole 20year Vietnam war. Kidnappings of journalists are also up and reporters in the field have to face ruthless armed groups. Repression of journalists is no longer just a government affair. Terrorist organisations, gangs, drug-traffickers and extremist religious and political groups are all keen to get rid of the inconvenient witnesses they consider journalists to be.

Protecting journalists, especially those working in war zones, has become an important issue. The United Nations declared its support in a December 2006 Security Council resolution. UNESCO also the Medellín Declaration in May 2007 calling on member-countries to “investigate all acts of violence (against) journalists, media professionals and associated personnel (…) which have occurred in their territory or abroad” and in which “their armed or security forces may have been involved.” It also urged them to “release immediately” journalists imprisoned for doing their job.

Handbook for journalists, Reporters Without Borders