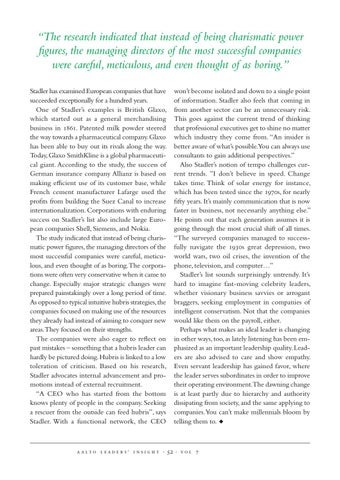 won’t become isolated and down to a single point of information. Stadler also feels that coming in from another sector can be an unnecessary risk. This goes against the current trend of thinking that professional executives get to shine no matter which industry they come from. “An insider is better aware of what’s possible.You can always use consultants to gain additional perspectives.” Also Stadler’s notion of tempo challenges current trends. ”I don’t believe in speed. Change takes time. Think of solar energy for instance, which has been tested since the 1970s, for nearly fifty years. It’s mainly communication that is now faster in business, not necessarily anything else.” He points out that each generation assumes it is going through the most crucial shift of all times. “The surveyed companies managed to successfully navigate the 1930s great depression, two world wars, two oil crises, the invention of the phone, television, and computer…” Stadler’s list sounds surprisingly untrendy. It’s hard to imagine fast-moving celebrity leaders, whether visionary business savvies or arrogant braggers, seeking employment in companies of intelligent conservatism. Not that the companies would like them on the payroll, either. Perhaps what makes an ideal leader is changing in other ways, too, as lately listening has been emphasized as an important leadership quality. Leaders are also advised to care and show empathy. Even servant leadership has gained favor, where the leader serves subordinates in order to improve their operating environment.The dawning change is at least partly due to hierarchy and authority dissipating from society, and the same applying to companies. You can’t make millennials bloom by telling them to.  ◆ 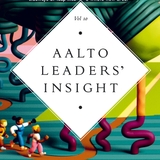