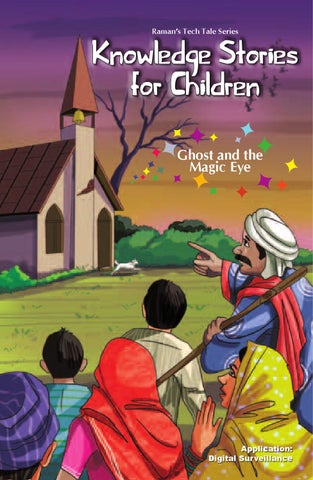 Knowledge Stories for Children Ghost and the Magic Eye

PREFACE Raman’s Tech Tale Series is an innovative storybook concept that aims to educate children in the high-tech area of information and communication technology (ICT) through interesting stories. Keeping in view today’s need to give technology orientation to children, a little technology element is introduced in the stories. The books will not only help children, but they will also make it simpler for parents and teachers to impart tech education to the young learners. These are normal stories originally written for children’s edutainment (education and entertainment). Without confusing the child, the technology element is kept in the background. The idea is to make the children curious to learn more about the tech aspects of life as they grow. Since the content mainly targets children in the age group of 6 – 12 years, the language used is quite simple to understand. Also, with a view to make the stories exciting, the environment in each story is presented through colourful illustrations. Each book in the series will also act as a catalyst to achieve the larger objective of ‘bridging the digital divide.’ As efforts are being made all over the world to take the technology benefits to the masses or the underprivileged sections of society, these books will empower people to take a step in that direction. The books will also supplement the conventional technology education in various schools. At present, the books are being published in the English language. However, depending on the demand, they will be translated in other languages also. A hallmark of the books in this series is that they can be adopted for stage shows by children, TV programmes for children, and short-format movies. The focus of the present book is on ‘Digital Surveillance,’ a concept that is used to help security agencies. We hope that our pioneering attempt to produce this educative literature for children will be suitably encouraged by teachers as well as parents. And this book, along with our other future work, will be introduced as an important knowledge resource for children. All books in the Raman’s Tech Tale Series will be equally useful for children in all parts of the world. ISBN 81-88551-03-1

No part of this book should be copied, reproduced, translated or stored in a retrieval system or transmitted in any other form or by any means including electronic, mechanical, recording or photocopying – without the prior written permission of the publisher – Raman Media Network.

Knowledge Stories for Children A collection of original, interesting tales that aim to foster technology awareness among children in an easy-to-understand way. Conceptualised and written by Rakesh Raman

ot a soul knew what was happening in the village. But word was spreading fast about the presence of John in his big house, which now stands ruined on the outskirts of the village Nori. Everyone was stunned. How could it be? John had, in fact, died in a road accident a year ago, and the villagers had buried his body with their own hands. Had he come back undead? Who knows? Bunty was the only one who claimed to have seen John’s ghost one day when he got late from school and dared to peep into the big house. And as was her wont, his younger sister Bubbly firmly supported her brother’s claims. Villagers were obviously scared but they were not able to find out the truth. Still, they were 3 Raman’s Tech Tale Series

adding their own guesses to the story - which was getting hotter than the summer sun with each passing day. Pinto said the new-look John had four heads – one for each direction. Shelly believed such spooks can fly at the speed of a cunning vulture. And Toboo, who owned a tea shop and had just got married, was more worried than others. “Can John hit a bride?” he asked in a shaking voice, thinking about his new wife whom he deeply loved. The buzz about John flew to Bamby geek. Bamby lived in the city with his parents and studied in a school. During vacations, Bamby would come to spend time with his grandparents who lived in this village. So he was here now. Bamby was pretty sore at Bunty’s and his sister’s claims, as he never believed in ghosts. One day, Bamby walked up to Bunty and Bubbly, who were surrounded by curious villagers. “What’s the matter with you, Bunty and Bubbly?” 5 Raman’s Tech Tale Series

asked Bamby, behaving like a grownup. “Why are you spreading spooky stories to frighten these folks?” “No – No, nothing,” Bunty fumbled, feeling the threat in Bamby’s voice, and his eyes began darting around in nervousness. “John, you know…has come back as a ghost,” Bunty explained to Bamby. “Ghost? What ghost? Are you outta your head? Lemme go and see for myself,” Bamby was quick to interrupt. All this while, the villagers were agape at Bamby’s bravado. When he took a few steps towards the big house, Bunty shouted, “You won’t find him there!” “But why?” Bamby asked. “You just said John is back as a ghost.” “John is now a ghost. And ghosts emerge only after sunset,” said Bubbly, who came forward as usual to support her brother. “Sunlight disturbs them.” 7 Raman’s Tech Tale Series

“Okay, lemme come back later,” said Bamby and rushed towards his house. Villagers exchanged nervous glances. But soon afterwards, they saw Bamby come again with a suitcase-like box in his hands. “What’s that?” wondered the villagers. But instead of stopping by, Bamby simply carried on in the direction of the big house – the house of the ‘ghost.’ A few tried to stop him, but he just ignored their calls. No-one else dared to follow Bamby for fear of the haunted house. Some even thought that Bamby would never come back and informed his grandparents about the adventurous pursuit in which the city boy had plunged. Granny smiled and grandpa preferred to turn a deaf ear. Villagers’ confusion increased on such an unexpected and casual response from the old 9 Raman’s Tech Tale Series

couple. Some were really worried, thinking that the visit to the big house was like a suicidal attempt by Bamby. To their utter surprise, however, Bamby ambled out of John’s house after some 30 minutes. Villagers who had already declared him dead were dumbstruck on seeing Bamby come back hale and hearty. “How is it possible?” they murmured until they were reminded by Bunty that it was still daytime. Only then did it strike them that during daytime John sleeps in his grave and he will come only after sunset, exactly as Bubbly had told them. But why did Bamby go there? What was he doing? What will happen now? All these questions really baffled the villagers. But they could do nothing more than scratch their head. Days went by in Nori. But the ghost gossip continued. In fact, rumours went further up. A few people claimed they also saw John’s ghost, who was now roaming around freely. But one could not find out if this was true. Many people had even stopped looking 11 Raman’s Tech Tale Series

towards the big house, as they feared they would get attacked or something. Even during daytime they would just tiptoe when they had to pass the haunted house. Things were going from bad to worse. These days nobody saw Bamby, who would spend most of his time at home. People knew that Bamby preferred to stay busy with his computer and gadgets. Then suddenly one night there was a big commotion in the village. People were running helter-skelter. The main action was around John’s house. People were shouting: “Magic Eye! Magic Eye!” Magic Eye? What’s Magic Eye? And Bamby was standing at the door of John’s house along with his grandpa, who held a black-faced man by his scruff. When asked, grandpa revealed that this was the ‘ghost’ who got caught by Bamby’s Magic Eye. Magic Eye! Yes, Bamby geek had fixed a Magic Eye in John’s house when he went there with a box 13 Raman’s Tech Tale Series

a few days ago. The Magic Eye was keeping an eye on everything that went on inside the house. And Bamby was able to watch what was happening in the house every minute on his computer monitor while sitting in his own home. Finally, one night, Bamby saw some movement on his monitor. He called his grandpa and showed it to him. Grandpa didn’t wait for a moment and quickly gathered his stick. Both grandpa and Bamby rushed towards the big house, where the ‘ghost’ had been seen moving on Bamby’s computer. Some villagers saw them going and followed them from a distance. Bamby and grandpa walked quietly on their toes to enter the house from the back gate. And you know what? They caught this ‘ghost’ who had painted his face black to scare away the villagers. But the ghost was not the undead John as people thought. Rather, Billo thief was using this house to hide his booty – the stolen things. 15 Raman’s Tech Tale Series

Billo’s plan was working well until Bamby decided to expose him. Billo thief never had the idea that Bamby’s Magic Eye will help people catch him and put him in the real big house where he belonged – jail. ■

What’s Magic Eye? These days, technology is increasingly being used for surveillance - which means carefully watching a building or area for suspicious activity. Among other uses, security agencies use high-tech surveillance cameras to track the movement of people in sensitive areas (like John’s house in our story). These cameras are installed at hidden corners in those sensitive places and they keep transmitting video information back to the remote control room (like Bamby’s house in our story) where security officers get to know about any wrongdoings by criminals. And whenever they see something amiss, they can raise an alarm and thus help catch them instantly. Our story used the name Magic Eye for a high-tech surveillance camera.

The Writer Rakesh Raman has conceptualised and written Raman’s Tech Tale Series – a collection of interesting technology-oriented stories. He has spent nearly 20 years in the information and communications technology (ICT) industry as a computer professional and senior technology journalist in India. He has extensive experience in print, online, and electronic media. In 1995, he was conferred the National-level award by the Haryana government for his contribution as a technology journalist. These days, he is specialising in New Media (including social media) communications and working as the Chief Dreamer of his company, Raman Media Network. You can contact him at his e-mail: rr_thakur@yahoo.com Media Reviews of Raman’s Tech Tale Series: “… Welcome to the world of cyber stories for kids from Raman’s Tech Tale Series. The stories take you back to the kiddie world of kings and queens and even animals but with a little twist. Whenever there is a problem, computer comes to aid, thus introducing curiosity in the child to understand a specific application of computers better…” THE ECONOMIC TIMES “Story book to bridge the digital divide… Titled Raman’s Tech Tale Series – Knowledge Stories for Children, the book targets children in the age group of six to 12 years. It will also supplement the conventional technology education in various schools…” THE DQ WEEK “Information about technology is embedded in original stories written for children’s edutainment (education and entertainment). To foster curiosity without confusion, such application areas as computer games, wireless Internet, video conferencing, database management, and the geographical positioning system are subtly discussed without complex jargon.” BOOKBIRD – A Journal of International Children’s Literature Price: Rs. 75 (in India); US$ 2 (Overseas) 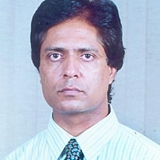