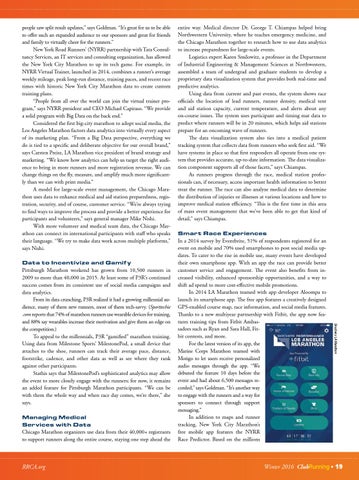 people saw split result updates,” says Goldman. “It’s great for us to be able to offer such an expanded audience to our sponsors and great for friends and family to virtually cheer for the runners.” New York Road Runners’ (NYRR) partnership with Tata Consultancy Services, an IT services and consulting organization, has allowed the New York City Marathon to up its tech game. For example, its NYRR Virtual Trainer, launched in 2014, combines a runner’s average weekly mileage, peak long-run distance, training paces, and recent race times with historic New York City Marathon data to create custom training plans. “People from all over the world can join the virtual trainer program,” says NYRR president and CEO Michael Capiraso. “We provide a solid program with Big Data on the back end.” Considered the first big-city marathon to adopt social media, the Los Angeles Marathon factors data analytics into virtually every aspect of its marketing plan. “From a Big Data perspective, everything we do is tied to a specific and deliberate objective for our overall brand,” says Carsten Preisz, LA Marathon vice president of brand strategy and marketing. “We know how analytics can help us target the right audience to bring in more runners and more registration revenue. We can change things on the fly, measure, and amplify much more significantly than we can with print media.” A model for large-scale event management, the Chicago Marathon uses data to enhance medical and aid station preparedness, registration, security, and of course, customer service. “We’re always trying to find ways to improve the process and provide a better experience for participants and volunteers,” says general manager Mike Nishi. With more volunteer and medical team data, the Chicago Marathon can connect its international participants with staff who speaks their language. “We try to make data work across multiple platforms,” says Nishi.

Managing Medical Services with Data Chicago Marathon organizers use data from their 40,000+ registrants to support runners along the entire course, staying one step ahead the

Smart Race Experiences In a 2014 survey by Eventbrite, 510/0 of respondents registered for an event on mobile and 700/0 used smartphones to post social media updates. To cater to the rise in mobile use, many events have developed their own smartphone app. With an app the race can provide better customer service and engagement. The event also benefits from increased visibility, enhanced sponsorship opportunities, and a way to shift ad spend to more cost-effective mobile promotions. In 2014 LA Marathon teamed with app developer Aloompa to launch its smartphone app. The free app features a creatively designed GPS-enabled course map, race information, and social media features. Thanks to a new multiyear partnership with Fitbit, the app now features training tips from Fitbit Ambassadors such as Ryan and Sara Hall, Fitbit contests, and more. For the latest version of its app, the Marine Corps Marathon teamed with Motigo to let users receive personalized audio messages through the app. “We debuted the feature 10 days before the event and had about 6,500 messages recorded,” says Goldman. “It’s another way to engage with the runners and a way for sponsors to connect through support messaging.” In addition to maps and runner tracking, New York City Marathon’s free mobile app features the NYRR Race Predictor. Based on the millions

Data to Incentivize and Gamif y Pittsburgh Marathon weekend has grown from 10,500 runners in 2009 to more than 40,000 in 2015. At least some of P3R’s continued success comes from its consistent use of social media campaigns and data analytics. From its data crunching, P3R realized it had a growing millennial audience, many of them new runners, most of them tech-savvy. (Sporttechie .com reports that 740/0 of marathon runners use wearable devices for training, and 880/0 say wearables increase their motivation and give them an edge on the competition.) To appeal to the millennials, P3R “gamified” marathon training. Using data from Milestone Sports’ MilestonePod, a small device that attaches to the shoe, runners can track their average pace, distance, footstrike, cadence, and other data as well as see where they rank against other participants. Stathis says that MilestonePod’s sophisticated analytics may allow the event to more closely engage with the runners; for now, it remains an added feature for Pittsburgh Marathon participants. “We can be with them the whole way and when race day comes, we’re there,” she says.

entire way. Medical director Dr. George T. Chiampas helped bring Northwestern University, where he teaches emergency medicine, and the Chicago Marathon together to research how to use data analytics to increase preparedness for large-scale events. Logistics expert Karen Smilowitz, a professor in the Department of Industrial Engineering & Management Sciences at Northwestern, assembled a team of undergrad and graduate students to develop a proprietary data visualization system that provides both real-time and predictive analytics. Using data from current and past events, the system shows race officials the location of lead runners, runner density, medical tent and aid station capacity, current temperature, and alerts about any on-course issues. The system uses participant and timing mat data to predict where runners will be in 20 minutes, which helps aid stations prepare for an oncoming wave of runners. The data visualization system also ties into a medical patient tracking system that collects data from runners who seek first aid. “We have systems in place so that first responders all operate from one system that provides accurate, up-to-date information. The data visualization component supports all of those facets,” says Chiampas. As runners progress through the race, medical station professionals can, if necessary, access important health information to better treat the runner. The race can also analyze medical data to determine the distribution of injuries or illnesses at various locations and how to improve medical station efficiency. “This is the first time in this area of mass event management that we’ve been able to get that kind of detail,” says Chiampas. 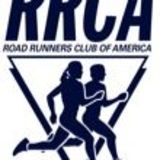 Club Running is the membership magazine of the Road Runners Club of America, the largest distance running organization in the U.S.

Club Running is the membership magazine of the Road Runners Club of America, the largest distance running organization in the U.S.