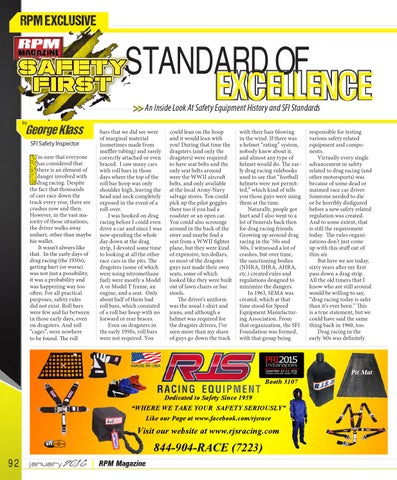 ’m sure that everyone has considered that there is an element of danger involved with drag racing. Despite the fact that thousands of cars race down the track every year, there are crashes now and then. However, in the vast majority of those situations, the driver walks away unhurt, other than maybe his wallet. It wasn’t always like that. In the early days of drag racing (the 1950s), getting hurt (or worse) was not just a possibility, it was a probability and was happening way too often. For all practical purposes, safety rules did not exist. Roll bars were few and far between in those early days, even on dragsters. And roll “cages”, were nowhere to be found. The roll

bars that we did see were of marginal material (sometimes made from muffler tubing) and rarely correctly attached or even braced. I saw many cars with roll bars in those days where the top of the roll bar hoop was only shoulder high, leaving the head and neck completely exposed in the event of a roll-over. I was hooked on drag racing before I could even drive a car and since I was now spending the whole day down at the drag strip, I devoted some time to looking at all the other race cars in the pits. The dragsters (some of which were using nitromethane fuel) were mostly a Model A or Model T frame, an engine, and a seat. Only about half of them had roll bars, which consisted of a roll bar hoop with no forward or rear braces. Even on dragsters in the early 1950s, roll bars were not required. You

could lean on the hoop and it would lean with you! During that time the dragsters (and only the dragsters) were required to have seat belts and the only seat belts around were the WWII aircraft belts, and only available at the local Army-Navy salvage stores. You could pick up the pilot goggles there too if you had a roadster or an open car. You could also scrounge around in the back of the store and maybe find a seat from a WWII fighter plane, but they were kind of expensive, ten dollars, so most of the dragster guys just made their own seats, some of which looked like they were built out of lawn chairs or bar stools. The driver’s uniform was the usual t-shirt and jeans, and although a helmet was required for the dragster drivers, I’ve seen more than my share of guys go down the track

with their hair blowing in the wind. If there was a helmet “rating” system, nobody knew about it, and almost any type of helmet would do. The early drag racing rulebooks used to say that “football helmets were not permitted,” which kind of tells you those guys were using them at the time. Naturally, people got hurt and I also went to a lot of funerals back then for drag racing friends. Growing up around drag racing in the ’50s and ’60s, I witnessed a lot of crashes, but over time, the sanctioning bodies (NHRA, IHRA, AHRA, etc.) created rules and regulations designed to minimize the dangers. In 1963, SEMA was created, which at that time stood for Speed Equipment Manufacturing Association. From that organization, the SFI Foundation was formed, with that group being

Booth 3107 Dedicated to Safety Since 1959 “WHERE WE TAKE YOUR SAFETY SERIOUSLY” Like our Page at www.facebook.com/rjsrace

responsible for testing various safety related equipment and components. Virtually every single advancement in safety related to drag racing (and other motorsports) was because of some dead or maimed race car driver. Someone needed to die or be horribly disfigured before a new safety related regulation was created. And to some extent, that is still the requirement today. The rules organizations don’t just come up with this stuff out of thin air. But here we are today, sixty years after my first pass down a drag strip. All the old timers that I know who are still around would be willing to say, “drag racing today is safer than it’s ever been.” This is a true statement, but we could have said the same thing back in 1960, too. Drag racing in the early ’60s was definitely 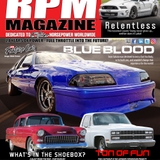