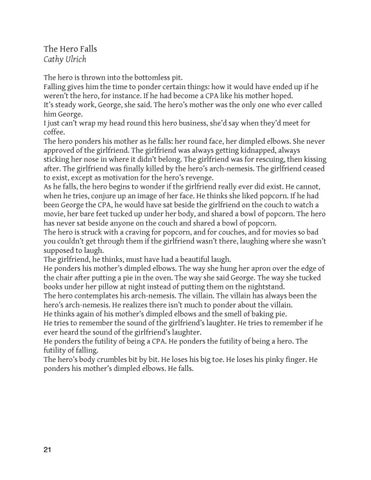 The Hero Falls Cathy Ulrich The hero is thrown into the bottomless pit. Falling gives him the time to ponder certain things: how it would have ended up if he weren’t the hero, for instance. If he had become a CPA like his mother hoped. It’s steady work, George, she said. The hero’s mother was the only one who ever called him George. I just can’t wrap my head round this hero business, she’d say when they’d meet for coffee. The hero ponders his mother as he falls: her round face, her dimpled elbows. She never approved of the girlfriend. The girlfriend was always getting kidnapped, always sticking her nose in where it didn’t belong. The girlfriend was for rescuing, then kissing after. The girlfriend was finally killed by the hero’s arch-nemesis. The girlfriend ceased to exist, except as motivation for the hero’s revenge. As he falls, the hero begins to wonder if the girlfriend really ever did exist. He cannot, when he tries, conjure up an image of her face. He thinks she liked popcorn. If he had been George the CPA, he would have sat beside the girlfriend on the couch to watch a movie, her bare feet tucked up under her body, and shared a bowl of popcorn. The hero has never sat beside anyone on the couch and shared a bowl of popcorn. The hero is struck with a craving for popcorn, and for couches, and for movies so bad you couldn’t get through them if the girlfriend wasn’t there, laughing where she wasn’t supposed to laugh. The girlfriend, he thinks, must have had a beautiful laugh. He ponders his mother’s dimpled elbows. The way she hung her apron over the edge of the chair after putting a pie in the oven. The way she said George. The way she tucked books under her pillow at night instead of putting them on the nightstand. The hero contemplates his arch-nemesis. The villain. The villain has always been the hero’s arch-nemesis. He realizes there isn’t much to ponder about the villain. He thinks again of his mother’s dimpled elbows and the smell of baking pie. He tries to remember the sound of the girlfriend’s laughter. He tries to remember if he ever heard the sound of the girlfriend’s laughter. He ponders the futility of being a CPA. He ponders the futility of being a hero. The futility of falling. The hero’s body crumbles bit by bit. He loses his big toe. He loses his pinky finger. He ponders his mother’s dimpled elbows. He falls.