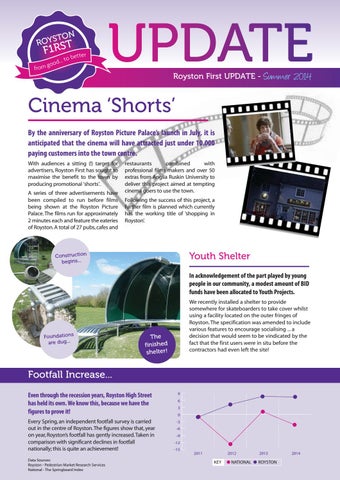 Cinema ‘Shorts’ By the anniversary of Royston Picture Palace’s launch in July, it is anticipated that the cinema will have attracted just under 10,000 paying customers into the town centre. With audiences a sitting (!) target for advertisers, Royston First has sought to maximise the benefit to the town by producing promotional 'shorts'. A series of three advertisements have been compiled to run before films being shown at the Royston Picture Palace. The films run for approximately 2 minutes each and feature the eateries of Royston. A total of 27 pubs, cafes and

restaurants combined with professional films makers and over 50 extras from Anglia Ruskin University to deliver this project aimed at tempting cinema goers to use the town. Following the success of this project, a further film is planned which currently has the working title of ‘shopping in Royston’.

Youth Shelter In acknowledgement of the part played by young people in our community, a modest amount of BID funds have been allocated to Youth Projects.

We recently installed a shelter to provide somewhere for skateboarders to take cover whilst using a facility located on the outer fringes of Royston. The specification was amended to include various features to encourage socialising ... a decision that would seem to be vindicated by the fact that the first users were in situ before the contractors had even left the site!

Footfall Increase... Even through the recession years, Royston High Street has held its own. We know this, because we have the figures to prove it! Every Spring, an independent footfall survey is carried out in the centre of Royston.The figures show that, year on year, Royston’s footfall has gently increased.Taken in comparison with significant declines in footfall nationally; this is quite an achievement!

Trails Easter Trail Hundreds of children and adults spent the morning of Easter Saturday roaming through the town centre searching for chocolate rabbits in shop windows. The ultimate prize: a 1kg chocolate egg! Having added a second trail to the calendar (Rudolph's at Christmas being the other) we intend to introduce a third this year ...so watch out for pirates in the town centre during the summer!

Town Trail Royston First has updated and reprinted the brochure for the ever popular Town Trail. Other actions are planned to secure this attraction as a key element of the tourism activities planned over the next few years.

Opportunity! The new promotional trailer themed around Royston's retailers will run for 2-3 minutes, giving a snapshot of the retail offer in town.

Open Secrets 2014 This event is supported as part of a long term strategy to encourage small businesses in the hope they will grow into larger local employers. There are also hidden benefits - as Royston’s Town Manager explains:

When developers, prospective tenants and their agents contact me about Royston, they want to hear about activities such as Open Secrets and the dozens of other events put on by organisations throughout the town. They need to see signs of a thriving town before they invest.The recent refurbishment of the Manor House,the ongoing development of The Banyers,the construction on the site of the old cattle market and the recent news about Royston Gateway would seem to suggest that businesses like what they see.