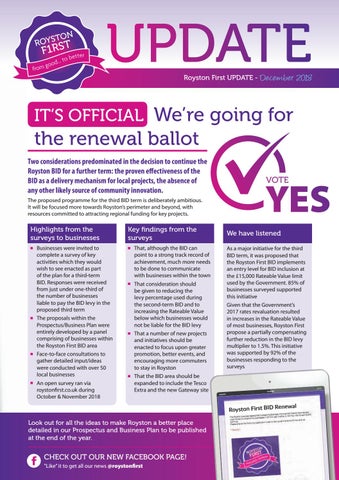 the renewal ballot Two considerations predominated in the decision to continue the Royston BID for a further term: the proven effectiveness of the BID as a delivery mechanism for local projects, the absence of any other likely source of community innovation. The proposed programme for the third BID term is deliberately ambitious. It will be focused more towards Royston’s perimeter and beyond, with resources committed to attracting regional funding for key projects.

Highlights from the surveys to businesses Businesses were invited to complete a survey of key activities which they would wish to see enacted as part of the plan for a third-term BID. Responses were received from just under one-third of the number of businesses liable to pay the BID levy in the proposed third term The proposals within the Prospectus/Business Plan were entirely developed by a panel comprising of businesses within the Royston First BID area Face-to-face consultations to gather detailed input/ideas were conducted with over 50 local businesses An open survey ran via roystonfirst.co.uk during October &amp; November 2018

Key findings from the surveys That, although the BID can point to a strong track record of achievement, much more needs to be done to communicate with businesses within the town That consideration should be given to reducing the levy percentage used during the second-term BID and to increasing the Rateable Value below which businesses would not be liable for the BID levy That a number of new projects and initiatives should be enacted to focus upon greater promotion, better events, and encouraging more commuters to stay in Royston That the BID area should be expanded to include the Tesco Extra and the new Gateway site

We have listened As a major initiative for the third BID term, it was proposed that the Royston First BID implements an entry level for BID inclusion at the £15,000 Rateable Value limit used by the Government. 85% of businesses surveyed supported this initiative Given that the Government’s 2017 rates revaluation resulted in increases in the Rateable Value of most businesses, Royston First propose a partially compensating further reduction in the BID levy multiplier to 1.5%. This initiative was supported by 92% of the businesses responding to the surveys

Look out for all the ideas to make Royston a better place detailed in our Prospectus and Business Plan to be published at the end of the year.

Projects that continue with a “YES” vote... This page shows some of the principal successes that Royston has benefited from as a result of the work of Royston First since its inception.

Providing additional policing for both town and industrial estate

Collect entry forms on the day from Fish Hill Square, Royston. Children must be accompanied by an adult at all mes

Parking One hour free parking via scratchcards and Free-after-3

Exploit local events to include the use of Smart technology

Use social media for targeted campaigns

Showcase both town and industrial estate businesses to each other

Broker a deal for a multi-storey car park, or

Investigate and deliver a park and ride system

Run a local beer, wine and cheese or food festival Reinstate the shuttle bus to run between the Royston Gateway, the industrial estate, Tesco and the town centre

Run a series of job fairs

Initiate a maintenance programme, including private land Implement a free-to-use dockless community bike scheme across the industrial estate and town

ANPR for the industrial estate

If you are now NOT paying into the BID because of the change in threshold, you can still pay voluntarily and vote at BID meetings.

Visit roystonfirst.com to find out how!

Distribution of BID review literature to all BID payers