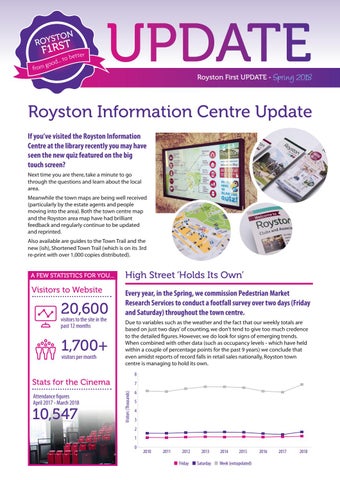 Royston Information Centre Update If you’ve visited the Royston Information Centre at the library recently you may have seen the new quiz featured on the big touch screen? Next time you are there, take a minute to go through the questions and learn about the local area. Meanwhile the town maps are being well received (particularly by the estate agents and people moving into the area). Both the town centre map and the Royston area map have had brilliant feedback and regularly continue to be updated and reprinted. Also available are guides to the Town Trail and the new (ish), Shortened Town Trail (which is on its 3rd re-print with over 1,000 copies distributed).

A FEW STATISTICS FOR YOU...

High Street ‘Holds Its Own’ Every year, in the Spring, we commission Pedestrian Market Research Services to conduct a footfall survey over two days (Friday and Saturday) throughout the town centre. Due to variables such as the weather and the fact that our weekly totals are based on just two days’ of counting, we don’t tend to give too much credence to the detailed figures. However, we do look for signs of emerging trends. When combined with other data (such as occupancy levels - which have held within a couple of percentage points for the past 9 years) we conclude that even amidst reports of record falls in retail sales nationally, Royston town centre is managing to hold its own. 8

Stats for the Cinema

The A505 Link Road Development A year ago Royston First carried out a survey to businesses in the industrial area to highlight the congestion issues being experienced. Nearly 95% of businesses questioned reported delays leaving the industrial estates; frequently amounting to 30 minutes or more. Since then, Royston First has been campaigning for the access road to alleviate congestion as well as attracting new businesses to the Royston Gateway. Finally, after months of discussion, the Royston Gateway has finally got a green light. Now Royston First is supporting the many companies that are enquiring about office or industrial space. Currently the access road is scheduled for completion by the end of the summer - so no more or, at least, rather less queueing in the dark this winter!

TOWN TRAILS On March 31st the centre of Royston hosted the fifteenth annual Children’s Easter Chocolate Trail. Although it rained, it was still one of the most successful Easter trails yet, up by 10% on last year, and bringing 294 children into the town centre along with their parents and siblings. One lucky winner received the 1.2KG chocolate egg at the end of the day, with all the participants receiving mini chocolate eggs. Coming soon is the Music Trail taking place on the 7th of July. Watch out for children looking for musical instruments hidden in shop windows and market stalls. This is the newest trail but last year over 600 people participated on the day so get ready for a busy High Street!

Royston Showreels We are currently planning on updating the showreels that are featured on the Royston First website and played in the cinema. The town’s eateries and the retail video both need updating. The films were originally made 2 years ago and there have since been around 30 new retailers queueing up to be included! With the cinema attracting just over 10,000 per year: that’s a lot of advertising for the town!

This is a printed guide of all Royston based consumer businesses listed by product/ service and distributed to 15,000 local households.

Our local police are keen to tackle a spate of tool thefts from vans that have been happening in the area.

The front page of this years Focus features the 15 new customer facing businesses that opened during 2017.

The Royston business awards are back celebrating local businesses and rewarding achievement in the area. The event will recognise and acknowledge real business excellence in the local and surrounding areas. Royston First are helping to ensure the event is a success by employing an event co-ordinator – with nearly 200 nominations there is a lot of co-ordination to do!

to all the businesses taking part!

Royston First is also sponsoring the programme on the night!

All businesses can access Grant Funding and Free Energy Efficiency reviews, thanks to ERDF funding. The BEE (Business Energy Efficiency) programme can provide grant funding up to a maximum of £20,000, or 25% of project costs, on projects such as LED Lighting, Smart Windows, energy- efficient Heating and Cooling Systems and Electric Vehicles. The pot of grant funding is limited and businesses are urged to register their interest now at: Online www.beecp.org/sign-up Tel 01733 882549 Email info@beecp.co.uk

We welcome your closer involvement in the running of the BID and its various activities. This year’s AGM will take place on Thursday 14th June at 6.30pm in the Royston Picture Palace cinema in the Town Hall.

Discover Royston Continuing the drive to bring tourism into the town, the “Discover Royston” product has been promoted among WI groups and coach tour operators. Materials have been produced to endorse the museum, Cave and Town Trail as a half day trip. Adverts have been put in regional WI magazines and tour companies have been contacted and sent information about the trip. There have been enquiries from both groups - so this activity seems be bearing fruit!