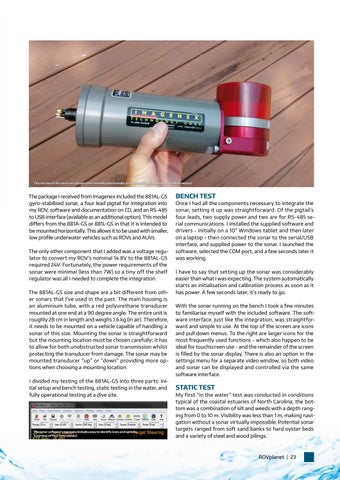 This version of the sonar was designed for mounting horizontally on smaller ROVs. (Courtesy of Paul Unterweiser)

The package I received from Imagenex included the 881AL-GS gyro-stabilised sonar, a four lead pigtail for integration into my ROV, software and documentation on CD, and an RS-485 to USB interface (available as an additional option). This model differs from the 881A-GS or 881L-GS in that it is intended to be mounted horizontally. This allows it to be used with smaller, low profile underwater vehicles such as ROVs and AUVs. The only other component that I added was a voltage regulator to convert my ROV's nominal 14.8V to the 881AL-GS required 24V. Fortunately, the power requirements of the sonar were minimal (less than 7W) so a tiny off the shelf regulator was all I needed to complete the integration. The 881AL-GS size and shape are a bit different from other sonars that I've used in the past. The main housing is an aluminium tube, with a red polyurethane transducer mounted at one end at a 90 degree angle. The entire unit is roughly 28 cm in length and weighs 1.6 kg (in air). Therefore, it needs to be mounted on a vehicle capable of handling a sonar of this size. Mounting the sonar is straightforward but the mounting location must be chosen carefully; it has to allow for both unobstructed sonar transmission whilst protecting the transducer from damage. The sonar may be mounted transducer “up” or “down” providing more options when choosing a mounting location. I divided my testing of the 881AL-GS into three parts: initial setup and bench testing, static testing in the water, and fully operational testing at a dive site.

BENCH TEST Once I had all the components necessary to integrate the sonar, setting it up was straightforward. Of the pigtail’s four leads, two supply power and two are for RS-485 serial communications. I installed the supplied software and drivers - initially on a 10" Windows tablet and then later on a laptop - then connected the sonar to the serial/USB interface, and supplied power to the sonar. I launched the software, selected the COM port, and a few seconds later it was working. I have to say that setting up the sonar was considerably easier than what I was expecting. The system automatically starts an initialisation and calibration process as soon as it has power. A few seconds later, it's ready to go. With the sonar running on the bench I took a few minutes to familiarise myself with the included software. The software interface, just like the integration, was straightforward and simple to use. At the top of the screen are icons and pull down menus. To the right are larger icons for the most frequently used functions - which also happen to be ideal for touchscreen use - and the remainder of the screen is filled by the sonar display. There is also an option in the settings menu for a separate video window, so both video and sonar can be displayed and controlled via the same software interface.

STATIC TEST My first “in the water” test was conducted in conditions typical of the coastal estuaries of North Carolina; the bottom was a combination of silt and weeds with a depth ranging from 0 to 10 m. Visibility was less than 1 m, making navigation without a sonar virtually impossible. Potential sonar targets ranged from soft sand banks to hard oyster beds and a variety of steel and wood pilings. 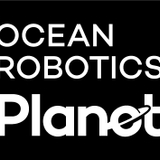