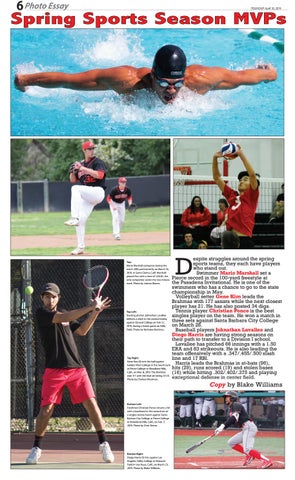 Top: Mario Marshall competes during the men s 200-yard butterﬂy on March 16, 2019, in Santa Clarita, Calif. Marshall placed ﬁrst with a time of 1:56.02, the only competitor under the two minute mark. Photo by Joshua Manes.

Top Left: Starting pitcher Johnathan Lavallee delivers a pitch in the second inning against Oxnard College on Feb 12, 2019, during a home game on Kelly Field. Photo by Nicholas Martinez.

Top Right: Gene Kim (3) sets the ball against Golden West College in the South Gym at Pierce College in Woodland Hills, Calif., on Mar. 8, 2019. The Brahmas won 3-1 with the ﬁnal set being 25-23. Photo by Chelsea Westman.

Bottom Left: Freshman Christian Ponce returns a hit with a backhand in the second set of a singles tennis match against Santa Barbara City College at Pierce College in Woodland Hills, Calif., on Feb. 7, 2019. Photo by Chris Torres.

espite struggles around the spring sports teams, they each have players who stand out. Swimmer Mario Marshall set a Pierce record in the 100-yard freestyle at the Pasadena Invitational. He is one of the swimmers who has a chance to go to the state championship in May. Volleyball setter Gene Kim leads the Brahmas with 177 assists while the next closest player has 21. He has also posted 34 digs. Tennis player Christian Ponce is the best singles player on the team. He won a match in three sets against Santa Barbara City College on March 28. Baseball players Johnathan Lavallee and Diego Harris are having strong seasons on their path to transfer to a Division I school. Lavallee has pitched 66 innings with a 1.50 ERA and 83 strikeouts. He is also leading the team offensively with a .347/.455/.500 slash line and 17 RBI. Harris leads the Brahmas in at-bats (96), hits (29), runs scored (19) and stolen bases (16) while hitting .302/.402/.375 and playing