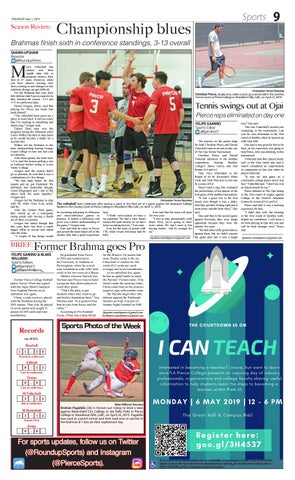 en’s volleyball last season won their eighth state title in program history, their first in 15 years. However, when you have players leaving, new faces coming in and changes on the sidelines, things can get difficult. For the Brahmas this year, their title defense didn’t go as expected as they finished the season 3-13 and 1-11 in conference play. Daniel Grogan, libero, said that playing for Pierce has made him push himself. “The volleyball team gives me a place to work hard. It lets me know that I’m working at something and improving,” Grogan said. Edison Zhou took over the program during the offseason when Lance Walker decided to step down as he would become a father for a second time. Walker led the Brahmas to the state championship beating Orange Coast College in four sets last year in Fullerton. After three games, the team were 1-2 to start the season getting a win at Fullerton before losing to Irvine Valley College. Grogan said the season didn’t go as planned, he said that it was a combination of a few things. “We had high hopes for this season and we got frustrated. We definitely had leadership though; Grant [Degrasse] and I and of the others held the team together," Grogan said. Grogan led the Brahmas in digs with 98, while Gene Kim, setter, had 40. After the Golden West game, they would go on a nine-game losing streak only forcing a fourth set on three occassions. Grogan has stated though that this year, there has been a much bigger effort to recruit new talent onto the team. “A couple of big things would

Christian Ponce, singles one, walks to pick up a tennis ball in the Xanthos Tennis Courts at Pierce College in Woodland Hills, Calif., on April 22, 2019.

Tennis swings out at Ojai

Pierce reps eliminated on day one

The volleyball team celebrates after scoring a point in the third set of a game against the Moorpark College Raiders in Ken Stanley Court at Pierce College in Woodland Hills, Calif., on April 12, 2019.

be recruiting and going to offseason and non-conference games to practice. It makes a difference and gives you a better understanding of the game,” Grogan said. Kim said that he came to Pierce and joined the team based off of the alumni who had a good experience

here. “I think next season, we have a lot potential. We had a bare bones season this past season, so we have been recruiting heavily,” Kim said. Kim led the team in assists with 178, while Grant DeGrasse had 84 kills.

Former Pierce College football player Xavier Ubosi has signed with the Super Bowl Champion New England Patriots as an undrafted free agent. Ubosi, a wide receiver, played with the Brahmas during the 2015 season. That year, he played in seven games and caught 31 passes for 658 yards and nine touchdowns.

Sports Photo of the Week

He graduated from Pierce for the Blazers. On passes that in 2016 and transferred to went 20-plus yards in the air, the University of Alabama at Ubosi had 12 catches for 546 Birmingham, where he scored yards (45.5 yards per catch nine touchdowns with 1,065 total average) and seven touchdowns. yards in his two years as a Blazer. As an undrafted free agent, Athletic Director Moriah Van he has an uphill battle to make Norman said Pierce tries to build the Patriots’ 53-man roster. If he a program that allows players to doesn't make the opening roster, reach their goals. Ubosi could land on the practice “That’s the plan, to get squad or sign with another team. students where they want to go The Patriots begin their title and build a foundation here,” Van defense against the Pittsburgh Norman said. “It is great to hear Steelers on Sept. 8 as part of that he was from Pierce and the Sunday Night Football on NBC. valley.” According to Pro Football fgamino.roundupnews@gmail.com Focus, Ubosi was a deep threat bwilliams.roundupnews@gmail.com

Kim said that the team will prep for next year. “I love to play passionately with heart. Now, we’re going to have more talent. We don’t need it, but having bodies will be enough for us.”

The journey on the grand stage for both Christian Ponce and Daniel Vinterfeld came to an end on day one of The Ojai Tennis Tournament. Christian Ponce and Daniel Vintereld advanced in the doubles competition, beating Reedley College’s James Garcia and Joel Reimer 6-4 and 6-1. They were eliminated in the Round of 64 by Riverside’s Miles Clark and Gleb Mityurin in two sets by a score of 6-2. Head Coach Long Dao evaluated the performance of his players in the first game of the doubles tournament. “It was a good win in the first round even though it was a shaky start they got their footing right and it went pretty smooth from there,” Dao said. Dao said that in the second game against Riverside, they were tough opponents because they were the number five seed. “We had some really good chances against them, but we didn’t execute the game plan and it was a tough

loss,” Dao said. This was Vinterfeld’s second year competing in the tournament. Last year he was eliminated in the first round of doubles when he teamed up with Siraj Dail. Dao said it was great for him to be back, as his experience was going to help Ponce, who was debuting in this tournament. Vinterfeld said they played pretty well in the first round and said it wasn’t considered an improvement in comparison to last year when he played with Dail. “It was my last game as a community college player and it was fun,” Vinterfeld said. “I don’t see it as an improvement for me.” Ponce debuted in The Ojai losing in the first round of singles against College of the Desert's Sebastian Gomez by scores of 6-2 and 6-1. Ponce said that it was a learning experience for him. "I didn't play well, but winning in the first round of doubles really helped my confidence. I will learn a lot from playing at Ojai this year and will be back stronger next," Ponce said.

Kristian Pagalidis (26) is thrown out trying to steal a base against Bakersfield City College at Joe Kelly Field at Pierce College in Woodland Hills, Calif., on April 26, 2019. Pagalidis was used as a pinch runner and then took over at catcher in the Brahmas 8-1 loss on their sophomore day.

If you need an accommodation due to a disability to participate in this I can TEACH fair, please contact the Special Services Department at special_services@piercecollege.edu or (818) 719-6430, at least 5 business days in advance.