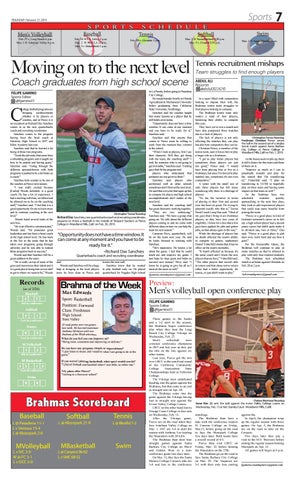 ollege football programs are bringing reinforcements whether it be players or coaches, and at Pierce it is no exception as Richard Dax Sanchies comes in as the new quarterbacks coach and recruiting coordinator. Sanchies comes to the program having been the head coach at Hawkins High School in 2017 and Ribet Academy last year. Sanchies said that he learned a lot being in those two programs. “I took the adversity that came from a rebuilding program and it taught me how to be patient and having goals,” Sanchies said. “Going through the different ups-and-downs with both programs it pushed to be a lot better as a coach.” Sanchies feels ecstatic to be one of the coaches at Pierce next season. “I was really excited because [Carlos] Woods definitely is a great coach. He has a lot of experience. I had a meeting with him, we talked and he allowed me to be on the coaching staff,” Sanchies said. “I feel that it is a good opportunity for me to learn more and to continue coaching at the next level.” Woods listed several traits of the new hire. “He is an effective communicator,” Woods said. “He possesses great leadership and has been a head coach at the high school level. He has been in the fire in the sense that he has taken over programs, going through adversity and he was able to sustain those programs back to success.” Woods said that Sanchies will be a great addition to the team. “He is really on top of some of the guys and maximizes their talent and it is a great plus to bring him on our staff to get to where we want to be,” Woods

prepares to throw a football in the middle of Shepard Stadium at Pierce College in Woodland Hills, Calif. on Feb. 20, 2019.

“Opportunity does not have a time window. It can come at any moment and you have to be ready for it.” -Richard Dax Sanchies Quarterbacks coach and recruting coordinator

said. Woods said Sanchies will be a huge help in bringing in the local players since he lives close to Pierce and

knows the area well. Sanchies knew that he wanted to play football early on. He played quarterback for Nogales High School

Brahma of the Week Max Edwards

Sport: Basketball Position: Forward Class: Freshman High School: Simi Valley 41 total points over two games last week. He has tied teammate Anthony McIntyre with two Brahma of the Week selections. What do you feel you can improve on? “Being more consistent and improving on defense.” Do you have any pregame rituals or superstitions? “I just listen to music and visualize what I am going to do in the game.” If you weren’t playing basketball, what sport would you do? "I played football and baseball when I was little, so either one." Any plans after Pierce? “Getting to a four-year school."

in La Puente, before going to Pasadena City College. He would transfer briefly to Florida Agricultural & Mechanical University before graduating from California State University, Northridge. Sanchies said his coaches taught him many lessons as a player that he still holds on to today. “Opportunity does not have a time window. It can come at any moment and you have to be ready for it,” Sanchies said. Sanchies said that anyone that comes to Pierce must be willing to work from the moment they commit to the school. “When I look at players, first I see their character. Will they get along with the team, the coaching staff? I look for someone who is not going to get in trouble,” Sanchies said. “Getting guys that fit the program and players who understand that positions are not given to them.” Sanchies said players who performed well at other schools sometimes don’t fit-in at the next level. He said that everyone that signs up has to compete for places and high school accomplishments don’t matter at the next level. Sanchies said the coaching staff has great chemistry working together. “They are very embracing,” Sanchies said. “We have a group chat going on. We talk about the different players coming in and we come with different ideas on how we can help the team for next season.” Cameron Perry, quarterback, will be on the team next year. He said he looks forward to working with Sanchies. “He’s impressive. He knows a lot about the game. I feel that he could teach me and improve my game. I just hope he does great and helps us succeed next season,” Perry said. “I know he is going to give his all so I must do the same as well.” fgamino.roundupnews@gmail.com

Tennis recruitment mishaps Team struggles to find enough players ABDUL ALI Reporter @abdul20224210 In a sport filled with competitors looking to impose their will, the Brahmas tennis team struggles to find players looking to compete. The Brahmas tennis team only rosters a total of four players, hindering their ability to compete this year. They have yet to win a match and have also postponed three matches due to a lack of players. The lack of players is not only affecting the matches they can play but also how competitive they can be. Christian Ponce, a member of the tennis team, said it forces him to play a larger role as a freshman. “I get to play better players but sometimes those players are just too good,” Ponce said. “I would have been playing four or five as a freshman, but since I'm forced to play number one, sometimes it's not even competitive.” A roster with the small size of only three players has left many wondering why there is a shortage of players. “So far, the turnover in terms of playing in their first and second year has been so great. I'm trying to pinpoint exactly why that is,” Tennis Head Coach Long Dao said. “Most of my guys that I bring in are freshman players, so they have two years of eligibility. I know for a fact that a few guys have applied for jobs and gotten jobs, so that always gets in the way.” While the shortage of players has no doubt affected the team's ability to compete in games, sophomore Daniel Vinterfeld insists that it has no effect on the team's mentality. “It hasn't affected us because it's the same coach and I know the new players that are here,” Vinterfeld said. “The other players that weren't able to return and that chose not to return either had a better opportunity for tennis, or just didn't want to play.”

Freshman Christian Ponce serves the ball in the second set of a singles tennis match against Santa Barbara City College at Pierce College in Woodland Hills, Calif on Feb. 7, 2019.

As the losses seem to pile up, there is still a future for this team and those of them on it. “Improve as much as I can to potentially transfer and play for the school that I’m transferring to,” Vinterfeld said. “I plan on transferring to UCSB to hopefully play on their team and having some impact on that team as well.” As the brahmas have two scheduled matches quickly approaching in the next four days, they look to add experienced players that could reap some benefits from joining the team. “Pierce is a good place to kind of kickstart someone's career as in let's say a high school player had a decent junior career but didn't quite make it to division one, two or three,” Dao said. “Pierce is a good place to just start over, work hard and see how it goes.” For the foreseeable future, the Brahmas will continue to play as many matches as they’re allowed to play with only four rostered students. The Brahmas next scheduled match is at home against Glendale on Feb. 28 at 2 p.m. Aali.roundupnews@gmail.com

Three games in the books and a 1-2 start to the season, the Brahmas begin conference play when they host the Long Beach City College Vikings on Wednesday, Feb. 27. Men’s volleyball were crowned conference champions in 2017 and last year as they put the title on the line against six other teams. Last year, Pierce got the win over LBCC in the semifinal round of the California Community College Association State Championships held at Fullerton College. The Vikings were undefeated heading into the game against the Brahmas, but that came to an end in straight sets on Apr. 20. The Brahmas come into the game against the Vikings having lost in straight sets against the Irvine Valley College Lasers. LBCC on the other hand lost to Orange Coast College in four sets on Wednesday, Feb. 13. After the Vikings game, Pierce are on the road when they face Antelope Valley College on Mar. 1. AVC are 1-4 to start the season with Anthony Lee leading the Mauraders with 28 kills. The Brahmas than host four straight games against Santa Barbara City College on Mar.6 and Golden West in a nonconference game two days later. On Mar. 13, they face the Santa Monica College Corsairs who are 1-4 and last in the conference

standings. The Brahmas than have a date with the conference leaders El Camino College on Friday, Mar.15, before going on the road to face the Moorpark College five days later. Both teams have a overall record of 4-1. Pierce than visit LBCC on Friday, Mar. 22 before hosting the Mauraders on the 27th. The Brahmas go on the road to face Santa Barbara City College on Mar. 29. The Vaqueros are 3-1 with their only loss coming

against the. In April, the champions wrap up the regular season with three games. On Apr. 5, the Brahmas are on the road to take on the Corsairs. Five days later they pay a visit to the ECC Warriors before ending the regular season hosting Moorpark on Apr. 12. All games will begin at 6 p.m.