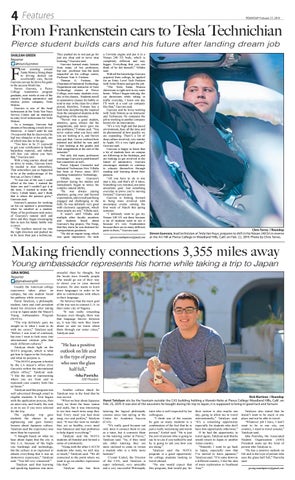 rom scooting around Santa Monica Smog shops to driving decked out eco-friendly cars, Steven Guevara can say he drove his goals to the success finish line. Steven Guevara, a Pierce College Automotive program graduate, now works at one of the nation’s leading automotive and electric power company, Tesla Motors. Guevara is one of the head technicians at the Tesla Van Nuys Service Center and an instructor to entry level technicians for Tesla Motors. As a teenager, Guevara had dreams of becoming a truck driver. However, it wasn’t until he was 19-years-old that he discovered he had two obstacles in his path, one of which was due to his age. “You have to be 21 years-old to get your certification to handle hazardous material, and nobody will hire you unless you have that,” Guevara said. With a long journey ahead and no drive to waste, Guevara knew he needed to start somewhere. That somewhere just so happened to be at the undercarriage of his first car, a Chevy Cobalt. “It was one of the cars I could afford at the time. I wanted the faster one and I couldn’t get it at the time. I wanted to make the Chevy Cobalt faster, and I think that is where the passion grew,” Guevara said. Guevara’s passion for working on his car sparked a powerhouse when he enrolled as a student. Many of his professors took notice of Guevara’s natural skill and drive and they began encouraging him to turn his handy hobby into a career. “The teachers steered me into the right direction and pushed me to be more than just a technician.

They pushed me to not just go for just any shop and to never stop learning,” Guevara said. Guevara learned many lessons from many of his professors, but one professor was the most impactful on his college career, Professor Tom A. Fortune. Thomas A. Fortune, the Chairman of Industrial Technology Department and instructor of Auto Technology classes at Pierce College, sees many students every day in his classes. Students enroll in automotive classes for hobby or tend to stay in the class for a short period, therefore, Fortune has a hard time deciphering the inspired from the uninspired students at the beginning of the semester. “Steven was a good student, attentive, quiet, always did his assignments, and never gave me any problems,” Fortune said. “You never realize what you have until you are looking at it, and Steven was just that. I never realized how talented and skilled he was until I was looking at the grades and final assignments at the end of the semester.” Not only did many professors encourage Guevara to push himself but counselors as well. Pierce Adjunct Counselor and Industrial Technician Alex Villalta has been at Pierce since 2015 teaching Automotive Technology. Villalta was Guevara’s professor during his studies and immediately began to notice his complex natural ability. “He was always paying attention, going over and beyond expectations, and overall just being engaged and challenging in the field. He was definitely very good with electronic equipment, which most people are not,” Villalta said. It wasn’t until Villalta and multiple other faculty members and students heard about Guevara’s big project, The Swap, that they knew he was destined for transportation greatness. “He did an engine swap, which was quite impressive. He took

a Corvette engine and put it in a Nissan 240 SX body, which is completely different and way bigger. Everything that you can think of he did himself,” Villalta said. With all the knowledge Guevara acquired from college, he applied for an Entry Level Tech Position with Tesla Motors and got the job. “The Tesla Santa Monica showroom is right next to my route home. When I began noticing the car showroom while sitting in traffic everyday, I knew one day I’ll work at a cool car company like that,” Guevara said. Guevara said he loves working with Tesla Motors as an Instructor and Technician. He compares the job to working in another company known for its innovations. “It’s a very high and fast paced environment, busy all the time and its phenomenal at how quickly we are expanding. There’s a lot of deep culture involved, very similar to Apple. It’s a very tight group,” Guevara said. Guevara is happy to know that a lot of students here on campus are following in his footsteps, and are looking to get involved in the future of automotive. Guevara encourages students to continue to educate themselves through reading and learning about thier passion. “All you have to do is one step a day, and that’s all it takes. Something very minimal, not some unrealistic goal. Just something everyday to prove you’re moving forward,” Guevara said. Guevara is looking forward to being more involved with on-campus events coming the first week of March this spring semester. “I definitely want to get my Nissan 240 SX out there because a lot of students want to see it because it’s very Frankenstein because there are so many different parts in there,” Guevara said. sgreen.roundupnews@gmail.com

Young ambassador represents his home while taking a trip to Japan GINA WONG Reporter @ginabwong99 Usually the American college experience takes place on campus, but one student found his pathway while overseas. Harut Tatulyan, a philosophy student, tutor and club president found his direction after taking a trip to Japan under the Mayor’s Young Ambassadors Program (MAYA). “The trip definitely gave me insight as to what I want to do with my career,” Tatulyan said. “Before I was kind of confused, but now I want to look more into international relation jobs that study different cultures.” Tatulyan sheds light on the MAYA program, which is what got him to Japan in the first place and what its purpose is. “The MAYA program is hosted by the LA mayor’s office (Eric Garcetti) within the international affairs office,” Tatulyan said. “I like the idea of representing where you are from and to represent your country feels like an honor.” Tatulyan said this program was well advertised through email to eligible students. It first begins with the application process, then an interview, and finally the wait is on to see if you were selected for the trip The eight-day trip gave students the chance to go sightseeing and gain history lessons about Japanese culture. Tatulyan said the experience was more than he expected. “I thought based on what we hear about Japan that the city is like L.A. because of the highrise buildings and technology, but the culture is so ingrained in almost everything that it was an immersive experience,” Tatulyan said. “You felt very connected.” Tatulyan said that learning and speaking Japanese was more

stressful than he thought, but the locals were friendly people who would go out of their way to direct you to your desired location. He also wants to learn more languages in order to be able to communicate with others in their language. He believes that the main goal of the trip was to connect L.A. to their sister city of Nagoya. “It was really rewarding because even though, there was that language barrier between us, it was like wow they know about us and we know about them through our sister cities,” Tatulyan said.

“He has a positive outlook on life and is the type of perso who sees the glass half full,” -Isha Pasricha ASO President

Another culture shock for Tatulyan was in the food that he was served. “When we hear about Japanese food, we think the basic ramen and sushi, but it was interesting to see how much miso soup they had. Every meal you had miso soup, rice and pickles,” Tatulyan said. “It was like wow no wonder they are so healthy, every meal was balanced and had probiotics to help digest everything.” Tatulyan said the MAYA students all bonded and formed a sense of community. “Along with the other LACCD students who went, we still stay in touch,” Tatulyan said. “We all connected to the point where we want to go on another experience like that.” Tatulyan also has been

Nick Martinez / Roundup Harut Tatulyan sits by the fountain outside the CAS building holding a Maneki-Neko at Pierce College Woodland HIlls, Calif. on Feb. 25, 2019. It was one of the souviners he bought during his trip to Japan, it is supposed to bring in good luck and fortune. tutoring the logical philosophy courses since last spring at the Center for Academic Success (CAS). “It’s really good because not only does it connect them to you as a tutor, but it connects them to the tutoring center at Pierce,” Tatulyan said. “So, if they need any other tutoring they are more inclined to come in versus a student who is a little more hesitant.” Crystal Kiekel, the Director of the CAS, said Tatulyan is super informed, very amicable and a very successful Philosophy

tutor who is well respected by his colleagues. “I think one of the reasons he gets so many students is a combination of the fact that he is just a really welcoming and warm person,” Kiekel said. “He is just the sort of person who is going to say hi to you if you walked by and he is going to ask you how you are doing.” Tatulyan said the MAYA program is a good opportunity for college students looking to travel abroad. “No one would expect that this program, that would pay for

their tuition is also maybe one day, going to allow me to travel internationally,” Tatulyan said. “It’s a rewarding opportunity especially for students who don’t have this opportunity otherwise.” If he had the opportunity to travel again, Tatulyan said that he would return to Japan or another Asian country. “Honestly I want to go back to Japan, especially now that I’ve started to learn japanese,” Tatulyan said. “If it came down to a different country, I like the idea of more exploration in Southeast Asia.”

Tatulyan also stated that he doesn’t want to be stuck in one place and not be able to travel. “Whatever job I have, I don’t want to be in one city, one country, I want to travel around,” Tatulyan said. Isha Pasricha, the Associated Student Organization (ASO) President sums up the kind of person who Tatulyan is. “He has a positive outlook on life and is the type of person who sees the glass half full,” Pasricha said. gwong.roundupnews@gmail.com