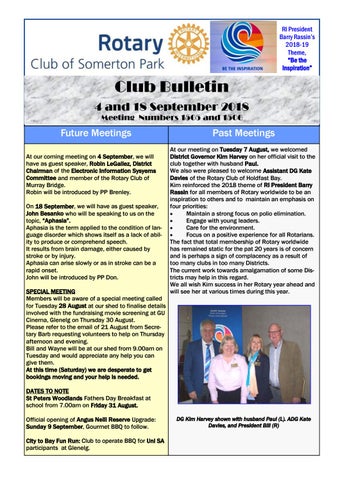 Future Meetings At our coming meeting on 4 September, we will have as guest speaker, Robin LeGallez, District Chairman of the Electronic Information Sysyems Committee and member of the Rotary Club of Murray Bridge. Robin will be introduced by PP Brenley. On 18 September, we will have as guest speaker, John Besanko who will be speaking to us on the topic, “Aphasia”. Aphasia is the term applied to the condition of language disorder which shows itself as a lack of ability to produce or comprehend speech. It results from brain damage, either caused by stroke or by injury. Aphasia can arise slowly or as in stroke can be a rapid onset. John will be introduced by PP Don. SPECIAL MEETING Members will be aware of a special meeting called for Tuesday 28 August at our shed to finalise details involved with the fundraising movie screening at GU Cinema, Glenelg on Thursday 30 August. Please refer to the email of 21 August from Secretary Barb requesting volunteers to help on Thursday afternoon and evening. Bill and Wayne will be at our shed from 9.00am on Tuesday and would appreciate any help you can give them. At this time (Saturday) we are desperate to get bookings moving and your help is needed.

Past Meetings At our meeting on Tuesday 7 August, we welcomed District Governor Kim Harvey on her official visit to the club together with husband Paul. We also were pleased to welcome Assistant DG Kate Davies of the Rotary Club of Holdfast Bay. Kim reinforced the 2018 theme of RI President Barry Rassin for all members of Rotary worldwide to be an inspiration to others and to maintain an emphasis on four priorities:  Maintain a strong focus on polio elimination.  Engage with young leaders.  Care for the environment.  Focus on a positive experience for all Rotarians. The fact that total membership of Rotary worldwide has remained static for the pat 20 years is of concern and is perhaps a sign of complacency as a result of too many clubs in too many Districts. The current work towards amalgamation of some Districts may help in this regard. We all wish Kim success in her Rotary year ahead and will see her at various times during this year.

The Benevolent Society had early support in South Australia from Sir Thomas Elder for the construction of housing for those in genuine need. A special general meeting of the club was called for Our speaker, Joel Pringle is an advocate for the BeTuesday 14 August at our shed. nevolent Society, particularly in its quest to fix penMembers of the club Board met first to discuss a num- sion poverty in Australia. Too many people past reber of matters and this meeting will be summarised tirement age are experiencing poverty which should elsewhere in this Bulletin. not be happening in our society. The general meeting discussed plans as to how we Many retirees are solely dependent on the Age Pencan make best use of an offer from Andrew Taplin to sion as they did not have the opportunity to qualify donate 500 tickets at the GU Cinema, Glenelg for the for any form of superannuation during their working screening of “Mission Impossible-Fallout” as a fundlife. Any increase in government pension would be raiser for Fighting for our Farmers in this time of sespent immediately and act as a stimulant to the vere drought. economy. The donated movie tickets are available for the 4pm, As it is now, Pension Poverty throughout the country 6pm and 7pm screenings on Thursday 30 August. is increasing. The fundraising event will be known as “NO MISSION IS IMPOSSIBLE” and tickets are to be booked online Supporting Joel, and emphasising the needs of through eventbrite.com.au many Australian Seniors, Ian Henschke spoke to us Tickets as organised this way are free of charge, funds from his position as Chief Advocate of National raised will be through donations on entry and raffles. Seniors Australia. National Seniors has 130 000 Because of the need for this meeting, it has been members across Australia in 120 Branches and counted as Meeting number 1503 of the club. would be the leading voice for older Australians no matter what their means. At our meeting on 21 August, we had as guest speak- Ian obviously brings his media skills to this position ers, Joel Pringle and Ian Henschke who were speaking in advocating for all senior Australians. on behalf of the Benevolent Society in support of a campaign to end Pension Poverty in Australia. It was pleasing to welcome John Diercks as a visitor The Benevolent Society promotes itself as Australia’s to the meeting, introduced by PP Frank and also to first charity, starting in Sydney in 1813 and in South see Pat once again, introduced by President Bill. Australia in 1849.

Ian Henschke shown in an earlier life as a broadcaster on ABC Radio. 2

Club Bulletin 4 and 18 September 2018 URGENT ATTENTION It has become URGENT for all of us to promote and support our Movie Night fundraiser on 30 August. Reserve your bookings online, print off and bring to the cinema with you. Make a donation at the door on entry and enjoy the movie. Remember, every dollar will go into the Rotary Fighting Fund to support farmers who are being affected by the current drought.

Summary of Special Board Meeting 14 August As well as discussing actions needed for the movie night on 30 August “No Mission is Impossible”, the following items were considered. 

Youth Music Awards/Fundraiser, Brighton Secondary School PP Frank has met with head of Music, Andrew Barrett and they will organise a concert in mid to late November in their auditorium (380 capacity) at $10 per ticket. We will provide prizes and share concert takings on night. Board agreed to proceed.

A stock of white wine will be purchased from Patriti Wines to on sell together with the Langmeil red wine in October. (Frank)

Networking with Probus Clubs Frank advised that he would like to resume our liaison with the Village Combined Probus Club and perhaps other Probus Clubs in this Area. The Board agreed to proceed further.

2018 Travel Raffle Wayne Leaves is now distributing tickets for our annual raffle. The cost of prizes, ticket printing and administrative costs will be met from ticket sales by our members and we ask that you all take some books to sell so we can meet this commitment. Most of the tickets have been distributed to those organisations who have indicated their interest in selling tickets and thus benefiting by the full amount of tickets they sell. Please see Wayne ASAP

THE FOUR WAY TEST OF THE THINGS WE Is it the TRUTH? THINK, SAY OR DO Is it FAIR to all Concerned?