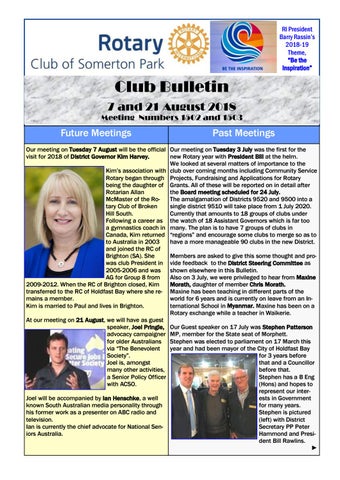 Our meeting on Tuesday 7 August will be the official Our meeting on Tuesday 3 July was the first for the visit for 2018 of District Governor Kim Harvey. new Rotary year with President Bill at the helm. We looked at several matters of importance to the Kim’s association with club over coming months including Community Service Rotary began through Projects, Fundraising and Applications for Rotary being the daughter of Grants. All of these will be reported on in detail after Rotarian Allan the Board meeting scheduled for 24 July. McMaster of the RoThe amalgamation of Districts 9520 and 9500 into a tary Club of Broken single district 9510 will take place from 1 July 2020. Hill South. Currently that amounts to 18 groups of clubs under Following a career as the watch of 18 Assistant Governors which is far too a gymnastics coach in many. The plan is to have 7 groups of clubs in Canada, Kim returned “regions” and encourage some clubs to merge so as to to Australia in 2003 have a more manageable 90 clubs in the new District. and joined the RC of Brighton (SA). She Members are asked to give this some thought and prowas club President in vide feedback to the District Steering Committee as 2005-2006 and was shown elsewhere in this Bulletin. AG for Group 8 from Also on 3 July, we were privileged to hear from Maxine 2009-2012. When the RC of Brighton closed, Kim Morath, daughter of member Chris Morath. transferred to the RC of Holdfast Bay where she re- Maxine has been teaching in different parts of the mains a member. world for 6 years and is currently on leave from an InKim is married to Paul and lives in Brighton. ternational School in Myanmar. Maxine has been on a Rotary exchange while a teacher in Waikerie. At our meeting on 21 August, we will have as guest speaker, Joel Pringle, Our Guest speaker on 17 July was Stephen Patterson advocacy campaigner MP, member for the State seat of Morphett. for older Australians Stephen was elected to parliament on 17 March this via “The Benevolent year and had been mayor of the City of Holdfast Bay Society”. for 3 years before Joel is, amongst that and a Councillor many other activities, before that. a Senior Policy Officer Stephen has a B Eng with ACSO. (Hons) and hopes to represent our interJoel will be accompanied by Ian Henschke, a well ests in Government known South Australian media personality through for many years. his former work as a presenter on ABC radio and Stephen is pictured television. (left) with District Ian is currently the chief advocate for National SenSecretary PP Peter iors Australia. Hammond and President Bill Rawlins. ►

Stephen went on to say that the electorate boundary changes made before the 17 March elections reflected the percentage popular vote in the number of seats won by the Liberals to form Government. Eleven new Liberals are now in parliament with a diverse range of backgrounds.  With Stephen’s electrical engineering background, he has indicated his interest in a National Energy Bill now in its early stages of discussion. From a member’s perspective, it was pleasing to meet  and hear from our new State member for the seat of Morphett.

At or meeting on Tuesday 17 July, we were pleased to welcome Matthew Rechner, Melissa Priest and Annun-  ziata Thompson from the City of Holdfast Bay as members representing the Corporate Membership  held by the City of Holdfast Bay. It is pleasing to know that the our link with the Holdfast bay Council is reinforced by this corporate membership and we look forward to a long term beneficial  cooperative relationship.

Key Points from Board Meeting 24 July For complete information, including financial report, please refer to detailed minutes prepared by PP Rosalien . Board meeting held at our Shed   

The newly upgraded Angus Neil Reserve will be officially opened on Sunday 9 September. Council has requested that we cook an up market BBQ for the event. Council will provide food to cook. Maybe we ask for gold coin donation. Progress photos are being taken by Robert Morgan and are posted on our web site. PP Brenley advised that Caitlyn Russell has applied for NYSF 2019. We will sponsor but she still has to go through the selection process. “Soap Aid” is operating under a new model where hotels are asked to pay a fee on collection. Our collection role has now ceased. “Women’s Health” project information received by President Bill will be referred to a Group 8 meeting as a possible combined project. President Bill met with Greg Pattinson from Foodbank to discuss our future involvement with them. Our next social evening will be at the Glenelg Surf Lifesaving Club from 6.00pm on Friday 10 August. Possible future outings were tabled by Director, PP Rosalien. PP Brenley will update the Social Media options fro the club. Minda Awards Night this year will be on 31 August at the Stamford Grand. President Bill and PP Max will attend on behalf of the club. PP Max advised that despite considerable effort, he could not get any response from Brighton Secondary School students for a “One and All” sailing experience next January. PP Frank outlined a number of possible fundraising activities during the year. Langmiel Wine Labelling will be on 10 November. PP Trevor advised that he has contacted PDG Jerry Casburn re approval of a District Grant to help fund a LED danger warning sign on Glenelg beach. PP Don O and PP John Y to sort through club archives to put into good order for future use.

Club Bulletin 7 and 21 August 2018 District Conference 2019 District Conference for 2019 will be in Broken Hill from 5 to 7 April. Because events held in Broken Hill are always popular, PP Jim Stevens has booked 12 rooms at the Old Willyama Motor Inn, Iodide Street, Broken Hill, for the duration of the conference at $145 per night. Jim has advised that there are now only 4 rooms left so please contact him on jlstev@bigpond.net.au ASAP if you are interested in making a booking. The conference website at: www.rotary9520.org/sitepage/district-9520conference-2019 is very useful in providing general conference information.

Club Annual Subscriptions Annual Club subscriptions of $200 became due on 1 July and may be paid in one amount or in two instalments of $100. One instalment is due now with the other becoming due on 1 January 2019. Please pay direct to Treasurer Brenton or by EFT into our Club Service Account. BSB 085 333, Account number 205083444 Please add your name to make identification possible.

Christmas Raffle Under the guidance of Wayne Leaves and PP Max Dalrymple, our annual Christmas raffle is underway. Tickets have been printed and are now being distributed to those organisations who have indicated their interest in selling tickets and thus benefiting by the full amount of tickets sold. Club members are asked to help by selling tickets as before with the full amount going into club funds less the cost of setting up the raffle. Costs will be the licence fee and ticket printing. Thanks go to Wayne and Max for taking on this job and members are asked to give them their support.

District Merger The steering committee consisting of representatives from Districts 9500 and 9520 welcomes suggestions from members of clubs in both Districts intended to make the new District 9510 work better from 1 July 2020. Bear in mind that the merging of Districts will probably coincide with the merging of some existing clubs but there will likely still be some 90 clubs in the new District. That’s large in population and large in area too. Some suggestions have already been made to help manage District 9510 but more are very welcome. Please send to steeringcom@rotary9510.org

THE FOUR WAY TEST OF THE THINGS WE Is it the TRUTH? THINK, SAY OR DO Is it FAIR to all Concerned?