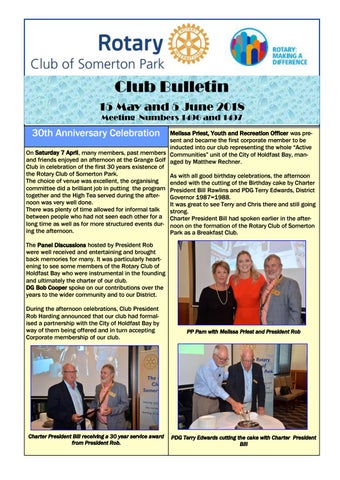 Melissa Priest, Youth and Recreation Officer was present and became the first corporate member to be inducted into our club representing the whole â&#x20AC;&#x153;Active On Saturday 7 April, many members, past members Communitiesâ&#x20AC;? unit of the City of Holdfast Bay, manand friends enjoyed an afternoon at the Grange Golf aged by Matthew Rechner. Club in celebration of the first 30 years existence of the Rotary Club of Somerton Park. As with all good birthday celebrations, the afternoon The choice of venue was excellent, the organising ended with the cutting of the Birthday cake by Charter committee did a brilliant job in putting the program President Bill Rawlins and PDG Terry Edwards, District together and the High Tea served during the afterGovernor 1987=1988. noon was very well done. It was great to see Terry and Chris there and still going There was plenty of time allowed for informal talk strong. between people who had not seen each other for a Charter President Bill had spoken earlier in the afterlong time as well as for more structured events dur- noon on the formation of the Rotary Club of Somerton ing the afternoon. Park as a Breakfast Club. The Panel Discussions hosted by President Rob were well received and entertaining and brought back memories for many. It was particularly heartening to see some members of the Rotary Club of Holdfast Bay who were instrumental in the founding and ultimately the charter of our club. DG Bob Cooper spoke on our contributions over the years to the wider community and to our District. During the afternoon celebrations, Club President Rob Harding announced that our club had formalised a partnership with the City of Holdfast Bay by way of them being offered and in turn accepting Corporate membership of our club.

Future Meetings Our next meeting will be on Tuesday 15 May at the Motel. The speaker will be member Wayne Leaves, talking to us about his life and achievements. At the following meeting on 5 June, we will have Zel Whiting, “Artist on the Park” in Darwin. How Peter Thompson gets in contact with such a variety of people is a mystery but we always benefit from the experiences.

Please note the venue for our Quiz night is Club Holdfast which is behind the Holdfast Bay Bowls and Croquet Club, corner of Anzac Highway and Tapleys Hill Road.

District Assembly Please note that District Assembly will be on Sunday 27 May 2018 at Unity College, 45 Owl Drive Murray Bridge from 9.00am to 4.00pm. Refer to your individual invitation from District Secretary Peter Hammond emailed on 29 April. Booking are essential and your emailed RSVP would be appreciated by Monday 21 May. District Assembly each year is the important way that Rotarians can receive significant update information on both RI and District matters which will help each club to operate smoothly during the year ahead. Many focus areas will be discussed and there will be updates on the creation of District 9510 from the current Districts 9520 and 9500. Both President Rob and President elect Bill will be attending and would appreciate your support in attending as well. Both Bill and Rob have space in their vehicles if you would like a ride to Murray Bridge on the 27 May.

Our meeting on 17 April was at our shed, Stopford Road Brighton. The Motel was unavailable that morning and our scheduled guest speaker was ill. We all enjoyed a cooked breakfast courtesy Bill and Brett Rawlins. Thank you both for your work. We had the opportunity to view our “Wild Dog Awareness” video which makes quite an impact. It was Club Assembly on 1 May where Directors and members had the opportunity to expand on activities from the previous month or so. President Rob and PP Trevor both outlined the progress on “Fund my Neighbourhood” projects under our control. The Bike Pump Track additions are well on schedule and surplus money will be available for us to proceed with landscaping on Tuesday 22 May. A contractor has been approved for the Angus Neale playground upgrade and work should start soon.

Meeting Numbers Although we no longer place great emphasis on club meeting numbers, I did not originally include our recent 30th Anniversary meeting as an “official” meeting and did not apply a meeting number to it. The event was well and truly an official meeting and has been recorded as meeting number 1495 of the Rotary Club of Somerton Park. 2

Club Bulletin 15 May and 5 June 2018 Summary of Board Meeting 1 May 2018 Please refer to the email of 7 May from Minutes Secretary Rosalien for the full minutes and Director’s reports. President Rob is acknowledged with thanks for the preparation of this summary.  Approval has been gained from Holdfast Bay Council for a 900x1500 Club sign to be placed on the fence adjacent to the Brighton Oval Skate Park on Brighton Road.  Cathy Miller, CEO of Minda Inc has accepted our offer for Minda Inc to become the second corporate member of our club. The offer is on the same terms as that accepted by the City of Holdfast Bay.  The Club has purchased beautifully designed tennis shirts for Somerton Park Tennis Club blind players. These were presented to the players by President Rob and Marianne at a small ceremony on 20 March.  Mark Huddleston launched his book, “Creatures of Habit” at the recent District Conference. This is well worth a read and Peter Ochota has a copy that members can peruse before perhaps buying.  Pres elect Bill is exploring possible sites for another Money Spinner.  A social evening for members, partners and friends will be held at the Glenelg Surf Lifesaving Club on Friday 11 May from 6.00pm.  A lunch at the “Taste of the Himalayas” is scheduled for a Sunday in July as thanks for their prize for our Quiz Night.  A request to run a BBQ at UniSA West Campus on 11 May was accepted with Marianne to organise.  Planning for our revamped major raffle is underway A significant prize has been obtained (1 week holiday in Mildura). Looking to broaden ticket distribution base.  The club will provide 5 copies of our Wild Dog Awareness video for members to show to outside people when travelling.

Changeover Lunch President elect Bill has advised that the Changeover function this year will be a lunch at the Glenelg Golf Club on Sunday 24 June. Details will follow but please note this date in your diary now.

Landscaping Working Bee As mentioned on page 2 of this Bulletin, there will be a small surplus of money available after the major additions to the Brighton Bike Pump Track have been completed. This will allow the purchase of shrubs etc for the landscaping of the areas adjacent to the Shelter, seating and BBQ. Members who are available are invited to assist in this landscaping work on Tuesday 22 May commencing at 9.00am. This is not a meeting Tuesday and if the weather is bad, the work can be done on the following Tuesday, 28 May. A BBQ lunch will follow.

Wild Dog Awareness Video Thanks to the generosity of friends of the club, Margie and Nigel, they have donated 6 USB memory sticks which have been used to record our “Wild Dog Awareness” video. These are available from Secretary Barb for members to take and show to anyone interested.

My Life and Times

Artist in the Park Darwin