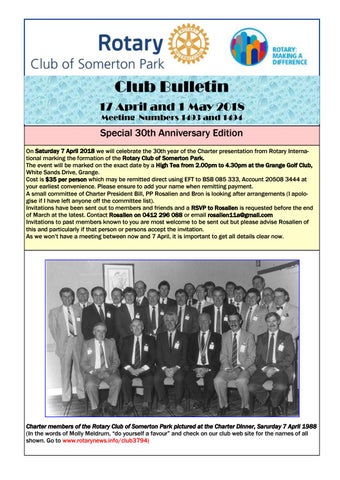 Special 30th Anniversary Edition On Saturday 7 April 2018 we will celebrate the 30th year of the Charter presentation from Rotary International marking the formation of the Rotary Club of Somerton Park. The event will be marked on the exact date by a High Tea from 2.00pm to 4.30pm at the Grange Golf Club, White Sands Drive, Grange. Cost is $35 per person which may be remitted direct using EFT to BSB 085 333, Account 20508 3444 at your earliest convenience. Please ensure to add your name when remitting payment. A small committee of Charter President Bill, PP Rosalien and Bron is looking after arrangements (I apologise if I have left anyone off the committee list). Invitations have been sent out to members and friends and a RSVP to Rosalien is requested before the end of March at the latest. Contact Rosalien on 0412 296 088 or email rosalien11a@gmail.com Invitations to past members known to you are most welcome to be sent out but please advise Rosalien of this and particularly if that person or persons accept the invitation. As we won’t have a meeting between now and 7 April, it is important to get all details clear now.

Charter members of the Rotary Club of Somerton Park pictured at the Charter Dinner, Sarurday 7 April 1988 (In the words of Molly Meldrum, “do yourself a favour” and check on our club web site for the names of all shown. Go to www.rotarynews.info/club3794)

As a follow on from the 30th Anniversary coverage on page 1 of this Bulletin, current members are aware that our club was chartered on 7 April 1988.

The meeting normally scheduled for Tuesday 3 April has been cancelled and the next club meeting will be on Tuesday 17 April at the Motel. Guest speaker will be Richard Venus, well known, In August 1987, then District Governor, Terry Edwards informative, and entertaining local historian. approached the Immediate Past President of the RC Richard is well known because of his published of Holdfast Bay, Peter Shipp with a view to forming work “Engineering a City” and has spoken to us on another Rotary Club in the Glenelg area and to be a this topic some years ago. Breakfast club. His topic this time will be on the life and times of Sir It was recognised that asking busy people to give up Charles Todd, engineer in charge of the building of another night each week to Rotary was a difficult ask. the overland telegraph line between Port Augusta The popularity of early morning meetings overseas, and Darwin, thus linking Australia with the rest of particularly the USA, was beginning to become evident the world in 1872. here too. Our next meeting on 1 May will be Club Assembly Peter Shipp asked PP Peter Clatidge to take on the for Directors to present information regarding their job of forming the new club. Peter C agreed providing portfolios and to outline coming events. he could choose his own committee. A summary of the Board meeting of March is This committee consisted of PP Peter Claridge, PP printed on page of this Bulletin for your information. Jack Maskell plus Rotarians Peter Cox and Ray Edwards, both of the RC of Holdfast Bay. Following Club Assembly, the club Board will meet. A meeting of the committee was called at Peter Claridge’s office. Present were members of the organising committee plus PP Peter Shipp, DG Terry Edwards, PDG Jeff Nankivell and PP Alan Yelland of District Extension Committee. Agreement to proceed Many thanks are extended to PP Rosalien van Loon was reached and a meeting of interested people was for accepting the position of Minutes Secretary for Club Board meetings. held at Partridge House on 14 October 1987. This reduces the workload of our hard working Club Peter Claridge was appointed as DG’s special representative in the new club with a brief to continue for a Secretary Barb and is much appreciated by all members. year after Charter.

The new club began to meet weekly under the Interim Presidency of Bill Rawlins. The club met for breakfast at Bill’s Motel, the Patawalonga Motor Inn. Charter by Rotary International took place at a dinner held at the Marion Hotel on Saturday 7 April 1988 with Bill Rawlins inducted as Charter President to 30 June 1989.

Removal of Election Posters The removal of election posters for now sitting member for the seat of Gibson, Corey Wingard, took place on Sunday 18 March and this went very well. Five teams of members and families participated and the job was completed in a few hours. Many thanks go to all who helped. 2

With the next Club Assembly due on 1 May, the following summary of the previous Board Meeting may be useful to members. For complete information, including Director’s reports, please refer to the email from Secretary Barb on 15 March. President Rob is acknowledged with thanks for the preparation of this summary.  Approval has been gained from DPTI to place a 900x1500 Club sign on the roadside fence adjacent to the Brighton Bike Pump Track.  The Board resolved that “Friends of Rotary” for our club be established, commencing 1 July 2018. Clear guidelines will be developed to differentiate between Rotarian and friend.  The Club’s 30th Anniversary will be celebrated at a High Tea at Grange Golf Club, 2,00pm to 4.30pm on Saturday 7 April.. Rosalien to lead the planning committee.  A3 Club display posters to be attached to Money Spinner in Bayside Village. Bill to investigate further sites for more Money Spinners.  Succinct Committee Role Staements being prepared by each Director.  Board agreed to Rob offering corporate membership to Minda on the same basis as for City of Holdfast Bay.  Rosalien was accompanied by 8 women, Rotarians, partners and friends at a Morning Tea at Ninko. Rosalien to prioritise ways we may assist Ninko women.  A Social evening on 16 February at Seacliff SLSC was well attended but was considered too noisy. Bron to look at having next one at the Nepalese restaurant on Brighton Road as thanks for their first prize donation for our Quiz Night.  Marianne’s International Service Committee was given approval for donations to Shelterbox $1000, ROMAC $400, Hamlyn Fistula $340, Operation Cleft $250. Support for a School Bus in Peru was also discussed. ►

Trevor advised that our application for a District Grant of $2000 to help fund Safety signs on Glenelg beach was rejected. Trevor will resubmit the application with additional information. Brenley advised that several students who we have supported will speak at our meetings over the next few months. Next Bunnings BBQ will be on Tuesday 24 April. Quiz night will be on 25 May. Marianne and committee are looking for prizes to be donated. Chistmas raffle is to proceed provided all prizes offered are donated. Member ticket sales should not be used for purchase of prizes. A cooked breakfast at meetings is to continue on 3rd Tuesday of month. Members are asked to start at 7.00am to avoid too much noise over Guest Speaker’s presentation. Bi monthly club meetings are to continue following the trial period. Rosalien was thanked for her offer to be Minutes Secretary.

Quiz Night 25 May Our annual Quiz Night will be held on Friday 25 May at the Somerton Bowling Club. Committee coordinator Marianne Harding is seeking help from members to obtain donations of items which can be used as prizes on the night, also higher value items for silent auction. Please give this your attention and advise Marianne of your success.

Charles Todd– “More than the Telegraph”

Will it be BENEFICIAL to all concerned?