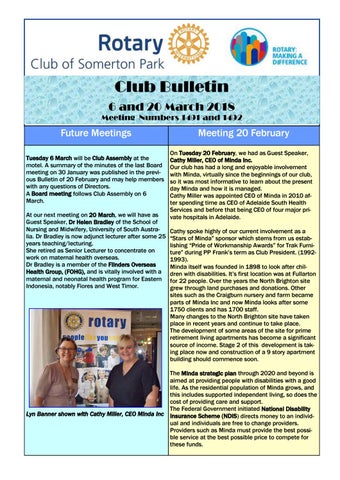 Future Meetings Tuesday 6 March will be Club Assembly at the motel. A summary of the minutes of the last Board meeting on 30 January was published in the previous Bulletin of 20 February and may help members with any questions of Directors. A Board meeting follows Club Assembly on 6 March. At our next meeting on 20 March, we will have as Guest Speaker, Dr Helen Bradley of the School of Nursing and Midwifery, University of South Australia. Dr Bradley is now adjunct lecturer after some 25 years teaching/lecturing. She retired as Senior Lecturer to concentrate on work on maternal health overseas. Dr Bradley is a member of the Flinders Overseas Health Group, (FOHG), and is vitally involved with a maternal and neonatal health program for Eastern Indonesia, notably Fiores and West Timor.

Meeting 20 February On Tuesday 20 February, we had as Guest Speaker, Cathy Miller, CEO of Minda Inc. Our club has had a long and enjoyable involvement with Minda, virtually since the beginnings of our club, so it was most informative to learn about the present day Minda and how it is managed. Cathy Miller was appointed CEO of Minda in 2010 after spending time as CEO of Adelaide South Health Services and before that being CEO of four major private hospitals in Adelaide. Cathy spoke highly of our current involvement as a “Stars of Minda” sponsor which stems from us establishing “Pride of Workmanship Awards” for Trak Furniture” during PP Frank’s term as Club President. (19921993). Minda itself was founded in 1898 to look after children with disabilities. It’s first location was at Fullarton for 22 people. Over the years the North Brighton site grew through land purchases and donations. Other sites such as the Craigburn nursery and farm became parts of Minda Inc and now Minda looks after some 1750 clients and has 1700 staff. Many changes to the North Brighton site have taken place in recent years and continue to take place. The development of some areas of the site for prime retirement living apartments has become a significant source of income. Stage 2 of this development is taking place now and construction of a 9 story apartment building should commence soon.

The Minda strategic plan through 2020 and beyond is aimed at providing people with disabilities with a good life. As the residential population of Minda grows, and this includes supported independent living, so does the cost of providing care and support. The Federal Government initiated National Disability Lyn Banner shown with Cathy Miller, CEO Minda Inc Insurance Scheme (NDIS) directs money to an individual and individuals are free to change providers. Providers such as Minda must provide the best possible service at the best possible price to compete for these funds.

Club Bulletin 6 and 20 March 2018 Orange Sky Laundry Fundraiser, Sunday 25 February On Sunday 25 February, we were asked to run a fundraising barbecue for the Orange Sky Laundry at Trinity Uniting Church, Goodwood Road, Clarence Park. This was in conjunction with an Adelaide fringe event being conducted at the same venue. Members attending reported a successful outcome.

The Orange Sky Laundry van is available to wash and dry clothing and other belongings of homeless people across the metropolitan area. We will have someone from Orange Sky talk to the club a little later in the year.

Our Club Board has accepted a fundraising job of removing election posters from stobie poles etc in the State electorate of Gibson for sitting member and candidate Corey Wingard. These posters will need to be removed within 48 hours after polling day, Hopefully most of the work can be done on Sunday 18 March. We will receive a fee of $500 for the removal of about 500 posters. Please contact President Rob ASAP if you can help and refer to his email of 27 February for more detail.

District Conference Members are reminded that late bookings for this yearâ&#x20AC;&#x2122;s Conference in the Barossa Valley close on Friday 16 March. The Conference is a combined Districts 9500 and 9520 event and runs from 23 to 25 March. Please note that the two Districts will officially combine from 1 July 2020 to form new District 9510.

Minutes Secretary The Club is in desperate need of someone to take on the role of Minute Secretary for Board Meetings. This will take some of the workload from our hard working Club Secretary Barb. Any member interested please contact Barb or President Rob.

The Four Way Test CLUB MEETINGS Of The Things We Think, Say or Do: Is itMONTH the TRUTH? OF EACH at 7.00am