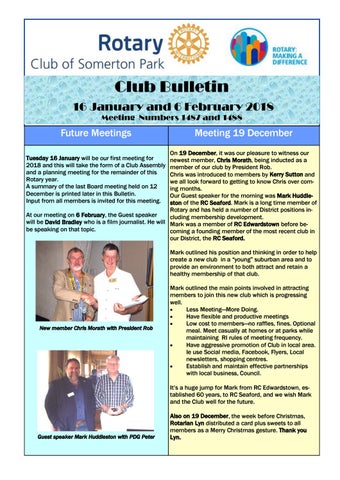 On 19 December, it was our pleasure to witness our newest member, Chris Morath, being inducted as a member of our club by President Rob. Chris was introduced to members by Kerry Sutton and we all look forward to getting to know Chris over coming months. Our Guest speaker for the morning was Mark Huddleston of the RC Seaford. Mark is a long time member of Rotary and has held a number of District positions inAt our meeting on 6 February, the Guest speaker cluding membership development. will be David Bradley who is a film journalist. He will Mark was a member of RC Edwardstown before bebe speaking on that topic. coming a founding member of the most recent club in our District, the RC Seaford. Tuesday 16 January will be our first meeting for 2018 and this will take the form of a Club Assembly and a planning meeting for the remainder of this Rotary year. A summary of the last Board meeting held on 12 December is printed later in this Bulletin. Input from all members is invited for this meeting.

Mark outlined his position and thinking in order to help create a new club in a “young” suburban area and to provide an environment to both attract and retain a healthy membership of that club.

Also on 19 December, the week before Christmas, Rotarian Lyn distributed a card plus sweets to all members as a Merry Christmas gesture. Thank you Lyn.

The final Board meeting for 2017 was held on Tuesday 12 December and the following is a summary of discussions and decisions made at that meeting. 

Bill and Rob have checked out possible sites for placement of a Club fence sign and have identified a preferred location. The sign will emphasise that our club is a breakfast club. Rob will liaise with Council for approval of this site or an appropriate alternative. It was agreed that we should aim to regularly change the sign above our “Money Spinner’ at Bayside Village Mall. A stand to hold our brochures will be attached. Malcolm and Rob to follow up. Peter Ochota elaborated on the desirability of Corporate membership. Different members of each business or corporation could attend meetings. In the first instance, Rob will speak with officers of Holdfast Bay Council to test interest. A process is underway to involve all members of committees in clearly describing their committee’s role. The activities of our club over the past month have been very extensive. These include breakfast meetings, community service, fundraising and fellowship. Please refer to the complete minutes for full details. President Rob attended a Group 8 President’s meeting on 8 December. One outcome was the decision to highlight the many special events coming in the firdt half of 2018. These include : RC Edwardseown 60th anniversary on 18 March, RC Somerton Park 30th on 7 April and RC Holdfast Bay 40th on 21 May. 20 Christmas hampers were purchased from FoodBank and distributed to ne edy families via schools suggested by Foodbank staff. Completion of the refurbishing of outdoor furniture for Ninko plus delivery of doll’s house will be arranged for early in the new year. ►

The visit to clipper ship “City of Adelaide” and Christmas lunch at pur shed were both well received. PDG Peter is arranging a club “health check” and asks that all members complete forms. It was agreed that all new members will have a mentor appointed; normally the person who introduced the new member. The RC Flagstaff Hill is conducting a project to collect used bra for the women of Fiji. Our club is asked to help and a speaker from RC Flagstaff Hill will give us more detail shortly. Our club was successful in obtaining funding via “Fund my Neighbourhood” initiative. Brighton Bike Pump Track upgrade: $46830, plus stage 2 of the Angus Neale Playground on the Esplanade at Seacliff: $100 000. Trevor and Rob will be working closely with Holdfast Bay Council on both. Brenley compiled a comprehensive list of Youth and Vocational initiatives which is very pleasing. We are mentoring a young person embarking on the “One and All” Youth Sailing experience. There will be someone from the club at Port Adelaide on 21 January to farewell our nominated young person. Advanced planning for 2018 includes: 27 February, Dinner meetng with speaker Tony Lufti, manufacturer of “superfood”, roasted greenwheat. Tony is a past president of RC Adelaide East. 7 April, Club ‘s 30th anniversary dinner at “Taste of the Himalayas”, Ideas and general feedback meeting on Tuesday 16 January.

General Feedback requested: Is this summary of Board Minutes of use to members?

Club Bulletin 16 January and 6 February 2018 Rotary Subscriptions Now Due Members who pay their annual subs half yearly are reminded that the second half fee of $100 is now due. This amount may be paid by cash or cheque to Treasurer Brenton or transferred electronically to club Service Account at: BSB 085 333, a/c number 205083444

Membership Development Following our meeting of 19 December with Guest speaker Mark Huddleston, PDG Peter has circulated to all members by email on 11 January, a “Rotarian Needs Assessment” form. Members are asked to print off this form and fill out details according to instructions. Please return your completed form to President Rob ASAP.

President elect Nominee At our AGM on 5 December, the future position of Club President for the 2019-2020 Rotary year was not filled. It is desirable that this club leadership position be filled by a member who has had a few year’s experience in club activities and some experience as a Board member. President-elect Bill has contacted some members with a view to filling this position and would be very pleased to hear from those who are interested.

Please note that the 2018 District Conference will be held in the Barossa Valley from 23 to 25 March. This will be a combined D9500 and D9520 conference and is the first exercise in the process of merging the two Districts See President Rob re caravan park bookings.

Club Assembly and Welcome Back

The Four Way Test CLUB MEETINGS Of The Things We Think, Say or Do: Is itMONTH the TRUTH? OF EACH at 7.00am