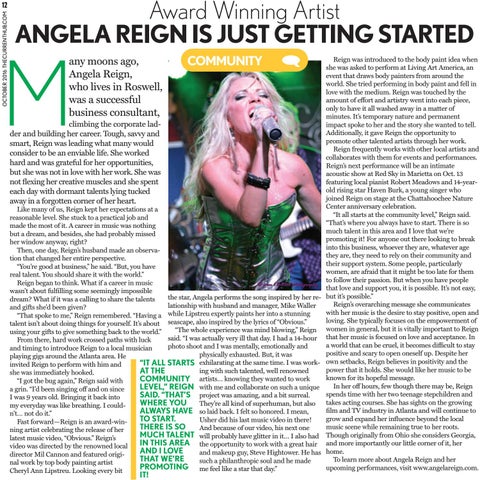 Award Winning Artist ANGELA REIGN IS JUST GETTING STARTED any moons ago, Angela Reign, who lives in Roswell, was a successful business consultant,

climbing the corporate ladder and building her career. Tough, savvy and smart, Reign was leading what many would consider to be an enviable life. She worked hard and was grateful for her opportunities, but she was not in love with her work. She was not ﬂexing her creative muscles and she spent each day with dormant talents lying tucked away in a forgotten corner of her heart. Like many of us, Reign kept her expectations at a reasonable level. She stuck to a practical job and made the most of it. A career in music was nothing but a dream, and besides, she had probably missed her window anyway, right? Then, one day, Reign’s husband made an observation that changed her entire perspective. “You’re good at business,” he said. “But, you have real talent. You should share it with the world.” Reign began to think. What if a career in music wasn’t about fulﬁlling some seemingly impossible the star, Angela performs the song inspired by her redream? What if it was a calling to share the talents lationship with husband and manager, Mike Waller and gifts she’d been given? “That spoke to me,” Reign remembered. “Having a while Lipstreu expertly paints her into a stunning talent isn’t about doing things for yourself. It’s about seascape, also inspired by the lyrics of “Obvious.” “The whole experience was mind blowing,” Reign using your gifts to give something back to the world.” said. “I was actually very ill that day. I had a 14-hour From there, hard work crossed paths with luck photo shoot and I was mentally, emotionally and and timing to introduce Reign to a local musician physically exhausted. But, it was playing gigs around the Atlanta area. He “IT ALL STARTS exhilarating at the same time. I was workinvited Reign to perform with him and ing with such talented, well renowned AT THE she was immediately hooked. COMMUNITY artists… knowing they wanted to work “I got the bug again,” Reign said with LEVEL,” REIGN with me and collaborate on such a unique a grin. “I’d been singing off and on since SAID. “THAT’S project was amazing, and a bit surreal. I was 9 years old. Bringing it back into WHERE YOU They’re all kind of superhuman, but also my everyday was like breathing. I couldALWAYS HAVE so laid back. I felt so honored. I mean, n’t… not do it.” TO START. Usher did his last music video in there! Fast forward—Reign is an award-winTHERE IS SO And because of our video, his next one ning artist celebrating the release of her MUCH TALENT will probably have glitter in it… I also had latest music video, “Obvious.” Reign’s IN THIS AREA the opportunity to work with a great hair video was directed by the renowned local AND I LOVE and makeup guy, Steve Hightower. He has director Mil Cannon and featured origiTHAT WE’RE such a philanthropic soul and he made nal work by top body painting artist PROMOTING me feel like a star that day.” Cheryl Ann Lipstreu. Looking every bit

Reign was introduced to the body paint idea when she was asked to perform at Living Art America, an event that draws body painters from around the world. She tried performing in body paint and fell in love with the medium. Reign was touched by the amount of effort and artistry went into each piece, only to have it all washed away in a matter of minutes. It’s temporary nature and permanent impact spoke to her and the story she wanted to tell. Additionally, it gave Reign the opportunity to promote other talented artists through her work. Reign frequently works with other local artists and collaborates with them for events and performances. Reign’s next performance will be an intimate acoustic show at Red Sky in Marietta on Oct. 13 featuring local pianist Robert Meadows and 14-yearold rising star Haven Burk, a young singer who joined Reign on stage at the Chattahoochee Nature Center anniversary celebration. “It all starts at the community level,” Reign said. “That’s where you always have to start. There is so much talent in this area and I love that we’re promoting it! For anyone out there looking to break into this business, whoever they are, whatever age they are, they need to rely on their community and their support system. Some people, particularly women, are afraid that it might be too late for them to follow their passion. But when you have people that love and support you, it is possible. It’s not easy, but it’s possible.” Reign’s overarching message she communicates with her music is the desire to stay positive, open and loving. She typically focuses on the empowerment of women in general, but it is vitally important to Reign that her music is focused on love and acceptance. In a world that can be cruel, it becomes difﬁcult to stay positive and scary to open oneself up. Despite her own setbacks, Reign believes in positivity and the power that it holds. She would like her music to be known for its hopeful message. In her off hours, few though there may be, Reign spends time with her two teenage stepchildren and takes acting courses. She has sights on the growing ﬁlm and TV industry in Atlanta and will continue to grow and expand her inﬂuence beyond the local music scene while remaining true to her roots. Though originally from Ohio she considers Georgia, and more importantly our little corner of it, her home. To learn more about Angela Reign and her upcoming performances, visit www.angelareign.com. 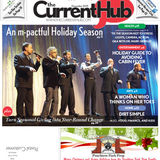