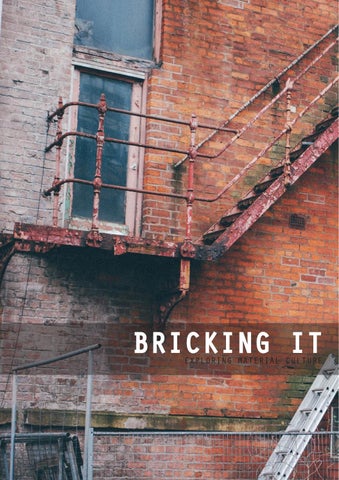 WHAT’S AHEAD... THE ROUTE / DISCOVERIES ALONG THE WAY GREAT FINDS A CATALOGUE OF BRICKS SIZING UP COLOUR SCHEMES HULME RELATED BRICK IN MCR: THE STOCKPORT VIADUCT WORK THAT BRICK

SIZING UP: THE MEASUREMENTS On our exploration of Manchester we measured various bricks in order to decipher the mode dimensions used. Of the bricks we identified the most common brick measured in at 215mm by 65mm.

JUST YOUR AVERAGE BRICK Through the exploration of the different brick types found in Manchester, we have established an average brick that Manchester holds. The brick is simple, a brown/red colour with average dimensions of 65 x 215.

THE BRICK CULTURE WITHIN HULME

Many of the buildings within Hulme, use a variety of brick. Housing typology mainly have bricks as their main source of materiality. However, these brick types differ in colour, texture and patterning to describe the differentiating use.

MANCHESTERâ&amp;#x20AC;&amp;#x2122;S BRICK FEATS THE STOCKPORT VIADUCT One of the best examples of brick work in manchester can be recognised in the stockport viaduct, the largest brick structure in europe. Designed by George Watson Buck for the Manchester to Birmingham railway in 1840, the viaduct sits at a height of 33.85 metres. As a feat of Victorian engineering the viaduct was once the largest in the world, it now still remains as one of the worlds largest brick structures.

INSPIRING BRICK PRECEDENTS FROM AROUND THE WORLD

LSE STUDENT CENTRE The saw swee hock student centre at london school of economics is a large predominantly brick form which is used as a music venue, cafe, student union, offices, religious space, dance studio, library and a gym. The architects have worked with the small back streets of lunch to create a building which pulls pedestrian street life into the building. In response to their use of brick the architect said ‘Red brick was used to construct the walls of the building using a typical Flemish bond. In some places the material forms solid walls, while in others it creates perforated screens across windows’ they continue saying “The perforated planes are constructed from a single leaf of brickwork with spaces in the Flemish bond pattern to allow light to both infiltrate the interior spaces and filtrate out at night to create a pattern effect”.

LYRIC THEATRE The lyric theatre is situated in belfast within the landscape of belfastâ&amp;#x20AC;&amp;#x2122;s brick streets and the serpentine parkland of the river lagan. The building is designed in response to this landscape on a minimum budget. The architect uses brick to create three acoustically isolated brick boxes which are tied together through entrances and the street-scape.

THREE COURTYARD COMMUNITY CENTRE The three courtyard community centre is by AZL architects and situated in Yangzhou, China. The building is used for recreation, meeting spaces and dining for surrounding residents. The building is designed in such a way to create a village atmosphere. The red brick is what ties the project to the site, using locally sourced red clay bricks made from the local riverbed. The bricks are used in both structure and facade, with patternsreflectingthelocalbuildingculture.

SJ OFFICE BUILDING The architect says of the building that â&amp;#x20AC;&amp;#x2DC;The concept of this project is a segment consisting of mass of traditional bricks to better express the stacked concept of time.â&amp;#x20AC;&amp;#x2122; By using the stacking building method which brick allows for, they have used it in such a way to represent concept. The brick is used in conjunction with concrete meaning the brick plays more of a facade decorative role within this architecture.

THE EXTENT OF THE TRADING WORLD OF BRICKS

A. Brick has superior moisture control properties B. It is sourced from natural materials C. It is non-combustible D. Brick requires less maintenance than other resources E. The material has great thermal mass properties. A 30% energy saving when compared to wood F. When thicker than 4.5 inches, the material can sound insulate up to 45 decibels. Over 9 inches it can ins late against 50 decibels G. Waste products created in brick manufacturing can be recycled/reused H. The material can protect against high wind I. There is a huge variety of bricks, ranging in colours, texture and size 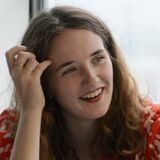