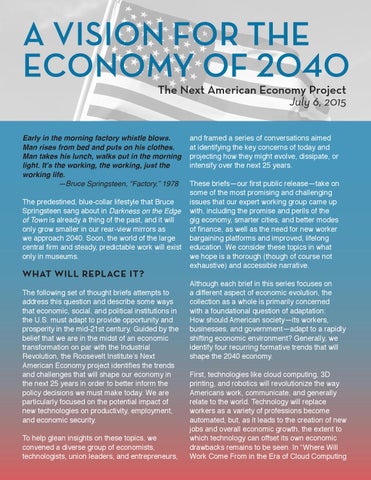 Early in the morning factory whistle blows. Man rises from bed and puts on his clothes. Man takes his lunch, walks out in the morning light. It&#39;s the working, the working, just the working life. —Bruce Springsteen, “Factory,” 1978 The predestined, blue-collar lifestyle that Bruce Springsteen sang about in Darkness on the Edge of Town is already a thing of the past, and it will only grow smaller in our rear-view mirrors as we approach 2040. Soon, the world of the large central firm and steady, predictable work will exist only in museums.

WHAT WILL REPLACE IT? The following set of thought briefs attempts to address this question and describe some ways that economic, social, and political institutions in the U.S. must adapt to provide opportunity and prosperity in the mid-21st century. Guided by the belief that we are in the midst of an economic transformation on par with the Industrial Revolution, the Roosevelt Institute’s Next American Economy project identifies the trends and challenges that will shape our economy in the next 25 years in order to better inform the policy decisions we must make today. We are particularly focused on the potential impact of new technologies on productivity, employment, and economic security. To help glean insights on these topics, we convened a diverse group of economists, technologists, union leaders, and entrepreneurs,

and framed a series of conversations aimed at identifying the key concerns of today and projecting how they might evolve, dissipate, or intensify over the next 25 years. These briefs—our first public release—take on some of the most promising and challenging issues that our expert working group came up with, including the promise and perils of the gig economy, smarter cities, and better modes of finance, as well as the need for new worker bargaining platforms and improved, lifelong education. We consider these topics in what we hope is a thorough (though of course not exhaustive) and accessible narrative. Although each brief in this series focuses on a different aspect of economic evolution, the collection as a whole is primarily concerned with a foundational question of adaptation: How should American society—its workers, businesses, and government—adapt to a rapidly shifting economic environment? Generally, we identify four recurring formative trends that will shape the 2040 economy. First, technologies like cloud computing, 3D printing, and robotics will revolutionize the way Americans work, communicate, and generally relate to the world. Technology will replace workers as a variety of professions become automated, but, as it leads to the creation of new jobs and overall economic growth, the extent to which technology can offset its own economic drawbacks remains to be seen. In “Where Will Work Come From in the Era of Cloud Computing 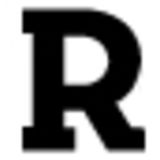