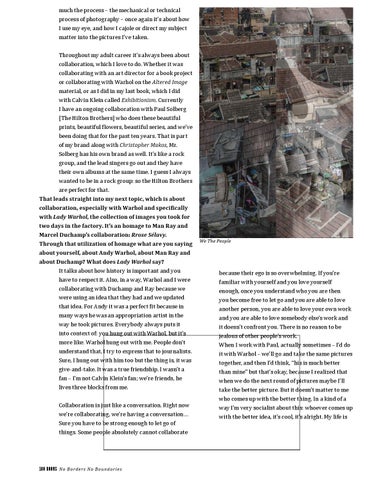 much the process – the mechanical or technical

process of photography – once again it’s about how I use my eye, and how I cajole or direct my subject matter into the pictures I’ve taken.

Throughout my adult career it’s always been about collaboration, which I love to do. Whether it was

prints, beautiful flowers, beautiful series, and we’ve been doing that for the past ten years. That is part of my brand along with Christopher Makos, Mr.

Solberg has his own brand as well. It’s like a rock group, and the lead singers go out and they have

their own albums at the same time. I guess I always

wanted to be in a rock group: so the Hilton Brothers are perfect for that.

That leads straight into my next topic, which is about

collaboration, especially with Warhol and specifically with Lady Warhol, the collection of images you took for two days in the factory. It’s an homage to Man Ray and Marcel Duchamp’s collaboration: Rrose Sélavy. Through that utilization of homage what are you saying

about yourself, about Andy Warhol, about Man Ray and about Duchamp? What does Lady Warhol say? It talks about how history is important and you

have to respect it. Also, in a way, Warhol and I were collaborating with Duchamp and Ray because we were using an idea that they had and we updated that idea. For Andy it was a perfect fit because in many ways he was an appropriation artist in the way he took pictures. Everybody always puts it

understand that, I try to express that to journalists. Sure, I hung out with him too but the thing is, it was give-and-take. It was a true friendship. I wasn’t a fan – I’m not Calvin Klein’s fan; we’re friends, he lives three blocks from me.

Collaboration is just like a conversation. Right now we’re collaborating, we’re having a conversation… Sure you have to be strong enough to let go of

180 ROOMS No Borders No Boundar ies

because their ego is so overwhelming. If you’re familiar with yourself and you love yourself

enough, once you understand who you are then

When I work with Paul, actually sometimes – I’d do

it with Warhol – we’ll go and take the same pictures together, and then I’d think, “his is much better

than mine” but that’s okay, because I realized that when we do the next round of pictures maybe I’ll

take the better picture. But it doesn’t matter to me who comes up with the better thing. In a kind of a

way I’m very socialist about this: whoever comes up with the better idea, it’s cool, it’s alright. My life is 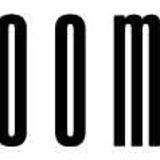 The Colour of Sound

The Colour of Sound