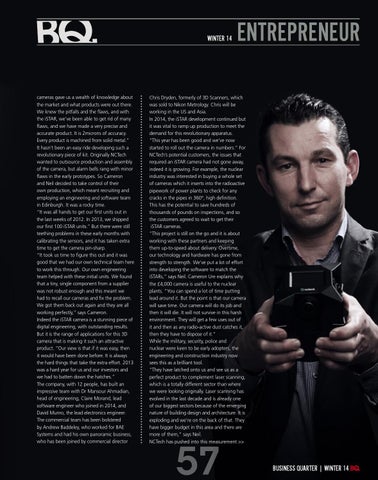 cameras gave us a wealth of knowledge about the market and what products were out there. We knew the pitfalls and the flaws, and with the iSTAR, we’ve been able to get rid of many flaws, and we have made a very precise and accurate product. It is 2microns of accuracy. Every product is machined from solid metal.” It hasn’t been an easy ride developing such a revolutionary piece of kit. Originally NCTech wanted to outsource production and assembly of the camera, but alarm bells rang with minor flaws in the early prototypes. So Cameron and Neil decided to take control of their own production, which meant recruiting and employing an engineering and software team in Edinburgh. It was a rocky time. “It was all hands to get our first units out in the last weeks of 2012. In 2013, we shipped our first 100 iSTAR units.” But there were still teething problems in these early months with calibrating the sensors, and it has taken extra time to get the camera pin-sharp. “It took us time to figure this out and it was good that we had our own technical team here to work this through. Our own engineering team helped with these initial units. We found that a tiny, single component from a supplier was not robust enough and this meant we had to recall our cameras and fix the problem. We got them back out again and they are all working perfectly,” says Cameron. Indeed the iSTAR camera is a stunning piece of digital engineering, with outstanding results. But it is the range of applications for this 3D camera that is making it such an attractive product. “Our view is that if it was easy, then it would have been done before. It is always the hard things that take the extra effort. 2013 was a hard year for us and our investors and we had to batten down the hatches.” The company, with 12 people, has built an impressive team with Dr Mansour Ahmadian, head of engineering, Claire Morand, lead software engineer who joined in 2014, and David Munro, the lead electronics engineer. The commercial team has been bolstered by Andrew Baddeley, who worked for BAE Systems and had his own panoramic business, who has been joined by commercial director

Chris Dryden, formerly of 3D Scanners, which was sold to Nikon Metrology. Chris will be working in the US and Asia. In 2014, the iSTAR development continued but it was vital to ramp up production to meet the demand for this revolutionary apparatus. “This year has been good and we’ve now started to roll out the camera in numbers.” For NCTech’s potential customers, the issues that required an iSTAR camera had not gone away, indeed it is growing. For example, the nuclear industry was interested in buying a whole set of cameras which it inserts into the radioactive pipework of power plants to check for any cracks in the pipes in 360°, high definition. This has the potential to save hundreds of thousands of pounds on inspections, and so the customers agreed to wait to get their iSTAR cameras. “This project is still on the go and it is about working with these partners and keeping them up-to-speed about delivery. Overtime, our technology and hardware has gone from strength to strength. We’ve put a lot of effort into developing the software to match the iSTARs,” says Neil. Cameron Ure explains why the £4,000 camera is useful to the nuclear plants. “You can spend a lot of time putting lead around it. But the point is that our camera will save time. Our camera will do its job and then it will die. It will not survive in this harsh environment. They will get a few uses out of it and then as any radio-active dust catches it, then they have to dispose of it.” While the military, security, police and nuclear were keen to be early adopters, the engineering and construction industry now sees this as a brilliant tool. “They have latched onto us and see us as a perfect product to complement laser scanning, which is a totally different sector than where we were looking originally. Laser scanning has evolved in the last decade and is already one of our biggest sectors because of the emerging nature of building design and architecture. It is exploding and we’re on the back of that. They have bigger budget in this area and there are more of them,” says Neil. NCTech has pushed into this measurement &gt;&gt;

Welcome to Business Quarter Scotland. We hope you find something enjoyable and thought-provoking to read in this issue. As we prepare to enter 2015, we can take a moment to reflect on 2014 as an astonishing year for Scotland. From the vibrancy of the Scottish Referendum to the outstanding Glasgow Commonwealth Games, the glorious Ryder Cup, and welcoming Year of Homecoming, we have certainly put Scotland on the global map like never before. We’ve all had plenty of opportunity to consider what it means to be modern Scots in a global world. But there are big challenges for our ‘shiny country’, as one of our BQ Live Debate participant described Scotland. 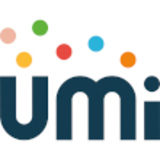