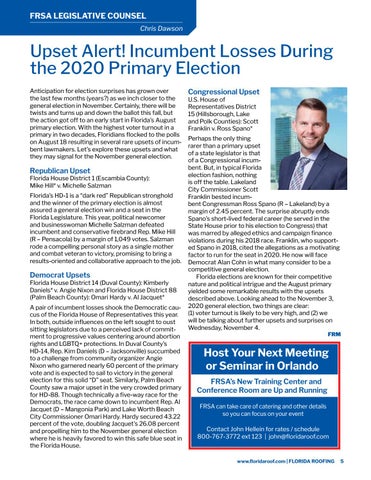 Upset Alert! Incumbent Losses During the 2020 Primary Election Anticipation for election surprises has grown over the last few months (years?) as we inch closer to the general election in November. Certainly, there will be twists and turns up and down the ballot this fall, but the action got off to an early start in Florida’s August primary election. With the highest voter turnout in a primary in two decades, Floridians flocked to the polls on August 18 resulting in several rare upsets of incumbent lawmakers. Let’s explore these upsets and what they may signal for the November general election.

Florida House District 1 (Escambia County): Mike Hill* v. Michelle Salzman Florida’s HD-1 is a “dark red” Republican stronghold and the winner of the primary election is almost assured a general election win and a seat in the Florida Legislature. This year, political newcomer and businesswoman Michelle Salzman defeated incumbent and conservative firebrand Rep. Mike Hill (R – Pensacola) by a margin of 1,049 votes. Salzman rode a compelling personal story as a single mother and combat veteran to victory, promising to bring a results-oriented and collaborative approach to the job.

Florida House District 14 (Duval County): Kimberly Daniels* v. Angie Nixon and Florida House District 88 (Palm Beach County): Omari Hardy v. Al Jacquet* A pair of incumbent losses shook the Democratic caucus of the Florida House of Representatives this year. In both, outside influences on the left sought to oust sitting legislators due to a perceived lack of commitment to progressive values centering around abortion rights and LGBTQ+ protections. In Duval County’s HD-14, Rep. Kim Daniels (D – Jacksonville) succumbed to a challenge from community organizer Angie Nixon who garnered nearly 60 percent of the primary vote and is expected to sail to victory in the general election for this solid “D” seat. Similarly, Palm Beach County saw a major upset in the very crowded primary for HD-88. Though technically a five-way race for the Democrats, the race came down to incumbent Rep. Al Jacquet (D – Mangonia Park) and Lake Worth Beach City Commissioner Omari Hardy. Hardy secured 43.22 percent of the vote, doubling Jacquet’s 26.08 percent and propelling him to the November general election where he is heavily favored to win this safe blue seat in the Florida House.

Perhaps the only thing rarer than a primary upset of a state legislator is that of a Congressional incumbent. But, in typical Florida election fashion, nothing is off the table. Lakeland City Commissioner Scott Franklin bested incumbent Congressman Ross Spano (R – Lakeland) by a margin of 2.45 percent. The surprise abruptly ends Spano’s short-lived federal career (he served in the State House prior to his election to Congress) that was marred by alleged ethics and campaign finance violations during his 2018 race. Franklin, who supported Spano in 2018, cited the allegations as a motivating factor to run for the seat in 2020. He now will face Democrat Alan Cohn in what many consider to be a competitive general election. Florida elections are known for their competitive nature and political intrigue and the August primary yielded some remarkable results with the upsets described above. Looking ahead to the November 3, 2020 general election, two things are clear: (1) voter turnout is likely to be very high, and (2) we will be talking about further upsets and surprises on Wednesday, November 4.

Host Your Next Meeting or Seminar in Orlando FRSA’s New Training Center and Conference Room are Up and Running FRSA can take care of catering and other details so you can focus on your event Contact John Hellein for rates / schedule 800-767-3772 ext 123 | john@floridaroof.com 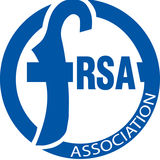