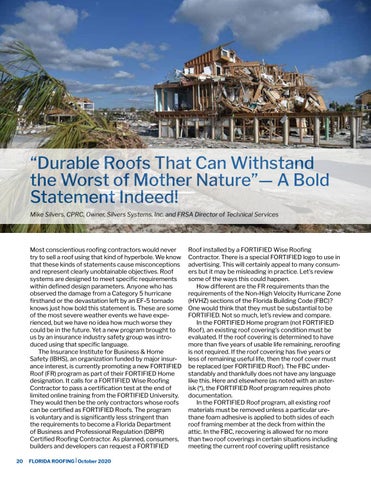 Most conscientious roofing contractors would never try to sell a roof using that kind of hyperbole. We know that these kinds of statements cause misconceptions and represent clearly unobtainable objectives. Roof systems are designed to meet specific requirements within defined design parameters. Anyone who has observed the damage from a Category 5 hurricane firsthand or the devastation left by an EF-5 tornado knows just how bold this statement is. These are some of the most severe weather events we have experienced, but we have no idea how much worse they could be in the future. Yet a new program brought to us by an insurance industry safety group was introduced using that specific language. The Insurance Institute for Business &amp; Home Safety (IBHS), an organization funded by major insurance interest, is currently promoting a new FORTIFIED Roof (FR) program as part of their FORTIFIED Home designation. It calls for a FORTIFIED Wise Roofing Contractor to pass a certification test at the end of limited online training from the FORTIFIED University. They would then be the only contractors whose roofs can be certified as FORTIFIED Roofs. The program is voluntary and is significantly less stringent than the requirements to become a Florida Department of Business and Professional Regulation (DBPR) Certified Roofing Contractor. As planned, consumers, builders and developers can request a FORTIFIED 20

Roof installed by a FORTIFIED Wise Roofing Contractor. There is a special FORTIFIED logo to use in advertising. This will certainly appeal to many consumers but it may be misleading in practice. Let’s review some of the ways this could happen. How different are the FR requirements than the requirements of the Non-High Velocity Hurricane Zone (HVHZ) sections of the Florida Building Code (FBC)? One would think that they must be substantial to be FORTIFIED. Not so much, let’s review and compare. In the FORTIFIED Home program (not FORTIFIED Roof), an existing roof covering’s condition must be evaluated. If the roof covering is determined to have more than five years of usable life remaining, reroofing is not required. If the roof covering has five years or less of remaining useful life, then the roof cover must be replaced (per FORTIFIED Roof). The FBC understandably and thankfully does not have any language like this. Here and elsewhere (as noted with an asterisk (*), the FORTIFIED Roof program requires photo documentation. In the FORTIFIED Roof program, all existing roof materials must be removed unless a particular urethane foam adhesive is applied to both sides of each roof framing member at the deck from within the attic. In the FBC, recovering is allowed for no more than two roof coverings in certain situations including meeting the current roof covering uplift resistance