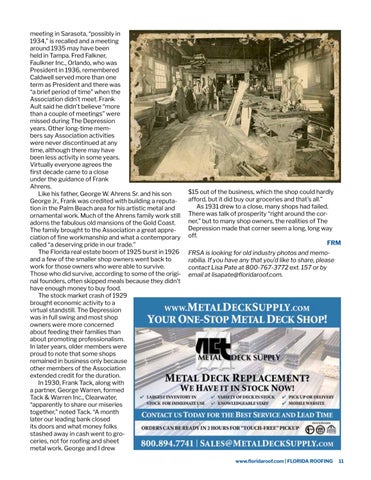 meeting in Sarasota, “possibly in 1934,” is recalled and a meeting around 1935 may have been held in Tampa. Fred Falkner, Faulkner Inc., Orlando, who was President in 1936, remembered Caldwell served more than one term as President and there was “a brief period of time” when the Association didn’t meet. Frank Ault said he didn’t believe “more than a couple of meetings” were missed during The Depression years. Other long-time members say Association activities were never discontinued at any time, although there may have been less activity in some years. Virtually everyone agrees the first decade came to a close under the guidance of Frank Ahrens. Like his father, George W. Ahrens Sr. and his son George Jr., Frank was credited with building a reputation in the Palm Beach area for his artistic metal and ornamental work. Much of the Ahrens family work still adorns the fabulous old mansions of the Gold Coast. The family brought to the Association a great appreciation of fine workmanship and what a contemporary called “a deserving pride in our trade.” The Florida real estate boom of 1925 burst in 1926 and a few of the smaller shop owners went back to work for those owners who were able to survive. Those who did survive, according to some of the original founders, often skipped meals because they didn’t have enough money to buy food. The stock market crash of 1929 brought economic activity to a virtual standstill. The Depression was in full swing and most shop owners were more concerned about feeding their families than about promoting professionalism. In later years, older members were proud to note that some shops remained in business only because other members of the Association extended credit for the duration. In 1930, Frank Tack, along with a partner, George Warren, formed Tack &amp; Warren Inc., Clearwater, “apparently to share our miseries together,” noted Tack. “A month later our leading bank closed its doors and what money folks stashed away in cash went to groceries, not for roofing and sheet metal work. George and I drew

$15 out of the business, which the shop could hardly afford, but it did buy our groceries and that’s all.” As 1931 drew to a close, many shops had failed. There was talk of prosperity “right around the corner,” but to many shop owners, the realities of The Depression made that corner seem a long, long way off. FRM FRSA is looking for old industry photos and memorabilia. If you have any that you’d like to share, please contact Lisa Pate at 800-767-3772 ext. 157 or by email at lisapate@floridaroof.com.