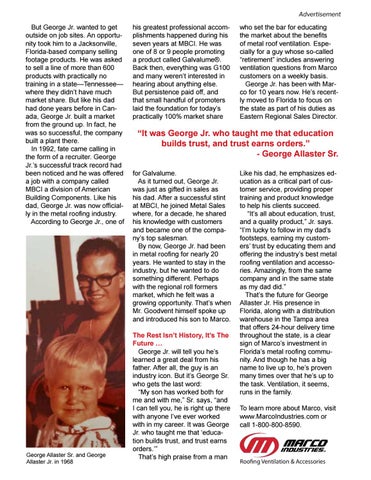 But George Jr. wanted to get outside on job sites. An opportunity took him to a Jacksonville, Florida-based company selling footage products. He was asked to sell a line of more than 600 products with practically no training in a state—Tennessee— where they didn’t have much market share. But like his dad had done years before in Canada, George Jr. built a market from the ground up. In fact, he was so successful, the company built a plant there. In 1992, fate came calling in the form of a recruiter. George Jr.’s successful track record had been noticed and he was offered a job with a company called MBCI a division of American Building Components. Like his dad, George Jr. was now officially in the metal roofing industry. According to George Jr., one of

his greatest professional accomplishments happened during his seven years at MBCI. He was one of 8 or 9 people promoting a product called Galvalume®. Back then, everything was G100 and many weren’t interested in hearing about anything else. But persistence paid off, and that small handful of promoters laid the foundation for today’s practically 100% market share

who set the bar for educating the market about the benefits of metal roof ventilation. Especially for a guy whose so-called “retirement” includes answering ventilation questions from Marco customers on a weekly basis. George Jr. has been with Marco for 10 years now. He’s recently moved to Florida to focus on the state as part of his duties as Eastern Regional Sales Director.

Like his dad, he emphasizes education as a critical part of customer service, providing proper training and product knowledge to help his clients succeed. “It’s all about education, trust, and a quality product,” Jr. says. “I’m lucky to follow in my dad’s footsteps, earning my customers’ trust by educating them and offering the industry’s best metal roofing ventilation and accessories. Amazingly, from the same company and in the same state as my dad did.” That’s the future for George Allaster Jr. His presence in Florida, along with a distribution warehouse in the Tampa area that offers 24-hour delivery time throughout the state, is a clear sign of Marco’s investment in Florida’s metal roofing community. And though he has a big name to live up to, he’s proven many times over that he’s up to the task. Ventilation, it seems, runs in the family. To learn more about Marco, visit www.MarcoIndustries.com or call 1-800-800-8590.