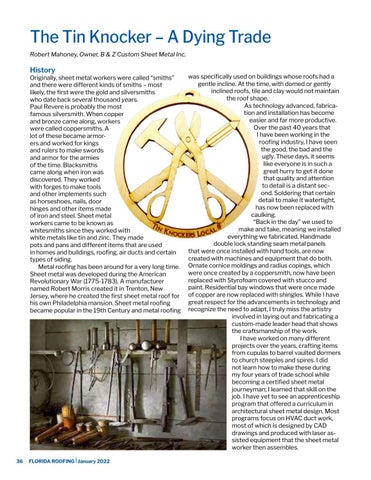 Originally, sheet metal workers were called “smiths” and there were different kinds of smiths – most likely, the first were the gold and silversmiths who date back several thousand years. Paul Revere is probably the most famous silversmith. When copper and bronze came along, workers were called coppersmiths. A lot of these became armorers and worked for kings and rulers to make swords and armor for the armies of the time. Blacksmiths came along when iron was discovered. They worked with forges to make tools and other implements such as horseshoes, nails, door hinges and other items made of iron and steel. Sheet metal workers came to be known as whitesmiths since they worked with white metals like tin and zinc. They made pots and pans and different items that are used in homes and buildings, roofing, air ducts and certain types of siding. Metal roofing has been around for a very long time. Sheet metal was developed during the American Revolutionary War (1775-1783). A manufacturer named Robert Morris created it in Trenton, New Jersey, where he created the first sheet metal roof for his own Philadelphia mansion. Sheet metal roofing became popular in the 19th Century and metal roofing

was specifically used on buildings whose roofs had a gentle incline. At the time, with domed or gently inclined roofs, tile and clay would not maintain the roof shape. As technology advanced, fabrication and installation has become easier and far more productive. Over the past 40 years that I have been working in the roofing industry, I have seen the good, the bad and the ugly. These days, it seems like everyone is in such a great hurry to get it done that quality and attention to detail is a distant second. Soldering that certain detail to make it watertight, has now been replaced with caulking. “Back in the day” we used to make and take, meaning we installed everything we fabricated. Handmade double lock standing seam metal panels that were once installed with hand tools, are now created with machines and equipment that do both. Ornate cornice moldings and radius copings, which were once created by a coppersmith, now have been replaced with Styrofoam covered with stucco and paint. Residential bay windows that were once made of copper are now replaced with shingles. While I have great respect for the advancements in technology and recognize the need to adapt, I truly miss the artistry involved in laying out and fabricating a custom-made leader head that shows the craftsmanship of the work. I have worked on many different projects over the years, crafting items from cupulas to barrel vaulted dormers to church steeples and spires. I did not learn how to make these during my four years of trade school while becoming a certified sheet metal journeyman; I learned that skill on the job. I have yet to see an apprenticeship program that offered a curriculum in architectural sheet metal design. Most programs focus on HVAC duct work, most of which is designed by CAD drawings and produced with laser assisted equipment that the sheet metal worker then assembles.

FRSA - 100 Years Strong, 2022 Buyers Guide, What is the Required R-Value for Insulation When Reroofing?, The Tin Knocker - A Dying Trade, FRSA-PAC - The Voice of Florida's Roofing Industry in Tallahassee