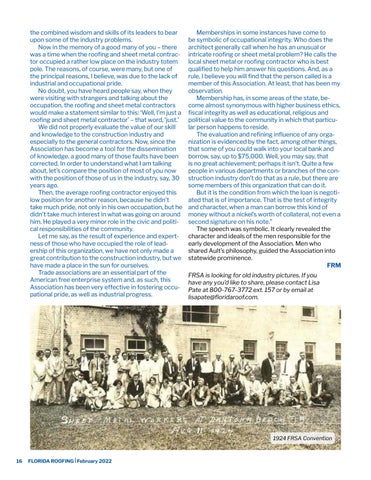 the combined wisdom and skills of its leaders to bear upon some of the industry problems. Now in the memory of a good many of you – there was a time when the roofing and sheet metal contractor occupied a rather low place on the industry totem pole. The reasons, of course, were many, but one of the principal reasons, I believe, was due to the lack of industrial and occupational pride. No doubt, you have heard people say, when they were visiting with strangers and talking about the occupation, the roofing and sheet metal contractors would make a statement similar to this: ‘Well, I’m just a roofing and sheet metal contractor’ – that word, ‘just.’ We did not properly evaluate the value of our skill and knowledge to the construction industry and especially to the general contractors. Now, since the Association has become a tool for the dissemination of knowledge, a good many of those faults have been corrected. In order to understand what I am talking about, let’s compare the position of most of you now with the position of those of us in the industry, say, 30 years ago. Then, the average roofing contractor enjoyed this low position for another reason, because he didn’t take much pride, not only in his own occupation, but he didn’t take much interest in what was going on around him. He played a very minor role in the civic and political responsibilities of the community. Let me say, as the result of experience and expertness of those who have occupied the role of leadership of this organization, we have not only made a great contribution to the construction industry, but we have made a place in the sun for ourselves. Trade associations are an essential part of the American free enterprise system and, as such, this Association has been very effective in fostering occupational pride, as well as industrial progress.

Memberships in some instances have come to be symbolic of occupational integrity. Who does the architect generally call when he has an unusual or intricate roofing or sheet metal problem? He calls the local sheet metal or roofing contractor who is best qualified to help him answer his questions. And, as a rule, I believe you will find that the person called is a member of this Association. At least, that has been my observation. Membership has, in some areas of the state, become almost synonymous with higher business ethics, fiscal integrity as well as educational, religious and political value to the community in which that particular person happens to reside. The evaluation and refining influence of any organization is evidenced by the fact, among other things, that some of you could walk into your local bank and borrow, say, up to $75,000. Well, you may say, that is no great achievement; perhaps it isn’t. Quite a few people in various departments or branches of the construction industry don’t do that as a rule, but there are some members of this organization that can do it. But it is the condition from which the loan is negotiated that is of importance. That is the test of integrity and character, when a man can borrow this kind of money without a nickel’s worth of collateral, not even a second signature on his note.” The speech was symbolic. It clearly revealed the character and ideals of the men responsible for the early development of the Association. Men who shared Ault’s philosophy, guided the Association into statewide prominence. FRM FRSA is looking for old industry pictures. If you have any you’d like to share, please contact Lisa Pate at 800-767-3772 ext. 157 or by email at lisapate@floridaroof.com.