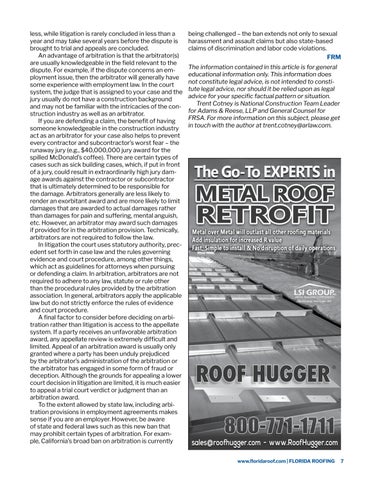 less, while litigation is rarely concluded in less than a year and may take several years before the dispute is brought to trial and appeals are concluded. An advantage of arbitration is that the arbitrator(s) are usually knowledgeable in the field relevant to the dispute. For example, if the dispute concerns an employment issue, then the arbitrator will generally have some experience with employment law. In the court system, the judge that is assigned to your case and the jury usually do not have a construction background and may not be familiar with the intricacies of the construction industry as well as an arbitrator. If you are defending a claim, the benefit of having someone knowledgeable in the construction industry act as an arbitrator for your case also helps to prevent every contractor and subcontractor’s worst fear – the runaway jury (e.g., $40,000,000 jury award for the spilled McDonald’s coffee). There are certain types of cases such as sick building cases, which, if put in front of a jury, could result in extraordinarily high jury damage awards against the contractor or subcontractor that is ultimately determined to be responsible for the damage. Arbitrators generally are less likely to render an exorbitant award and are more likely to limit damages that are awarded to actual damages rather than damages for pain and suffering, mental anguish, etc. However, an arbitrator may award such damages if provided for in the arbitration provision. Technically, arbitrators are not required to follow the law. In litigation the court uses statutory authority, precedent set forth in case law and the rules governing evidence and court procedure, among other things, which act as guidelines for attorneys when pursuing or defending a claim. In arbitration, arbitrators are not required to adhere to any law, statute or rule other than the procedural rules provided by the arbitration association. In general, arbitrators apply the applicable law but do not strictly enforce the rules of evidence and court procedure. A final factor to consider before deciding on arbitration rather than litigation is access to the appellate system. If a party receives an unfavorable arbitration award, any appellate review is extremely difficult and limited. Appeal of an arbitration award is usually only granted where a party has been unduly prejudiced by the arbitrator’s administration of the arbitration or the arbitrator has engaged in some form of fraud or deception. Although the grounds for appealing a lower court decision in litigation are limited, it is much easier to appeal a trial court verdict or judgment than an arbitration award. To the extent allowed by state law, including arbitration provisions in employment agreements makes sense if you are an employer. However, be aware of state and federal laws such as this new ban that may prohibit certain types of arbitration. For example, California’s broad ban on arbitration is currently

being challenged – the ban extends not only to sexual harassment and assault claims but also state-based claims of discrimination and labor code violations. FRM The information contained in this article is for general educational information only. This information does not constitute legal advice, is not intended to constitute legal advice, nor should it be relied upon as legal advice for your specific factual pattern or situation. Trent Cotney is National Construction Team Leader for Adams &amp; Reese, LLP and General Counsel for FRSA. For more information on this subject, please get in touch with the author at trent.cotney@arlaw.com.