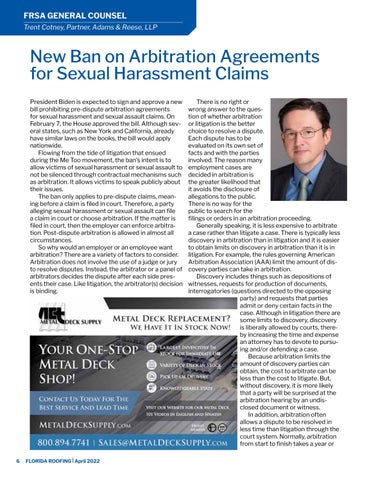 New Ban on Arbitration Agreements for Sexual Harassment Claims President Biden is expected to sign and approve a new bill prohibiting pre-dispute arbitration agreements for sexual harassment and sexual assault claims. On February 7, the House approved the bill. Although several states, such as New York and California, already have similar laws on the books, the bill would apply nationwide. Flowing from the tide of litigation that ensued during the Me Too movement, the ban’s intent is to allow victims of sexual harassment or sexual assault to not be silenced through contractual mechanisms such as arbitration. It allows victims to speak publicly about their issues. The ban only applies to pre-dispute claims, meaning before a claim is filed in court. Therefore, a party alleging sexual harassment or sexual assault can file a claim in court or choose arbitration. If the matter is filed in court, then the employer can enforce arbitration. Post-dispute arbitration is allowed in almost all circumstances. So why would an employer or an employee want arbitration? There are a variety of factors to consider. Arbitration does not involve the use of a judge or jury to resolve disputes. Instead, the arbitrator or a panel of arbitrators decides the dispute after each side presents their case. Like litigation, the arbitrator(s) decision is binding.

There is no right or wrong answer to the question of whether arbitration or litigation is the better choice to resolve a dispute. Each dispute has to be evaluated on its own set of facts and with the parties involved. The reason many employment cases are decided in arbitration is the greater likelihood that it avoids the disclosure of allegations to the public. There is no way for the public to search for the filings or orders in an arbitration proceeding. Generally speaking, it is less expensive to arbitrate a case rather than litigate a case. There is typically less discovery in arbitration than in litigation and it is easier to obtain limits on discovery in arbitration than it is in litigation. For example, the rules governing American Arbitration Association (AAA) limit the amount of discovery parties can take in arbitration. Discovery includes things such as depositions of witnesses, requests for production of documents, interrogatories (questions directed to the opposing party) and requests that parties admit or deny certain facts in the case. Although in litigation there are some limits to discovery, discovery is liberally allowed by courts, thereby increasing the time and expense an attorney has to devote to pursuing and/or defending a case. Because arbitration limits the amount of discovery parties can obtain, the cost to arbitrate can be less than the cost to litigate. But, without discovery, it is more likely that a party will be surprised at the arbitration hearing by an undisclosed document or witness. In addition, arbitration often allows a dispute to be resolved in less time than litigation through the court system. Normally, arbitration from start to finish takes a year or