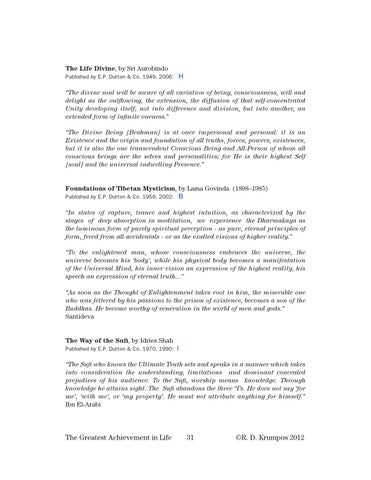 “The divine soul will be aware of all variation of being, consciousness, will and delight as the outflowing, the extension, the diffusion of that self-concentrated Unity developing itself, not into difference and division, but into another, an extended form of infinite oneness.” “The Divine Being [Brahman] is at once impersonal and personal: it is an Existence and the origin and foundation of all truths, forces, powers, existences, but it is also the one transcendent Conscious Being and All-Person of whom all conscious beings are the selves and personalities; for He is their highest Self [soul] and the universal indwelling Presence.” Foundations of Tibetan Mysticism, by Lama Govinda (1898–1985) Published by E.P. Dutton &amp; Co. 1959, 2002: B “In states of rapture, trance and highest intuition, as characterized by the stages of deep absorption in meditation, we experience the Dharmakaya as the luminous form of purely spiritual perception - as pure, eternal principles of form, freed from all accidentals - or as the exalted visions of higher reality.” “To the enlightened man, whose consciousness embraces the universe, the universe becomes his ‘body’, while his physical body becomes a manifestation of the Universal Mind, his inner vision an expression of the highest reality, his speech an expression of eternal truth...” “As soon as the Thought of Enlightenment takes root in him, the miserable one who was fettered by his passions to the prison of existence, becomes a son of the Buddhas. He become worthy of veneration in the world of men and gods.” Santideva The Way of the Sufi, by Idries Shah Published by E.P. Dutton &amp; Co. 1970, 1990:

“The Sufi who knows the Ultimate Truth sets and speaks in a manner which takes into consideration the understanding, limitations and dominant concealed prejudices of his audience. To the Sufi, worship means knowledge. Through knowledge he attains sight. The Sufi abandons the three “I’s. He does not say ‘for me’, ‘with me’, or ‘my property’. He must not attribute anything for himself.” Ibn El-Arabi

The Greatest Achievement in Life

The greatest achievement in life

The greatest achievement in life? Living in conscious oneness of ultimate reality (called by many names), found in Buddhist, Christian, Hindu, Kabbalah, Sufi, and comparative mysticism. This free ebook summarizes many similarities among those five traditions and outlines mystical approaches to life. 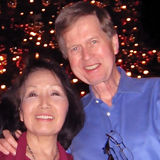