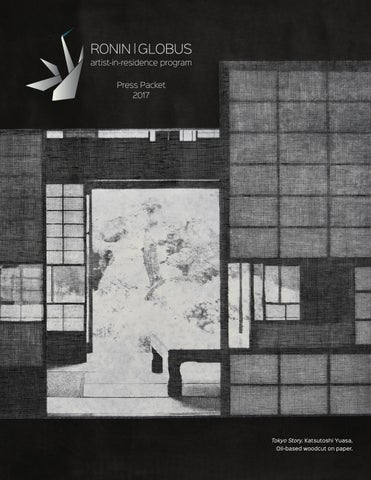 Hiroko Otake Ikeya Tomohide Mihoko Inazawa Toshihiko Ikeda Yuca Nishida Ronin Gallery and Globus Washitsu are pleased to announce that Katsutoshi Yuasa has been selected as the winner of the 2017 Ronin|Globus Artist-inResidence Program. The program judges were enchanted by Yuasa’s woodblock prints. His work presents a conversation between the contemporaneity of photography and the tradition of woodblock printmaking. As artist-in-residence, he will be the featured artist in Ronin Gallery’s fall exhibition, Contemporary Talents of Japan. In addition, he will receive a three-week stay at Globus Washitsu in central Manhattan, a tatami mat studio space, a stipend, and transportation between Tokyo and NYC. Nao Morigo was named first runner up, while Asako Iwasawa and Yoshihito Kawase both received honorable mentions. Several of their works will also be featured in the exhibition Contemporary Talents of Japan. Yuasa will be in New York in September and a reception for the artist will be held by Ronin Gallery. In addition, a portion of the proceeds raised by this year’s program will go to the Japan Society Gallery to further exhibitions of Japanese art.

ABOUT THE PROGRAM The annual Ronin|Globus Artist-in-Residence Program seeks to stimulate cross-cultural dialogue through Japan’s vanguard of visual art while providing the opportunity for emerging and mid-career Japanese visual artists to live, work, and exhibit in New York City.

The Ronin Gallery is the leading family-owned Japanese and East Asian art gallery in New York City. It is home to the largest private collection of 17th-21st century Japanese prints for sale in the United States, as well as many works by Japan’s and East Asia’s contemporary talents. For more information about the gallery and to access the gallery’s exhibits, visit: www.roningallery.com/

Globus Family The Globus Family has long been associated with cultural interchange between Japan and United States. They have sponsored events at eminent institutions including Japan Society and Asia Society. Their scope spans dance, theater, cinema, art, craft, and performance groups. Globus Washitsu is a venue to spark the expression, knowledge, and wonderment that arise from dialogue between Japan and the United States. For more information, visit: www.nycwashitsu.com/

Spoon & Tamago is a Japanese arts and culture blog that spans the categories of fine art and architecture, to product and graphic design. It was founded by Johnny Strategy in 2007 as a means of attracting international attention to the Japanese art and design scene, and is currently based out of New York City and Tokyo. For more information, visit: www.spoon-tamago.com/

Founded in 1907, Japan Society is a multidisciplinary hub and is among the premier institutions in the U.S. for the exhibition of Japanese art and culture. Since 1971, Japan Society’s Gallery exhibitions have spanned prehistory to the present. As an American nonprofit, nonpolitical organization, Japan Society cultivates a constructive, resonant, and dynamic relationship between the people of the U.S. and Japan.

Born in Tokyo in 1978, Katsutoshi Yuasa is a contemporary woodblock print artist. His work challenges the boundaries of tradition and technology. This interplay between the romantic and the straightforward—the emotional and the factual—is neither reality nor fiction: Yuasa creates a “neutral space… in a new dimension.” Yuasa received his BA in Fine Arts from Musashino Art University in 2002, where he studied painting and printmaking. He continued his study of printmaking in London, earning a MFA from the Royal College

of Art in 2005. Yuasa has taught, lectured, and led workshops throughout Europe and Asia. He has received numerous awards and scholarships, most recently, Grand Prize at the 2015 CWAJ 60th Print Show Anniversary. His work is actively exhibited in solo and group worldwide, can be found at the world’s foremost art fairs, and resides in prestigious collections, such as the Victoria & Albert Museum.

Nao Morigo Working in Kobe, Morigo began figurative painting in 1991 before turning to more conceptual art by 1999. In 2009, she began Trip to…, a series of world landscape paintings. As Nao weaves snippets of popular global media into her powerful collages, she evokes the connected nature of our world, both to each other and to nature.

Born in Tokyo, Kawase lives and works in Ibaraki, Japan. He holds a PhD in Japanese painting from Tokyo National University of the Arts.

Iwasawa is a contemporary painter from Tokyo, Japan. She graduated from Tama Art University, where she studied textile design.

Director of the Japan Society Gallery

Director of the Asia Society Museum

Founder of the One Piece Club

Manager of the Sato Sakura Museum