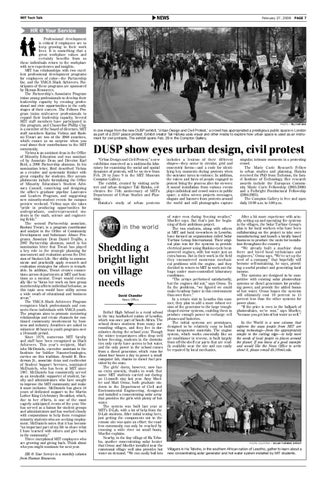 HR @ Your Service Professional development is critical if employees are to keep growing in their work lives. It is something that a great workplace values and certainly benefits from as these individuals return to the workplace with new experiences and insights. MIT has relationships with two excellent professional development programs for employees of color—the Partnership Inc. and the YMCA Black Achievers. Participants of these programs are sponsored by Human Resources. The Partnership’s Associates Program trains young professionals to develop their leadership capacity by creating professional and civic opportunities in the early stages of their careers. The Fellows Program trains mid-career professionals to expand their leadership capacity. Several MIT staff members have participated in this program, and Chancellor Phillip Clay is a member of the board of directors. MIT staff members Karina Vielma and Rashmi Tiwari are two of the 2008 awardees, which comes as no surprise when you read about their contributions to the MIT community. Vielma is an assistant dean in the Office of Minority Education and was nominated by Associate Dean and Director Karl Reid, a 2000 Partnership alumnus. In his nomination letter, Reid described Vielma as a creative and systematic thinker with great empathy for students. Her accomplishments include formalizing the Office of Minority Education’s Student Advisory Council, conceiving and designing the office’s graduate pipeline Laureates and Leaders Program, and suggesting new minority-student events for campus preview weekend. Vielma says she takes “pride in producing opportunities for undergraduate, underrepresented students in the math, science and engineering fields.” The second Partnership associate, Rashmi Tiwari, is a program coordinator and analyst in the Office of Community Development and Substance Abuse Programs. Associate Dean Daniel Trujillo, a 2007 Partnership alumnus, noted in his nomination letter that Tiwari has played a key role in the strategic planning for assessment and evaluation across the Division of Student Life. Her ability to communicate and practically apply research and evaluation strategies for others is remarkable. In addition, Tiwari creates connections across departments at MIT and functions as a mentor. Tiwari would eventually like to “focus her work on how group membership affects individual behavior, as this topic area would have utility across a wide swath of educational and business areas.” The YMCA Black Achievers Program recognizes black professionals and connects these individuals with YMCA youth. The program aims to promote mentoring relationships and create channels for continued community involvement by business and industry. Awardees are asked to volunteer 40 hours in youth programs over a 10-month period. Since 1979, numerous MIT faculty and staff have been recognized as Black Achievers. This year’s recipient, Marlisha McDaniels, executive assistant in the Institute for Soldier Nanotechnologies, carries on this tradition. Arnold R. Henderson Jr., associate dean and co-director of Student Support Services, nominated McDaniels, who has been at MIT since 1987. McDaniels has consistently served as an invaluable supporter of student, faculty and administrators who have sought to improve the MIT community and make it more inclusive. McDaniels has given 14 years of dedicated support to the Martin Luther King Celebratory Breakfast, which, due to her efforts, is one of the most eagerly anticipated events of the year. She has served as a liaison for student groups and administrators and has worked closely with corporations to help them recognize minority students who are seeking employment. McDaniels notes that it has become “an important part of my life to share what I have learned with others and give back to the community.” Three exceptional MIT employees who are growing and giving back. Think about who you might nominate for next year. HR @ Your Service is a monthly column from Human Resources.

In one image from the new DUSP exhibit, ‘Urban Design and Civil Protest,’ a crowd has appropriated a prestigious public space in London as part of a 2007 peace protest. Exhibit creator Tali Hatuka uses visual and other media to explore how urban space is used as an instrument for civil protests. The exhibit opens Feb. 28 in the Compton Gallery.

DUSP show eyes urban design, civil protest “Urban Design and Civil Protest,” a new exhibition conceived as a multimedia laboratory for examining the social and spatial dynamics of protests, will be on view from Feb. 28 to June 9 in the MIT Museum Compton Gallery. The exhibit, created by visiting architect and urban designer Tali Hatuka, celebrates the 75th anniversary of MIT’s Department of Urban Studies and Planning. Hatuka’s study of urban protests

Bethel High School is a rural school in the tiny landlocked nation of Lesotho, which was once part of South Africa. The school draws students from many surrounding villages, and they live in dormitories during the school year. Though the winter temperatures often drop well below freezing, students in the dormitories only rarely have access to hot water, and the only power in the school comes from a diesel generator, which runs for about four hours a day to power a small computer lab, thanks to diesel fuel provided by the state. The girls’ dorm, however, now has an extra amenity, thanks to work that some MIT students carried out during an 11-month stay last year. Amy Mueller and Matt Orosz, both graduate students in the Department of Civil and Environmental Engineering, designed and installed a concentrating solar array that provides the girls with plenty of hot water. The system was built last year at MIT’s D-Lab, with a lot of help from the D-Lab students. After initial testing here, just getting the components out to the remote site was quite an effort: the roadless community can only be reached by crossing a wide river on small boats, Mueller explains. Nearby, in the tiny village of Ha Teboho, another concentrating solar heater that Orosz and Mueller installed near the communal village well also provides hot water on demand. “We can easily boil lots

includes a lexicon of their different shapes—they occur in circular, grid and concentric forms—and a code for identifying key moments during protests when the outcome turns to violence. In addition, the voices and faces of people engaged in protest bring the process alive for viewers: A sound installation from various events plays individual and crowd voices in public space; a video screen projects messages, slogans and banners from protests around the world and still photographs capture

of water even during freezing weather,” Mueller says. But that’s just the beginning of their ambitious project. The two students, along with others at MIT and local co-workers in Lesotho, have formed an organization called Solar Turbine Group International. Their original plan was for the systems to provide electrical power using Rankine-cycle heatpowered engines, with hot water just an extra bonus. But in their work in the field they encountered numerous mechanical problems with the engine, and they decided to return to MIT to work out the bugs under more-controlled laboratory conditions. “The arrays performed satisfactorily, but the engines did not,” says Orosz. To fix the problems, “we figured we could make headway faster in this environment than over there.” In a return visit to Lesotho this summer, they plan to add a more robust version of the generator to the large troughshaped mirror systems, enabling them to produce enough power to recharge cell phones and batteries. The initial systems are prototypes, designed to be relatively easy to build from inexpensive materials. The engine system, which works essentially like an air conditioner in reverse, is built largely from off-the-shelf car parts that are readily available near the site and can easily be repaired by local mechanics.

singular, intimate moments in a protesting crowd. The Marie Curie Research Fellow in urban studies and planning, Hatuka received the PhD from Technion, the Israel Institute of Technology. Her research awards include the European Community Marie Curie Fellowship (2005-2008) and a Fulbright Postdoctoral Fellowship (2004-2005). The Compton Gallery is free and open daily 10:00 a.m. to 5:00 p.m.

After a bit more experience with actually setting up and operating the systems in the villages, the Solar Turbine Group’s plan is for local workers who have been collaborating on the project to take over manufacturing and launch a locally based business to produce the units for installation throughout the country. “We already built a machine shop there and hired local technicians and engineers,” Orosz says. “We’ve set up the seed of a company” that hopefully will become self-sustaining, he says, providing a useful product and generating local income. The systems are designed to be competitive with existing solar photovoltaic systems or diesel generators for producing power, and provide the added bonus of hot water. Orosz hopes the systems will ultimately cost 10 percent to 15 percent less than the other systems for power alone. “If the price is even in the ballpark of photovoltaics, we’ve won,” says Mueller, “because you get lots of hot water as well.” In the World is a new column that explores the ways people from MIT are using technology—from the appropriately simple to the cutting edge—to help meet the needs of local people in places around the planet. If you know of a good example and would like the News Office to write about it, please e-mail dlc1@mit.edu.

Villagers in Ha Teboho, in the southern African nation of Lesotho, gather to learn about a new concentrating solar generator and hot water system installed by MIT students.