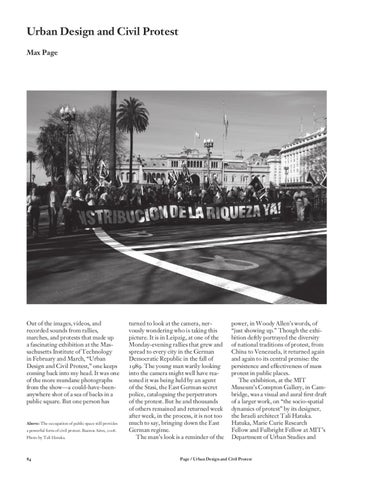 Out of the images, videos, and recorded sounds from rallies, marches, and protests that made up a fascinating exhibition at the Massachusetts Institute of Technology in February and March, “Urban Design and Civil Protest,” one keeps coming back into my head. It was one of the more mundane photographs from the show—a could-have-beenanywhere shot of a sea of backs in a public square. But one person has

Above: The occupation of public space still provides a powerful form of civil protest. Buenos Aires, 2006. Photo by Tali Hatuka.

turned to look at the camera, nervously wondering who is taking this picture. It is in Leipzig, at one of the Monday-evening rallies that grew and spread to every city in the German Democratic Republic in the fall of 1989. The young man warily looking into the camera might well have reasoned it was being held by an agent of the Stasi, the East German secret police, cataloguing the perpetrators of the protest. But he and thousands of others remained and returned week after week, in the process, it is not too much to say, bringing down the East German regime. The man’s look is a reminder of the

power, in Woody Allen’s words, of “just showing up.” Though the exhibition deftly portrayed the diversity of national traditions of protest, from China to Venezuela, it returned again and again to its central premise: the persistence and effectiveness of mass protest in public places. The exhibition, at the MIT Museum’s Compton Gallery, in Cambridge, was a visual and aural first draft of a larger work, on “the socio-spatial dynamics of protest” by its designer, the Israeli architect Tali Hatuka. Hatuka, Marie Curie Research Fellow and Fulbright Fellow at MIT’s Department of Urban Studies and

Planning, has traveled the world documenting the relationship between urban design and civil protest. The exhibition presented preliminary findings from this research, and had the refreshing feel of a work in progress, with tentative ideas offered to visitors, not finished conclusions. The exhibition had three components. Its centerpiece was a series of case-study models—Resurrection City, on the Mall, in Washington, D.C., in 1968, Istanbul in 1977, Leipzig and Beijing in 1989, Tel Aviv in 1995, Caracas in 2002, Buenos Aires in 2006, London in 2007, and several others—each showing the venue or route of protest and key architectural elements that defined it. The models sat atop rolling pedestals, which also contained pull-out drawers offering further glimpses and documentation of each event. Two black-box rooms were carved out of the exhibition space, one showing video clips of different types of protest and the other—by far the more powerful—playing sound recordings from protests. In this latter room, visitors came closest to being connected to a protest, with calls for “Out of Iraq!” a mass rendition of “All we are saying is give peace a chance,” and, in the case of one protest, the sounds of gunfire. Ringing the exhibition space were graphic interpretations that began to develop a visual vocabulary for understanding the interaction of political protest and urban space. For example, to analyze the Leipzig protest of October 9, 1989, Hatuka used a Nollilike map to mark in white the open space of the protest site, the Augustus Platz. She then inverted the map, to show the physical boundaries of the protest in white. In each case she further noted the dimensions of the protest site and provided a sectional view of it. To these she added the

form of protest (e.g., a march or a rally with speakers), its voice (the means of expression), and, finally, its scale (i.e., whether it was a local or national protest and whether it was a one-off or recurrent event). The goal of the exhibition and Hatuka’s larger project is to understand what she calls “spatial choreography”: “an intricate juxtaposition between people—through voice and appropriation of space—and space itself.” Peripheral vs. Denied Space The opening reception for the exhibition was highlighted by the inaugural Ross Silberberg Memorial Lecture, sponsored by the Department of Urban Studies and Planning. The event honors a former faculty member who was known for his commitment to social justice. In its first year, the lecture was given by the University of California, Berkeley, anthropology professor James Holston, author of Insurgent Citizenship: Disjunctions of Democracy and Modernity in Brazil (Princeton University Press, 2007).

Holston complicated an already multilayered topic by suggesting that we need to look not only at protest in central civic spaces but also to where the protesters come from—the peripheries of the great metropolises of the new century. “Insurgent citizenships may utilize central civic space and even overrun the center,” he said, but “they are fundamentally manifestations of peripheries.” Holston went on to suggest that a focus on protests in the civic center may be misdirected, or at least misleading. Rather, the real protests—or insurgencies—begin “in the realm of everyday and domestic life taking shape in the remote urban peripheries around the construction of residence. It is an insurgence that begins with the struggle for rights to have a daily life in the city worthy of a citizen’s dignity.” The department head, Lawrence

Above: Protest in Leipzig, 1989. The man looking back into the camera is testimony to the power of “just showing up.” Photo courtesy of Stadtgeschichtliches Museum, Leipzig.

Vale, brought the exhibition and talk together by suggesting that “insurgent citizenship, to be effective, needs to exploit both periphery and center.” He then posed the question that Hatuka’s exhibition suggested,

though never made explicit: “How does a regime design public spaces that accommodate a rally but also serve daily life?” Shouldn’t urban designers deliberately be able to create better spaces for the exercise of democratic protest? I am not so sure. Is not the central tone of most protests an aggressive irony, a boisterous public excoriation of political hypocrisy, of the emptiness of a regime, whether it be the most closed, authoritarian police state or an open, democratic one? As the exhibition made clear, protesters choose their

sites, their routes, their rituals, and their songs to highlight the distance between a regime’s symbols and the needs and desires of the people. A protest can succeed only, I argue, if it defies the regime by occupying space usually denied it, or occupies it in a way that transforms the place’s meaning. The Mothers of Plaza de Mayo, in Argentina, chose their location—in front of the Presidential palace in Buenos Aires—to tirelessly insist on getting final justice for their disappeared sons and daughters. In response to laws preventing demonstrations, they inventively—and as a biting critique of the repressive rules gagging free speech—“walked” in a circle around the fountain at the heart of the square, wearing their signature bandanas and carrying photographs of their children. Anti-Iraq War protestors in London likewise chose Trafalgar Square precisely to challenge contemporary jingoistic attitudes by tying them to the jingoism of the past, embodied in the column of Lord Nelson at the center of the square, named after the battle where he gained fame in 1805. The tension between the architecture of the regime and the call of the movement is the generating energy of the event. In a way, urban design and civil protest have to be at odds with one another.

Choosing a site filled with irony is only one element of protest, however. In my view, one of the central experiences of a mass protest is precisely to be part of the “mass”: to find oneself in a space that is expressly out of scale with the individual, and to find that thousands, together, have filled it. In the March for Women’s Lives on the Washington Mall in 2004, that vast, agoraphobia-inducing swath of grass and monuments was as packed as a New York City subway car. The space had been “appropriated,” to use Hatuka’s term. I suggest that it had been conquered, at least for a day—and, in the minds of the participants, forever. Likewise, the Lincoln Memorial and its reflecting pool were not designed for the civil rights demonstration of 1963. But, surely, we cannot now imagine them without envisioning the scene there when Martin Luther King, Jr., gave his “I Have a Dream” speech. That the image of a protest has supplanted the image of a monument designed in part to reunite the white North and the white South in the 1920s is in and of itself a sign of the victory of the civil rights movement. Finally, the element that remains constant over virtually all of these protests is this: the feeling of being surrounded by hundreds of thousands

of other people who share beliefs. Most people who would participate in political protest feel themselves in the minority, besieged by forces beyond their control. Activists often suffer alone, or in small cells of likeminded sufferers. A massive rally is supremely uplifting for the protestors themselves and the movement they represent, reminding them of a simple point: you are not alone. Michael Walzer’s powerful book Exodus and Revolution (New York: Basic Books, 1985) ends with his summation of the power of the Exodus story in Western culture. The

message of the enslaved people who rise up and defeat an invincible power and head toward the Promised Land comes down to this: “The way to the land is through the wilderness.” There is no way to get from here to there except by joining together and marching.

Above: Marchers in London, 2007. Photo by Tali Hatuka.