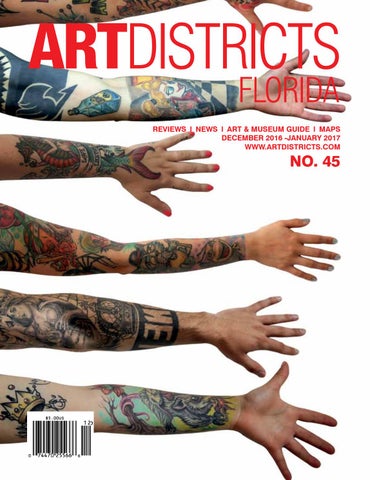 Sara Roitman is an Israeli-born artist, resident in Ecuador who over the past few decades has developed a prolific body of work that displays her means of interacting with her environment, both social and natural. Her work distinguishes itself because of the way she identifies the stimuli in the world that surrounds her; she interprets them and returns her vision about them in the form of art. Her works constitute visual metaphors through which Roitman voices her opinion about the themes that affect today’s world 24  ARTDISTRICTS l www.artdistricts.com

and that cover the relationships among human beings, the relationship of man with nature, and also her stance with respect to politics, the economy and the mechanisms that govern art and culture. Over the course of this year, Roitman has worked on the piece entitled Hablemos del dolor (Let us speak about the pain) in collaboration with the curator Hernán Pacurucu. The work is structured in 12 artistic productions, one for each month, starting in January 2016 and ending in January 2017. The piece is developed in real time, and each project is

realized in the period of precisely one month, without prior planning. “The idea was for me to leave my comfort zone and generate states of crisis upon creating,” Roitman says. “I then conceived the process of ‘producing art’ as a marathon race in which I have to work in a certain way and with a certain organization in order to be able to create one piece per month. It was essential to work with a curator, because I needed a counterpart to question me, to provoke me.” The project seeks precisely to break with the formulae that the institution of art and the traditional exhibition apparatus try to impose on artists, thus moving them away from the risk of confronting chance, originality, of proposing the difference. For this reason, for the exhibition of these 12 projects, Roitman sought unconventional spaces and museographic resources that break with the rules of exhibiting works of art imposed by museums and galleries throughout history. If we analyze Roitman’s creative career, we find works that stop clinging to the security represented by obtaining the final artistic object, the highest expression of the creative process, in order to penetrate into the uncertain territory of the unpredictable and of the direct creation of the form. Her work inserts itself into the tendencies to which current art is directed, a scenario in which artists devote themselves more and more frequently to exploring the complexity of the process of making art, temporality, interdependence and the processes of self-organization; addressing those themes with scientific premises that turn their works into experiments more than into controllable systems. Her strategy recalls that enunciated 26  ARTDISTRICTS l www.artdistricts.com

by Nicolás Bourriad in Postproduction (2002), the idea of the artist seen as a DJ, or a programmer of contents, whose function is to identify cultural objects and symbols that he will later insert and repurpose in other different contexts.1 It is not redundant to say that contact and experience with pain is the guiding thread among the 10 projects that Roitman has produced to date as part of Hablemos del dolor. The very act of forcing herself to conceptualize, produce and display one work of art per month is a painful exercise, which alludes to that veiled exigency that society imposes; the same one that demands that we be perfect, that we comply fully with norms, plans and schedules. This is precisely what the artist reminds us of in the creative exercise of producing and displaying each piece. To describe each of the works in this project would make this reflection too long; thus, I will focus on some of the pieces in this series that have appeared to me to be more interesting not only due to the final result, but also because of the peculiarities involved in the creative process itself. One case to highlight is the piece from February, Presente Perfecto. After suffering the flooding of her studio, which resulted in the loss of a number of works and materials, Roitman found a pair of glasses run over by a car in a parking lot. She rescued what was left of the object and documented what remained of it at the location, dedicating an exhibition to the presentation of the object and documentation of the creative process. To avail yourself of an object is by necessity to interpret it. The Duchampian gesture of exhibiting an object made by others displaces the situation of the creative

process placing the emphasis on the look directed by the artist toward the object in question to the detriment of any manual skill. In this manner, the act of choosing is enough to set up the artistic operation, which is as valid as the traditional act of creating a painting or carving a sculpture. Giving an object a “new idea” is already a production. The act of inserting an object into a new scenario, of considering it as a character within a story, is also creating. Another interesting piece within the project is the work from the month of July, Tintattoo. It consisted of the production of a book of photographs that assembles the documentation that Roitman gathered of the bodies of numerous tattooed individuals, like a contemporary X-ray of that ink cult that goes back millennia. “It is a matter of exploring the pain associated with having an image or emblem tattooed on your skin, a pain that on occasion becomes an addiction, and the person gets one tattoo after another; he then creates another design to connect the tattoos to each other, and so on. I also gathered as part of the project the stories associated with each tattoo. In this first part of the process I only included in the

book images of the tattoos, as a gesture to showcase the body as an expression par excellence of the idea of ‘identity,’ but I have as working material all of that file of interviews and testimonies that I will surely use in some future piece.” This fascination with the body and the infinite semantic associations that derive from it has been manifested in other works of the artist, as is the case with the series Territorios, to be exhibited during Miami Art Week. Roitman will also exhibit in the first week of December during Miami Art Week at Art Concept Miami 2016 fair pieces from the work Tintattoo, as well as recent works such as La Mosca. The latter consists of an enormous neon green sculpture of a fly. “With a critical eye, I chose the fly as a protagonist. The piece carries implicit elements that question the current government of Ecuador, the color green being associated with the demagogic discourse of the party in power. On the other hand, the fly is always an annoying element that disturbs. Furthermore, their larvae are only reproduced in places where there is decomposition. It is a critical look at the political and social situation of the country in which I live.” december 2016 - january 2017  27

As previously mentioned, looking with fresh eyes and recontextualizing objects and/or symbols traditionally associated with a function or an idea is an essential aspect of Roitman’s artistic practice. Inserting a predetermined object with a new connotation into a story is a creative exercise that this artist exploits often. Clear examples of this strategy are her pieces from the series Re, begun around 2000. In this series, the artist plays with the prefix “re-“ to reinforce the action of rethinking diverse objects and materials and recontextualizing them in new scenarios and meanings. Within the pieces that make up this series, I find ReFundar especially interesting. The piece is comprised of the map of Ecuador, made from fragments of plastic bags, which in that country are called “fundas.” The surface, which alludes to the geographic area of the country, is divided in two and carries the colors of the national flag; the structures are supported on flimsy wooden legs. The piece in its entirety is a potent metaphor for the political and social crisis of that nation, where the interests of different factions have ideologically divided the territory. ReFundar is a call to rethink the concept of nation and to analyze the solutions that sustain political programs. It is also a questioning of the demagogic symbols that the government in power embraces, falsely advocating for the protection of the planet but not going beyond simple slogans. This interest in ecology is

manifested in various moments of her career, as is the case with works like Re-Vitalizar. Espacio Verde, Re-Mix, Re-Flexionar, Una cama para soñar and others. Through her work, Roitman questions features traditionally associated with artistic production, such as originality, permanence and materiality of the work of art. Here, the work is an entity that reveals its process of creation, an uninterrupted process that is nourished by the participation of the viewer. In this manner, the artist functions as a producer of knowledge, a provocateur, whose actions invite reflection and the generation of new ideas and processes.

Raisa Clavijo is a curator, historian and art critic. She is the founder and editor-in-chief of the magazines ARTPULSE and ARTDISTRICTS.

Sara Roitman is an Israeli-born artist, resident in Ecuador who over the past few decades has developed a prolific body of work that displays her means of interacting with her environment, both social and natural. Her work distinguishes itself because of the way she identifies the stimuli in the world that surrounds her; she interprets them and returns her vision about them in the form of art. Her works constitute visual metaphors through which Roitman voices her opinion about the themes that affect today’s world and that cover the relationships among human beings, the relationship of man with nature, and also her stance with respect to politics, the economy and the mechanisms that govern art and culture.