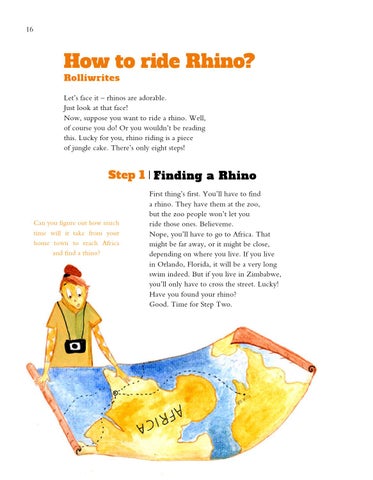 How to ride Rhino? Rolliwrites

Let’s face it – rhinos are adorable. Just look at that face! Now, suppose you want to ride a rhino. Well, of course you do! Or you wouldn’t be reading this. Lucky for you, rhino riding is a piece of jungle cake. There’s only eight steps!

Can you figure out how much time will it take from your home town to reach Africa and find a rhino?

First thing’s first. You’ll have to find a rhino. They have them at the zoo, but the zoo people won’t let you ride those ones. Believeme. Nope, you’ll have to go to Africa. That might be far away, or it might be close, depending on where you live. If you live in Orlando, Florida, it will be a very long swim indeed. But if you live in Zimbabwe, you’ll only have to cross the street. Lucky! Have you found your rhino? Good. Time for Step Two. 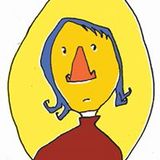 As part of 'Untextbook' project, I designed a textbook for Grade V schoolchildren, with a focus on enhanced imagery and experimental layouts...

As part of 'Untextbook' project, I designed a textbook for Grade V schoolchildren, with a focus on enhanced imagery and experimental layouts...