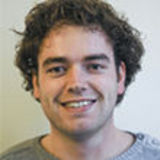 Roeland Meek was born 04 September 1986 and grew up in the little village Altforst, Gelderland, the Netherlands. When he was 16 he moved to Nijmegen to study traditional landscaping. As a qualified landscaper he continued his education at the, University of Applied Sciences, Van Hall Larenstein part of Wageningen UR, where he graduated Cum Lade in 2012 in the department landscape architecture. Roeland Meek worked in 2009 as a trainee at H+N+S Landscapearchitects in Amersfoort. In 2011 he started with ten other landscapdesigners the design group Happyland Collective, which still flourishes and exploits a common studio and project space in Arnhem. Besides, he works as independent garden designer for individuals. In 2012 he starded as instructor at the University of Applied Sciences, Van Hall Larenstein.