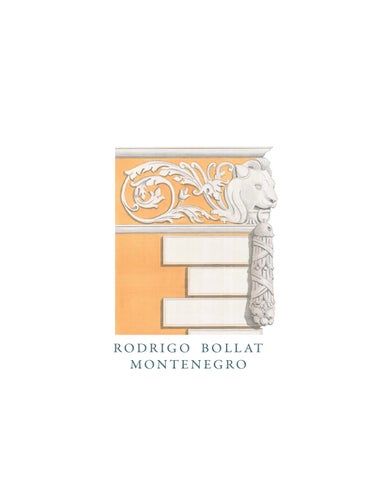 As part of an effort to redo the “Roma Interrotta” project from 1978, this project uses Nolli’s Rome as a starting point to generate new urban proposals. The general strategy was to extend the18th Century urban fabric of Rome along the extents of Nolli’s ninth plate. The San Giovanni in Laterano master plan consists of enclosing the public spaces surrounding it, allowing a sequence of piazze that interconnect the different parts of the historical complex.

Above: The original Nolli Plate of 1748 Below: Proposed Master Plan

Above: Proposal for the San Giovanni in Laterano Complex Below: Proposed facades for main entry sequence Bottom: Network of streets and piazze

Presented in the form of an analytique, the intent of the project was to propose an alternative interior design to the existing chapel. The design features the eighteenth-century monument to the Ludovisi Pope, Gregory XV, as well as the integration of the sculptures of the four virtues, crowned by a coffered ceiling representing the rays of the Holy Spirit.

After a week-long charrette with the community of Lafayette, the Notre Dame Urban Design Studio designed a series of proposals for different sites throughout the city. The following are selected images from one of the sites: Saint John Street in Downtown Lafayette. The main goals were to provide a variety of housing types (including flats, townhouses, courtyard apartments and mixed-use), in order to increase density in the forgotten downtown.

Above: Perspective of the proposed Babin Square Below: Existing versus proposed plans Opposite: Aerial view (looking southwest)

Morristown, NJ Published in the Notre Dame School of Architecture`s 2011-2012 Acroterion This monasteryâ&#x20AC;&#x2122;s very simple, yet complex, orthogonal layout reflects the hypothetical requirements of a group of radically traditional Benedictine monks. Evoking the sober classical language of Spanish Renaissance, the hierarchy of the disposition of the church and cloisters is reflected in the massing and faĂ§ades. The main cloister is flanked by the two taller parts of the complex (which house the cells), framing the towering pinnacles of the Chapter House and leading to the refectory and the scriptorium. There is a secondary cloister which serves the sacristy and prepares monks as they enter the church for prayer, as well as a guest cloister. The basic building material is brick, except in the more ornate parts (church) with slate roofs.

Above: South Facade Below: Aerial view of the Monastery

Rome, Italy 2013 Acanthus Award Winner (ICAA Chicago) In a hypothetical situation, Flanders separates from Wallonia, requesting an embassy in Rome that follows the typology of a Roman palazzo. Close to the Flemish Church on Via del Sudario, the site neighbors the imposing church of Sant’Andrea della Valle and faces one of central Rome’s main arteries: Corso Vittorio Emanuele II. Its plan is organized around a cortile which allows light and ventilation in this tight site. Services occupy the narrow sides while the most prominent rooms face the north and south end of the building. The lion–symbol of the Flemish–is embedded in the architecture as the ornamental piece that gives it its character.

Above: Side Facade Below: Longitudinal Section

Above: Facade Proposal for Santo Spirito, Florence Below: Piazza Sequence to the Pantheon, Rome

Presented in the form of an analytique, this aedicule is proposed to stand in the south facade of the Lincoln Park Cultural Center. It was designed to hold a small replica of the Lincoln Memorial Statue in Washington, D.C. The inverted wreaths are taken from the Monument of Thrasyllus, depicting victory of a fallen leader.

Directly opposite to the Palatine Hill, this renaissance gardenâ&#x20AC;&#x2122;s purpose is to display sculptures from classical antiquity. The required program included terraces, parterres, use of water, mazes, a temple, a gate, a circus, and a secret garden.

PORTS SHOULD BE CITIES AGAIN Located in Guatemalaâ&#x20AC;&#x2122;s Atlantic Coast, this new metropolis aims to integrate the port district with the rest of the city, by linking trade, living and manufacturing with a network made up of urban quarters, boroughs, and neighborhoods. With the aim of making the port a city again, traditional urban principles and the vernacular Laws of the Indies town planning are utilized to create a more resilient model for the city. Architectural and Urban Design projects done at the University of Notre Dame.

Architectural and Urban Design projects done at the University of Notre Dame.