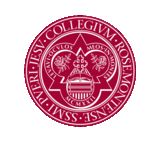 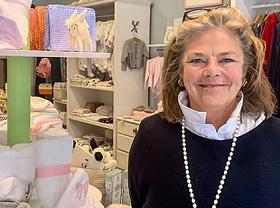 The Rosemont athletic community is saddened to learn that Rosemont's former longtime Director of Athletics, Ann Donaldson, has passed away.

Ann died Thursday, Feb. 18, 2021, at age 90. Rosemont athletics was lucky to have known Ann and she has left a lasting legacy at Rosemont College.

Ann was hired by Rosemont College as a Physical Education teacher and coach. Over the years, she coached Tennis and Basketball. She was named Coach of the Year several times and served as the Athletic Director. Ann retired in 1994 after 43 years with the college.

She went on to Temple. At Temple University, , where she received her Bachelor's and Master's Degrees, she was a three-sport athlete, playing field hockey, basketball, and softball. Ann was a loyal Phillies fan, through thick and thin, and had season tickets for 45 years. Ann was an accomplished athlete who skied worldwide and was the doubles Tennis champion at Germantown Cricket Club for 15 years. In retirement, Ann played Golf at Sandy Run three times a week until she was 88 years old. She played with the ladies' golf group at Pinecrest Country Club, where she had a Hole-in-One and bowled with the same group in the off-season. Ann was a graduate of Ambler High School, class of 1947, where she was a member of the Honor Society and voted Most Athletic in her class.

Ann Donaldson was the lady in the gym. Our coach, our leader, a kind spirit with just enough moxy to give you tough love when you needed it, a laugh when you least expected it and a lesson when you thought you knew it all. She took time to introduce coaches and let you know that she had hand picked them to lead us to victory. I played four sports a year at Rosemont for Mrs. D. That's how I always looked at it. Especially since she was the one that elevated the great sport of badminton to its rightful place in athletics. As a graduate of the class of '92 when badminton took it's proper position in the Barcelona games at the Olympics, I just knew Mrs. D was onto something huge. As the badminton coach, she literally taught me the game all the while dropping little gems about practice makes perfect, honing your skills, respecting the game, knowing your opponents game as a strategy and the importance of staying in the game because it is not over until the whistle blows.

What a powerful yet delicate dance she led us in; all the visual leadership traits in humility, confidence, and service to others rolled into one woman. She was a role model, a constant, and a friend.

Dr. Conwell assisting a student in the former Conwell Language Lab, which she and her mother generously gifted to the College.

Marilyn J. Conwell, PhD, Professor Emerita, passed away peacefully on Jan. 13 at the age of 87. Marilyn was a beloved member of the Rosemont community for 50 years.

Born in 1933 in the East Falls section of Philadelphia, Marilyn graduated from Philadelphia Girls High School and continued her education at the University of Pennsylvania, earning her bachelors, masters, and doctorate degrees before becoming a professor of linguistics at Pennsylvania State University.

Conwell designed, installed, and directed the Conwell Learning Center at Rosemont and was instrumental in establishing the only full-credit American Sign Language (ASL) course in the Philadelphia area. She prepared and presented an ASL workshop at the Northeast Conference in New York City, a first that a foreign language organization sponsored an ASL program.

In 1980, during a sabbatical, she studied computer programming and wrote programs for Rosemont Foreign Language students. Conwell's doctoral thesis on French Louisiana Dialect was internationally published and remains the only fully published study on the dialect.

It was a bittersweet gathering of Rosemont College alumni, faculty, and other community members at St. Denis Church in January, as we celebrated the life of Dr. Marilyn Conwell, Professor Emerita at the College.

Overwhelming sadness possessed me learning of her passing on Jan. 13. Immediate images come to mind when I think of Dr. Conwell: a strong, smiling Force of Language, and her laugh as she walked across campus. Seeing her swirling skirt, the high-heeled shoes, the beret (often red), the red lipstick — in the minds of the students of the 1970s, Dr. Conwell was a walking homage to the 1940s. A class act.

Never her student, I learned about her vicariously. A unique act, my classmates said in describing her. She could have unraveled the Tower of Babel. Dr. Conwell perpetually captivated her students; her love for them was as profound as her love of the spoken word. So much so that she employed a legendary tactic that today’s students might deem archaic: She scheduled classes during TV soap opera hours. Her students had no choice but to focus on the drama of syntax. They knew of her scheme and made the sacrifice. No student of hers would fall prey to such foolery, if she could help it.

It’s amazing to think that such memories could be held about a teacher whose class I never sat in. But that’s also the beauty of Dr. Conwell’s legacy to Rosemont College. She remains a guiding hand, who continues to teach us with the eternal gift of her devotion and of her dedication.

Dr. Conwell joins her deceased, beloved professors who live forever in the classrooms of our minds of our beloved school. We remain so fortunate as recipients of her brilliance and for the brilliance of her colleagues that shines within us always. Well done, Faithful Servant, well done! Dr. Marilyn Conwell, may you rest in the Lord’s peace and in our gratitude.

Kuhn was born in West Philadelphia, June 2, 1935, to John G. II and Helen (Wright) Kuhn. After graduating from West Catholic High School in 1953, he earned his BA in English from St. Joseph's College (1957) and his MA in English from Purdue University (1959), where he also met the love of his life, Janice Rose McFadden, a math student there. The two married in 1960 and lived in Las Cruces, NM, where he taught at New Mexico State University before returning to the Philadelphia area to complete his PhD at the University of Pennsylvania and begin a 30-year teaching career at Rosemont College. He taught English, writing, and poetry and developed the Rosemont theater program, directing an annual student theater production before retiring in 2002, becoming Professor Emeritus. He was a dedicated writer and throughout his career published poems, plays, and scholarly papers on Greek theater, Walt Whitman, and Eugene O'Neill. Everything - his family, nature, politics, world crises - became fodder for his writing. In particular, his year-long sabbatical in Montalcino, Italy, inspired a volume of poetry, Some Stolen Pavingstones.

Kuhn home office, overlooking the Pennock Woods in Lansdowne, PA, served as his writing haven. Most days, when not at Rosemont, he would be found working at his old typewriter and smoking his pipe in his office, a den too small to move about and overloaded with hundreds of books he had collected (and read) and sorted into wooden boxes alongside scores of playbills, notes, clipped articles and class outlines - all stuffed into its proper book. Kuhn loved teaching and for 37 years relished introducing students to the joys and mysteries of literature, poetry, and theater. He was highly regarded by colleagues and by students who, decades later, spoke lovingly of his influence and inspiration.

How does one write about a writer? This quandary would have fascinated our friend, Dr. John G. Kuhn III. I wonder will he begin this task by uncapping one of the myriad red pens that nestled so snuggly in the pocket of his tweed blazer? Once I’ve submitted my work, will he take points off for not citing my sources? Will my thesis be evident and effective? Or, will he tell me to dig deeper? . . . because “You can do better, Tara.”

Once tasked with this project, I made haste to the basement as I knew exactly where my Rosemont files were located. I had saved all of my English papers on the off chance that someone would ask me for “A Critical Analysis of Oedipus Rex.” Before I delved into that dilapidated, dusty box, I was quite certain that John Kuhn gave me an A in every course over our four years together at Rosemont. Well, I was wrong--(unreliable narrator)! Many of my papers were a minefield of red ink, cross outs and suggestions. On one paper, I actually received an A/D+. How is that even possible? Is it an A, John? Or a D+? And if it’s a D+, I may need to choose another advisor. As a poet, a writer and a director, John Kuhn loved the written word. He embraced it, he labored over it, he loved to talk about word choice. As the longtime director of Jest and Gesture Theater, it was, “Call me John.” Well, that was a word choice. It meant: I am your friend and I care about you. John Kuhn cared enough to push me to be better. To not be satisfied (split infinitive and sentence fragment) with my first draft. He loved the theater and encouraged his students to trust and to take risks. Through his rich life, John impacted scores of thespians with his knowledge, his wit and his care. He saw his students as the best version of themselves and pushed them to take risks to achieve this.

Here’s what I learned: The difference between its and it’s. Finally! I wrote it on the inside of my folder and think about that once or twice each day. And I thank him because not a lot of people know that one. I promise. Look for that error in your daily life and you will find it. A good writer will “Show it, and not say it.” Because if you show it correctly, your reader will understand. Here was his example: I know my son loves me when he wants to introduce me to his friends. He doesn’t have to say it, he doesn’t have to hit me over the head with it. I know it’s there because of his gesture. (Notice the correct use of it’s.)

And I know that scores of thespians (remember them from paragraph 3?) knew it too. He invited them back to Rosemont to be a part of J&G long after graduation. He kept them as a part of Rosemont Theater as audience, as judges. An ever-evolving group of dedicated and loyal players who kept coming back because of the caring world that John created with his co-director, Meg Walters. All of the papers that I wrote for John were lovingly critiqued. Perhaps John Kuhn put more effort into the critique than I actually put into writing some of those early papers. Probably, yes. As I read over his comments, I realize that he was showing me his care and friendship even if I didn’t always like the grade. And that minefield of cross outs were always signed “Love, John.”

This story is from:
Rosemont Magazine, Spring 2021
by Rosemont College