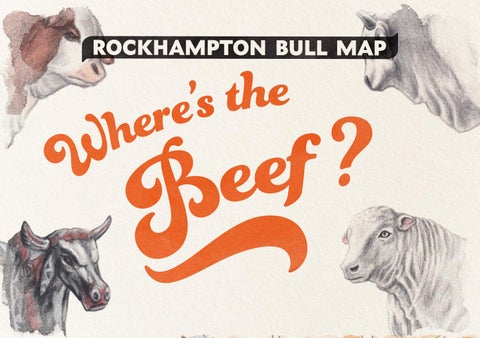 Follow the below link or use the QR code to find the bulls’ exact locations. Jump in the car and discover Rockhampton’s wonderful world of bull statues – pick up a bit of bull breed 101 and have some fun with Rocky’s beef industry icons. Whether you are seeking an insight into the city’s cultural identity, looking to learn more about the history of the region’s dominant pastoral industry or just coasting for some kitsch kookiness, Where’s the Beef? is a works burger upsized with special sauce!

We estimate it takes 40 minutes to visit each of Rockhampton’s beefy bull statues in your car. Remember to add on time for a visit to Rockhampton Art Gallery. It’s a blue ribbon event with more than a few modern masterpieces to enjoy. Illustrations and map by local artist Marilyn Williamson. Rockhampton Art Gallery open daily 10am - 4pm rockhamptonartgallery.com.au

The Regional Arts Development Fund is a Queensland Government through Arts Queensland and Rockhampton Regional Council partnership to support local arts and culture.

Born in the USA, this big boy is a mighty Brahman. They are the greys and reds that dominate northern Australia and are easily identifiable by their big hump, droopy ears, dangly dewlap and a bellow that would better any baritone. Originating in the early 1900s, the Brahman – or ‘yaks’– were born of the progeny of four Indian Zebu breeds (Bos indicus) with an infusion of British-bred cattle (Bos taurus). The Australian Brahman arrived in earnest in 1933 when a syndicate of innovative Queensland cattlemen imported a significant number and kicked off a revolutionary approach to beef breeding.

Vast tracts of previously unproductive land were pioneered and developed into profitable beef enterprises through investment in a breed which could adapt to the harsh tropical climate and environmental conditions. Erected in 2000 to welcome Rockhampton’s visitors from the south, this beastie is the largest of all the bull statues. Famously stranded by the flood waters of 2011, this statue often gets a bum steer because of its prominent rear. YEPPEN ROUNDABOUT | BRUCE HIGHWAY

The ‘gerts’ as they are often called, are both a familiar face and a firm favourite. Hailing from southern Texas, the Santa Gertrudis breed was born in 1910 when breeders at King Ranch began crossing Shorthorns with Brahmans. A decade later a bull calf was born and because of his playful nature was named Monkey. He was of gentle disposition, deep beefy red in colour and weighed 498kg at 12 months of age. King Ranch Australia introduced the breed in 1952 and it soon spread

throughout Australia, contributing significantly to beef production in all areas. In taking a detailed inspection of the statue you may note it was unveiled on 18 September 1985; you may also note the breed’s unlaboured gait (an inherent trait of Bos indicus which enables them to easily cope with travelling long grazing distances); and you will note that its testicles are tethered in steel to prevent any unauthorised surgery. FRANK FORDE PARK | BRUCE HIGHWAY

Ferrari, Lamborghini, Alfa Romeo, Romagnola – Italian designed and built big, they come with big wraps and a big reputation. They are the gentle giants of the beef world and were originally developed in the Romagna district of north-east Italy. For centuries the Romagnola was primarily used as a draught animal assisting in tilling the plains. This living tractor heritage led the breed to evolve towards a progressively more muscular type with bulls averaging 158cm in height and weighing in at 1090kg plus.

While a Romagnola bull might be able to get about in an ‘Italians do it better’ t-shirt, sadly Rocky’s Romagnola statue has not always matched such machismo. When it was first unveiled on 13 April 1997 to commemorate the Italian Beef Cattle World Congress, held in conjunction with Beef ’97, it was unkindly dubbed the ‘polar bear’ because of its ‘kicked-in kerosene tin’ head. Despite extensive remodelling, it may never be classified as a stud muffin in statue circles but fortunately for the Romagnola, the real deal has a lot to offer. O’SHANESY PARK | BRUCE HIGHWAY

With a snazzy red and white coat, and developed right here in Central Queensland, the Braford is now in favour and flavour around the world. Easy to polish (fatten), always sparkly when cleaned, and on top of their mainstay in the meat biz, they also cut a damn fine rug. The Braford breed originated at ‘Edengarry’ north of Rockhampton in 1946 when the Rea Brothers introduced Brahman bulls to their Hereford breeders in a bid to combat the ravages of drought, cattle ticks and eye cancer.

The development of the breed is a true Australian success story and through determination and dedication the modern Braford has been bred to withstand the harshest seasons while remaining fertile and functional. The Braford is one of the first two members of Rockhampton’s bull statue herd and was mustered in amidst great excitement on 16 November 1978. Constructed from concrete set over a wire mesh frame the statue was built by Maroochydore ‘Big Thing’ sculptor, Hugh Anderson. GLADSTONE ROAD | BRUCE HIGHWAY

Made in Queensland, the Droughtmaster is the end product of the perseverance of the pioneering spirit and a testament to industry and innovation. Through careful culling and selection of progeny from the crossing of Bos indicus and Bos taurus genetics, the Droughtmaster breed evolved. Creating a new breed was not only a tremendous challenge, it also severely ‘bucked the system’ of conventional cattle breeding in what was a very traditional and conservative industry. The ‘droughtie’ is a common sight now and likes to rub shoulders (and other parts) with their Bos indicus cousins, the Brahman and the Santa Gertrudis, to make better steaks.

Commissioned by CQUniversity as recognition of the innovation which brought about ‘Australia’s own cattle breed’, the statue at the airport was installed to mark Beef ‘94 and to welcome visitors flying in to the city. Designed and built by Manicka Dhanasekar, the University’s then Associate Professor of Structural Engineering, the statue came with steel reinforcement offering inbuilt protection against castration. ENTRANCE | ROCKHAMPTON AIRPORT

The latest sire to enter the ring is Under the hammer, a sculpture by artist Daniel Clemmett. Constructed using car bonnet skins, the sculpture is one-third of the life size representation of a Brahman bull. The work was originally created for Sculpture in the Paddock, a 2011 exhibition organised by the Bangalow Show Society in northern New South Wales. Eight artists were ‘matched up’ with eight farming families to combine their knowledge and talents and create a visual interpretation that reflects life on the land.

Teamed with Brahman breeder Ron Chittick, Daniel used Ron’s profession as an auctioneer as inspiration for the piece: ‘There’s the auctioneers hammer, the artists hammer, and the metaphorical hammer that all farmers are often under at some stage with a changing climate’. Under the hammer moved in to his new home in May 2015 and now stands as sentinel to the entrance of Rockhampton Art Gallery. It is a modern interpretation of the beloved beast that has come to symbolise Rockhampton’s past, present and perhaps future. ROCKHAMPTON ART GALLERY | VICTORIA PARADE

Rocky’s second original bull statue inhabitant is the Yaamba Road Brahman on the north side of town. Like so many of the city’s notable features, the bull statues were the brainchild of the irrepressible, Rex Pilbeam. The original ‘Can Do’ Mayor, Pilbeam’s legacy is both deep and broad, from building a barrage to amassing a nationally significant civic art collection; bull statues were just another strategy in the Pilbeam arsenal for putting Rockhampton on the map.

‘I charge the citizens of Rockhampton, who have been given them absolutely free of charge, to cherish the gifts and to protect them against damage, actual or threatened, wilful or accidental,’ the Mayor said at the unveiling. It seems Pilbeam was also a visionary and accurately predicted the burden that the bull statues would all come to bear – the struggle to hold onto their balls, an indignity suffered by all of Rocky’s bulls at one time or another. YAAMBA ROAD | BRUCE HIGHWAY

Jump in the car and have some fun with Rocky's beef industry icons while learning a little about each of the different breeds.