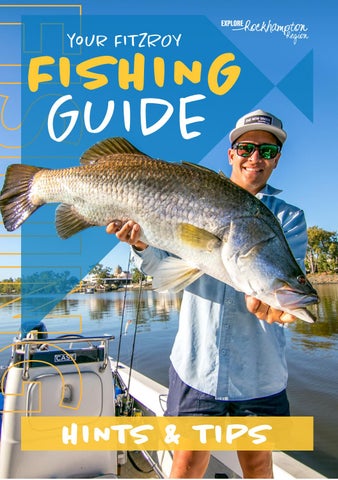 ROCKHAMPTON, QUEENSLAND Rockhampton sits on the magnificent Fitzroy, the largest river system on the eastern seaboard of Australia. The Fitzroy River catchment has an area of 156,000 square kilometres, providing prime estuary and freshwater fishing. Since the time of the dreaming, the Darumbal people of Central Queensland have known the fish with the large scales as the ‘bardda moon di’. This defines the Fitzroy River catchment as the genuine ‘home’ of the barramundi in Australia. Our region could very well have been designed by fishermen, with an extensive river, large delta and interconnecting creeks, a bay with islands and reefs, vast flood plains, billabongs and lagoons. Take a look at the amazing landscape on offer as you fly into town. This Fishing the Fitzroy guide will let you choose your own fishing adventure. Start your fishing journey in Rockhampton, where the barra lure you!

FISHING FOR ALL Rockhampton’s location on the Fitzroy River makes it ideal for fishing, no matter what age or stage you’re in. We’re also located on the Bruce Highway – all major Queensland highways lead to Rockhampton!

FISHERS: Rockhampton’s high-end hotels and done-for-you fishing charters mean you can fly into town, catch some fish and make a great weekend of it on a short time schedule.

RECREATIONAL FISHER WITH YOUR OWN BOAT: Rockhampton is less than a day’s drive from Brisbane or Townsville. With plenty of holiday houses and caravan parks, it’s perfect for a short trip and a change of scenery.

GREY NOMAD: With caravan parks along the river, Rockhampton is handy for the land-based fisher on their great adventure. If you’re travelling, Mount Morgan’s No. 7 Dam should be a stop along the way, as it’s perfect for the kayak fisher.

C ENTRAL QUEENSLANDER: If you’re from around these parts but not close enough to fish every weekend, Rockhampton offers a destination with fishing, shopping and entertainment for the whole family.

The Department of Agriculture and Fisheries regulates the size and bag limits for Barramundi and King Threadfin. Suggested sizes for catch and release as depicted on this guide is part of the Rockhampton Recreational Voluntary Code of Practice.

SEASONALITY YOU CAN FISH THE FITZROY ALL YEAR ROUND. Barramundi season is open from midday 1 February to midday 1 November each year. Generally, the warmer months are best for barra fishing, but with Rockhamptonâ&#x20AC;&#x2122;s mild winters, the barra never really stop biting. When barra season is closed, king threadfin can be found aplenty. During the colder times of the year, the king threadfin are hungry and will practically jump on a good prawn lure or live bait.

DID YOU KNOW? Saltwater barramundi have a blue or green-grey colour on their upper body, silver on the lower body, and usually have very little internal fatty tissue.

ORT FISH ALONG THEIR LENGTH (above 400mm+)

If you’re fishing the Fitzroy, check out the Rockhampton Recreational Fishing Voluntary Code of Practice (RRFVCOP). This voluntary system, endorsed by Rockhampton Regional Council, outlines community expectations of all fishers within the region. The code sets out four values: 1. Maintaining healthy fish stocks through sustainable harvest behaviours. We do this by limiting the take of barramundi and king threadfin to a maximum of two of each species per trip. 2. Proper care and handling of all fish being released to maximise survival rates. 3. Zero tolerance for illegal fishing activities. 4. Care and respect for the environments where fish live. These sustainable fishing behaviours mean that our region’s fish will continue to thrive, creating a playground that you can return to time and again. Sign up to the Code of Practice at advancerockhampton.com.au/rrfvcop.

Threadfin are na med for the shor t filaments on thei r pectoral fins. A blue threadfin ha s four of these filaments (or thre ads), and a king threadfin has five filaments. King threadfin ca n grow to 140cm long and can live to at least 10 years of age.

FISHING ADVENTURE In the Fitzroy River catchment’s 156,000 square kilometres, there are thirty-six tributaries and one of the most diverse ranges of freshwater fish in the country. On the back of the net free zone regulation, the Fitzroy River and the Fitzroy Delta are bouncing back, with an increased catch rate and an increase in trophy fish being caught, particularly barramundi and king threadfin. The Fitzroy’s fishing adventures run across two domains:

know what the locals know The Neville Hewitt Bridge (known as the ‘new bridge’) is an excellent fishing spot, around the bridges, rock bars and structures. Barramundi and king threadfin are often found in these areas. Downriver fishing spots include the Cut Through and Devil’s Elbow. The Cut Through is a great fishing area, with tree branches and logs in the water. Devil’s Elbow (the elbow bend just as you head out of the Rockhampton CBD) is the first of the deep water bends in the river and has rock piles that break the water flow as well as old gum trees in the water. This provides the perfect habitat for both threadfin salmon and barra. When fishing for barra and threadfin salmon, look for the cleanest water possible as this will give the fish the best chance of seeing your lure! The most popular baits for barra and threadfin are banana prawns which can be found in the Fitzroy River from the town reach all the way to the mouth. Cast nets from the boat are the preferred method of capture. If you are using cast nets, take extreme care as there are crocodiles in our river system. You can access Casuarina Creek via the hole in the wall, this is a gap in the rock wall just north of Thompson Point. Or you can come in from the Port Alma side, which is unique in that it runs in from both ends. Take care when using the hole in the rock wall as it is only narrow and the tide runs hard . If in doubt use the next creek along to the south which also links Casurina which is also good mud crabbing country.

The beautiful freshwater side of the Fitzroy provides anglers the opportunity to reel in barramundi, golden perch and saratoga. With access from both the north and south side of Rockhampton, this mostly sheltered area is perfect for fishing either with powered or unpowered vessels. In the dry season, freshwater lagoons offer great access to barramundi fishing.

know what the locals know Woolwash Freshwater Lagoons is accessed via Port Curtis Road and is for land-based fishing only. When Gavial Creek runs after heavy rain, barramundi actively go between the creek and lagoons from the Fitzroy River. Extreme care should be taken along the edges of the creek and lagoons, as crocodiles are regularly sighted.

Port Alma is 60km south of Rockhampton and is right on the south end of the Fitzroy Delta, a massive estuary system right in the middle of the Rockhampton region. Port Alma is the main access point for Casuarina Creek, Inkerman Creek, Raglan Creek, Connors Creek, the Narrows, the northern point of Curtis Island and Yellow Patch. Port Alma is also a setting-off point for offshore fishing, as well as a location for fly fishing.

know what the locals know Offshore access to the southern part of Keppel Bay is available for smaller vessels via the Port Alma boat ramp. In Keppel Bay, you can bottom bash for species like coral trout, sweetlip and red emperor, or troll for species like spanish mackeral, cobia and long tailed tuna. Raglan Creek adjoins Port Alma and runs between Curtis Island and the mainland. This is the creek to fish for barramundi, thanks to the mangroves and tidal habitats. Casuarina Creek is larger in size and feeds directly back into the Fitzroy River – it’s a great spot for king threadfin. Port Alma Mouth is your hotspot for blue threadfin.

The Mount Morgan No. 7 Dam is 2km from the centre of Mount Morgan, roughly 45kms southwest of Rockhampton on the Burnett Highway. The No. 7 Dam is a great spot for family fishing, with BBQs, a playground and wide-open spaces for the kids to run. The Dam has a speed restriction on boats, so it’s also a great kayak fishing option.

Reel Fishing CQ Fishing Charters have an owner-operated custom vessel with shade, offering a range of fishing experiences from targeting barra and king threadfin in the Fitzroy River system to reef and pelagic species in Keppel Bay. Call to book a fishing charter service with all the gear, food and drinks supplied.

CatchYa Boat Hire is the only boat hire company within the Rockhampton Region. CatchYa is a one stop shop where not only can you hire a boat, but also all the accessories you will need to go with it for a fun day out!

In its first year, the Frenchville Sports Club Barra Bash was an absolute hit with a number of events and great prizes. Kicking off at the start of winter proved to be a great recipe giving Rockhampton the chance to show that barra can be caught in the cooler months, showcasing Rockhampton as an all year round barra destination.

Since 2012, the Women That Fish Barra Classic (WTF) aims to empower women and build their confidence on the water, as well as providing an amazing friendly atmosphere for all to enjoy. The classic is open to ladies 18 years and over.

The Rocky Barra Bounty is iconic as far as barra events go and is the largest of its kind in Queensland. Set up as a data collecting source back in the 90’s, it has proven invaluable in the monitoring of fish stocks in the region and is has now been running for twenty years. Comprising of catch and release as well as tagging, if you are a serious barra fisho you have to be in this one! Rockhampton sits on the magnificent Fitzroy, the largest river system on the eastern seaboard of Australia. The Fitzroy River catchment has...

Rockhampton sits on the magnificent Fitzroy, the largest river system on the eastern seaboard of Australia. The Fitzroy River catchment has...