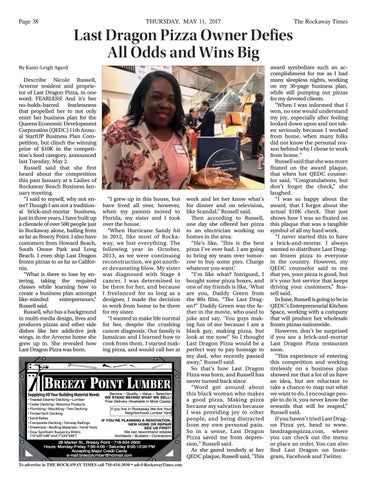 Describe Nicole Russell, Arverne resident and proprietor of Last Dragon Pizza, in one word: FEARLESS! And it’s her no-holds-barred fearlessness that propelled her to not only enter her business plan for the Queens Economic Development Corporation (QEDC) 11th Annual StartUP Business Plan Competition, but clinch the winning prize of $10K in the competition’s food category, announced last Tuesday, May 2. Russell said that she first heard about the competition this past January at a Ladies of Rockaway Beach Business January meeting. “I said to myself, why not enter? Though I am not a traditional brick-and-mortar business, just in three years, I have built up a clientele of over 500 people just in Rockaway alone, hailing from as far as Breezy Point. I also have customers from Howard Beach, South Ozone Park and Long Beach. I even ship Last Dragon frozen pizzas to as far as California. “What is there to lose by entering, taking the required classes while learning how to create a business plan amongst like-minded entrepreneurs,” Russell said. Russell, who has a background in multi-media design, lives and produces pizzas and other side dishes like her addictive jerk wings, in the Arverne home she grew up in. She revealed how Last Dragon Pizza was born.

“I grew up in this house, but have lived all over, however, when my parents moved to Florida, my sister and I took over the house. “When Hurricane Sandy hit in 2012, like most of Rockaway, we lost everything. The following year in October, 2013, as we were continuing reconstruction, we got another devastating blow. My sister was diagnosed with Stage 4 cancer. I was determined to be there for her, and because I freelanced for so long as a designer, I made the decision to work from home to be there for my sister. “I wanted to make life normal for her, despite the crushing cancer diagnosis. Our family is Jamaican and I learned how to cook from them. I started making pizza, and would call her at

To advertise in THE ROCKAWAY TIMES call 718-634-3030 ads@RockawayTimes.com

work and let her know what’s for dinner and on television, like Scandal,” Russell said. Then according to Russell, one day she offered her pizza to an electrician working on homes in the area. “He’s like, ‘This is the best pizza I’ve ever had. I am going to bring my team over tomorrow to buy some pies. Charge whatever you want.’ “I’m like what? Intrigued, I bought some pizza boxes, and one of my friends is like, ‘What are you, Daddy Green from the 80s film, “The Last Dragon?” Daddy Green was the father in the movie, who used to joke and say, ‘You guys making fun of me because I am a black guy, making pizza, but look at me now!’ So I thought Last Dragon Pizza would be a perfect way to pay homage to my dad, who recently passed away,” Russell said. So that’s how Last Dragon Pizza was born, and Russell has never turned back since. “Word got around about this black woman who makes a good pizza. Making pizza became my salvation because I was providing joy to other people, and being distracted from my own personal pain. So in a sense, Last Dragon Pizza saved me from depression,&quot; Russell said. As she gazed tenderly at her QEDC plaque, Russell said, &quot;This

award symbolizes such an accomplishment for me as I had many sleepless nights, working on my 30-page business plan, while still pumping out pizzas for my devoted clients. &quot;When I was informed that I won, no one would understand my joy, especially after feeling looked down upon and not taken seriously because I worked from home, when many folks did not know the personal reason behind why I chose to work from home.&quot; Russell said that she was more fixated on the award plaque, that when her QEDC counselor said, “Congratulations, but don’t forget the check,” she laughed. “I was so happy about the award, that I forgot about the actual $10K check. That just shows how I was so fixated on this plaque that was a tangible symbol of all my hard work. “I never started this to have a brick-and-mortar. I always wanted to distribute Last Dragon frozen pizza to everyone in the country. However, my QEDC counselor said to me that yes, your pizza is good, but it’s your hot service that keeps driving your customers,” Russell said. In June, Russell is going to be in QEDC’s Entrepreneurial Kitchen Space, working with a company that will produce her wholesale frozen pizzas nationwide. However, don’t be surprised if you see a brick-and-mortar Last Dragon Pizza restaurant soon. “This experience of entering this competition and working tirelessly on a business plan showed me that a lot of us have an idea, but are reluctant to take a chance to map out what we want to do. I encourage people to do it, you never know the rewards that will be reaped,” Russell said. If you haven’t tried Last Dragon Pizza yet, head to www. lastdragonpizza.com, where you can check out the menu or place an order. You can also find Last Dragon on Instagram, Facebook and Twitter. 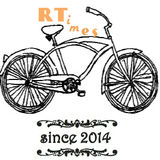