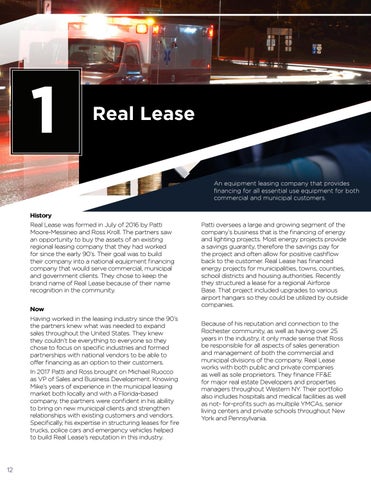 An equipment leasing company that provides financing for all essential use equipment for both commercial and municipal customers. History Real Lease was formed in July of 2016 by Patti Moore-Messineo and Ross Kroll. The partners saw an opportunity to buy the assets of an existing regional leasing company that they had worked for since the early 90’s. Their goal was to build their company into a national equipment financing company that would serve commercial, municipal and government clients. They chose to keep the brand name of Real Lease because of their name recognition in the community. Now Having worked in the leasing industry since the 90’s the partners knew what was needed to expand sales throughout the United States. They knew they couldn’t be everything to everyone so they chose to focus on specific industries and formed partnerships with national vendors to be able to offer financing as an option to their customers. In 2017 Patti and Ross brought on Michael Ruocco as VP of Sales and Business Development. Knowing Mike’s years of experience in the municipal leasing market both locally and with a Florida-based company, the partners were confident in his ability to bring on new municipal clients and strengthen relationships with existing customers and vendors. Specifically, his expertise in structuring leases for fire trucks, police cars and emergency vehicles helped to build Real Lease’s reputation in this industry.

Patti oversees a large and growing segment of the company’s business that is the financing of energy and lighting projects. Most energy projects provide a savings guaranty, therefore the savings pay for the project and often allow for positive cashflow back to the customer. Real Lease has financed energy projects for municipalities, towns, counties, school districts and housing authorities. Recently they structured a lease for a regional Airforce Base. That project included upgrades to various airport hangars so they could be utilized by outside companies. Because of his reputation and connection to the Rochester community, as well as having over 25 years in the industry, it only made sense that Ross be responsible for all aspects of sales generation and management of both the commercial and municipal divisions of the company. Real Lease works with both public and private companies as well as sole proprietors. They finance FF&E for major real estate Developers and properties managers throughout Western NY. Their portfolio also includes hospitals and medical facilities as well as not- for-profits such as multiple YMCAs, senior living centers and private schools throughout New York and Pennsylvania. 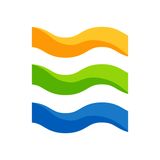