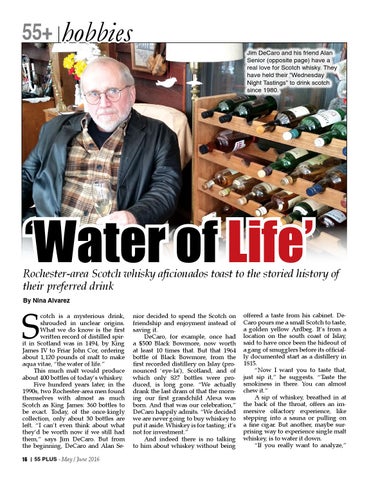 hobbies Jim DeCaro and his friend Alan Senior (opposite page) have a real love for Scotch whisky. They have held their “Wednesday Night Tastings” to drink scotch since 1980.

cotch is a mysterious drink, shrouded in unclear origins. What we do know is the first written record of distilled spirit in Scotland was in 1494, by King James IV to Friar John Cor, ordering about 1,120 pounds of malt to make aqua vitae, “the water of life.” This much malt would produce about 400 bottles of today’s whiskey. Five hundred years later, in the 1990s, two Rochester-area men found themselves with almost as much Scotch as King James: 360 bottles to be exact. Today, of the once-kingly collection, only about 30 bottles are left. “I can’t even think about what they’d be worth now if we still had them,” says Jim DeCaro. But from the beginning, DeCaro and Alan Se16

nior decided to spend the Scotch on friendship and enjoyment instead of saving it. DeCaro, for example, once had a $500 Black Bowmore, now worth at least 10 times that. But that 1964 bottle of Black Bowmore, from the first recorded distillery on Islay (pronounced ‘eye-la’), Scotland, and of which only 827 bottles were produced, is long gone. “We actually drank the last dram of that the morning our first grandchild Alexa was born. And that was our celebration,” DeCaro happily admits. “We decided we are never going to buy whiskey to put it aside. Whiskey is for tasting; it’s not for investment.” And indeed there is no talking to him about whiskey without being

offered a taste from his cabinet. DeCaro pours me a small Scotch to taste, a golden yellow Ardbeg. It’s from a location on the south coast of Islay, said to have once been the hideout of a gang of smugglers before its officially documented start as a distillery in 1815. “Now I want you to taste that, just sip it,” he suggests. “Taste the smokiness in there. You can almost chew it.” A sip of whiskey, breathed in at the back of the throat, offers an immersive olfactory experience, like stepping into a sauna or pulling on a fine cigar. But another, maybe surprising way to experience single malt whiskey, is to water it down. “If you really want to analyze,” 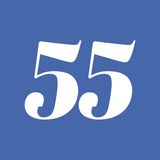