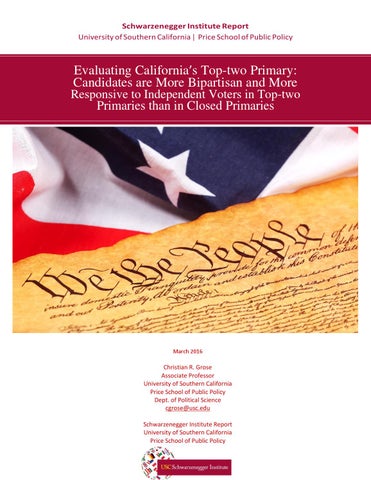 lines when appealing to voters. The most recent state to adopt the top-two primary is California, where it passed as a ballot proposition in 2010 and was first used in 2012. In advocating for California’s top-two primary to be adopted in other states, former governor Arnold Schwarzenegger (R-CA) argued that “candidates for office are forced to appeal to all voters” under the top-two primary. Echoing this claim, the L.A. Times endorsed the ballot proposition to change California’s primary rules in 2010 by asserting “Candidates would have to appeal from the beginning to a broad swath of the electorate instead of just their parties’ hardliners.” The two major parties in California opposed the top-two primary ballot proposition in 2010 (as did the two major parties in Oregon in defeating a top-two primary proposition in 2014). Some claim this opposition was because incumbents preferred running and winning in closed primaries by appealing to same-party voters they already cultivated in previous elections.4 Academic Conventional Wisdom: A Mixed Impact of Primary Type on Candidate Behavior What does political science say about the claims of advocates and critics of primary reform in regards to candidate strategies under different primary systems? Theoretically, median voter logic in a one-shot primary election might imply that candidates will appeal to independent and possibly even different-party voters when more voters can participate in settings such as open and top-two primaries (depending on the overall distribution of partisans in the district); and that candidates will appeal to a smaller subset of voters in closed primary elections. However, once two rounds of elections are introduced to theoretical models of candidate position-taking, under certain conditions (e.g., runoffs or failure for parties to coordinate on one candidate), the predictions for optimal strategies of candidates are not as straightforward (see, e.g., Indridason 2008). Surprisingly, empirical work on primaries in the contemporary U.S. has little to say about how candidate behavior may change toward voters of different partisan stripes conditional on primary system, though McGhee (2010), in a review of open primaries in the U.S., suggests that more campaign spending is needed in order to reach a “broader swath of the electorate” under the top-two primary. Similarly, Kousser, Shor and Phillips (2014, 16) state that “the new [primary] rules sought to bring lawmakers in 4

line with voters by forcing them to win the support of a broader swathe of the electorate in the primary, and by changing their incentives in the general election,” though these scholars do not study candidate outreach toward voters of different partisan backgrounds (they examine candidate and legislator ideology, finding relatively little change). Alvarez and Sinclair (2015) find that the top-two primary had some effects, though not always exactly as anticipated. In this policy report, I seek to examine this puzzle between policy advocates – who expect the electoral reforms to change elite behavior – and the more muted findings in the extant academic research in political science and public policy. Study 1: The Top-two Primary Yields Candidates More Bipartisan and Responsive to All Voters When running for office, do candidates reach out to voters of different partisan backgrounds, attempting to persuade independent and different-party identifiers to vote for them, or do candidates reach out to same-party voters in a strategy of mobilizing the base? Does this candidate behavior vary conditional on primary electoral institution type? The first study summarized in this report asks whether candidates in top-two primaries are different than candidates in closed and open primary systems. Advocates of top-two primaries have argued top-two primaries create incentives for candidates to reach out to voters of all party backgrounds. Democratic candidates should campaign for the votes of Democrats, Republicans, and independents in a top-two system, while in a closed system, there is an incentive to campaign only among Democratic voters. Similarly, in closed systems Republican candidates only have incentives to campaign to Republican voters but have incentives to reach out to all voters in systems such as the top-two. Furthermore, candidates in top-two systems are likely to be more bipartisan in their messages delivered to voters. An Audit Study of Candidates – Who Responds to Independent and Different-party Voters? To assess whether candidates behave differently in top-two contests than in other primary contests, candidate responses to voters were measured using an experiment or audit study. The states

Republican, or independent voter. The email messages were sent to candidates at the same time right before each primary election day vote. For more details regarding the message sent to candidates and the research design, see Grose (2015). The study is novel precisely because candidates were asked by voters of different partisan backgrounds to respond to a query right before Election Day â&amp;#x20AC;&amp;#x201C; and the random assignment of voter partisanship means that any differential in response by candidates to voters of different partisan backgrounds is only due to the party of the voter. I am then able to compare differential responses to voters of different partisan backgrounds across top-two primary contests, open primary contests, and closed primary contests. We cannot know whether the candidates themselves personally responded to the emails, or whether their staff and volunteers did. In some instances, it was clear that the actual candidate responded but in others it likely was a staff member.6 Results: Candidates in Top-two Primaries More Responsive to Voters of All Party Backgrounds The full results of the academic study are available in Grose (2015), but are summarized here for a policy audience. Top-two states have candidates that are much more likely to be responsive to voters regardless of their party identifications. As shown in Table 1, in top-two primary states, candidates are just as likely to reach out to voters who share the candidateâ&amp;#x20AC;&amp;#x2122;s party affiliation as to independent voters. In California and Washington, where the top-two primary is in use, 51.4% of candidates were responsive to a voter of the same party, and 50.2% of candidates responded to a voter who was independent. Similarly, in top-two contests, 48.5% of voters who were of the opposite party of the candidate nevertheless were responded to by the candidates. None of these differences are statistically different, suggesting that state legislative candidates in top-two primary states do not discriminate among voters based on partisanship when it comes to seeking their votes. Candidates in top-two states are just as likely to respond and seek the votes of Democrats, Republicans, and independent voters, as was predicted by advocates of reform.

Even in those campaigns where staff are responding to voter queries on behalf of candidates, the differential in response by staff is meaningful. Constituents will still view the response as from the campaign even if authored by staff, and the strategies of candidates are of course determined by staff in conjunction with candidates.

Candidates who responded to citizen in...

Voter is same party as candidate

Voter is different party than candidate

must choose one primary in which to vote. Thus, candidates assume that different-party voters are not likely to participate in the opposite party primary. In contrast, in the top-two primary, voters participate simultaneously, and thus candidates are equally willing to seek the votes of Democrats, Republicans, and independents. Comparing closed primary and top-two primary systems, it is clear that in 2014, candidates in top-two primary contests were much more likely to reach out to voters across party lines while candidates in closed-primary contests did not reach out across party lines. Top-two primaries are also more likely to result in candidates reaching out to different-party voters than in open primary systems. The results suggest that top-two primary candidates are much more likely than both closed and open primary candidates to reach out to all voters regardless of partisanship. Candidates in Top-two Primaries: Bipartisan Messages to Voters of All Partisan Backgrounds In addition to looking at overall responsive by candidates in top-two, open, and closed primary systems, I also examine whether the candidates present bipartisan messages to voters when they are contacted. Two research assistants read and coded every message that each voter received from each candidate in the 13 U.S. states in the study. They coded the messages as including a bipartisan appeal to the voter; or not including a bipartisan appeal to the voter. An example of a bipartisan appeal from a candidate to a voter, which came from a candidate running in California, is as follows: “Thank you for your question. I served three terms in the California State Assembly, worked for two senators and was appointed to lead a state agency by both a Democrat and Republican Governor. I have a long history of working across the aisle to solve problems and worked with my colleagues to toughen laws against sexual predators, improve nutrition in schools and to increase access to funding for small business owners. While we sometimes experience gridlock, on many issues we can find common ground if we focus on solutions instead of who will get credit….” An example of a candidate message that was not bipartisan, sent by a candidate running in a closed primary, is as follows: “I am a Republican and only Republicans can vote for Republican candidates in the primary…. I cannot think of a single Democrat idea that I would vote for.”

Furthermore, candidates running in top-two primary states (California and Washington) are much more responsive to opposite-party voters than candidates in states with closed and open primaries. Both open and top-two primaries encourage candidate responsiveness to independent voters, but closed systems do not. While these results suggest there is support for advocates’ claims regarding the top-two primary, there are limitation to this study. For instance, it is possible some other state-specific factor beyond primary type could also explain the results. Additional research should be conducted analyzing candidate position-taking, competition, and other components of the electoral process. In addition, this study could be replicated in additional settings and elections to see if these results persist.