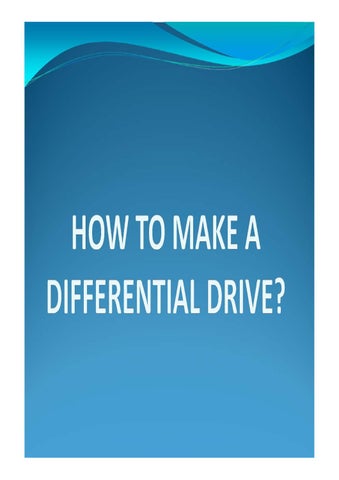 A differential  drive is the  most basic  drive to make  which consists  of two sets of  wheels that  can be driven  independently.

 To turn the vehicle (or robot) the LEFT and RIGHT

wheels are rotated at "different" speeds or in “different”  directions.     Motion

Power Supply:    Our power supply consists of the rectifier  circuit and the transformer.     A rectifier is an electrical device that  converts alternating current (AC), current  that periodically reverses direction, to direct  current (DC), current that flows in only one  direction.

Transformer:     A transformer is a device that transfers electrical  energy from one circuit to another through inductively  coupled conductors.     To make a simple differential drive, a simple  transformer with following specifications can be used:      1 Amp, C.T. ‐12 V.

Rectifier circuit:    Our power supply consists of the rectifier  circuit and the transformer.     A rectifier is an electrical device that  converts alternating current (AC), current  that periodically reverses direction, to direct  current (DC), current that flows in only one  direction.

to Direct Current.   We get Alternating Current as Power Supply in our  homes, but electronic components in robots use Direct  Current.

Motors:    Motors used to make differential drive robot are the  simple DC motors .            Though we can use motors used in toy cars for our  purpose .

 Electrolytic  capacitors have to be connected keeping

in mind the polarity   Shorter terminal is negative

Control box:      To control the locomotion of the robot, we need a

control box. It comprises of two push‐button switches  and two two‐way switches. Another method is to use  two three way switches for the two motors.      Connections can be made in such a way that the left  switch gets connected to the left motor and the right  switch gets connected to the right one.       Multi strand wires can be used to connect the motors  and the switches.

Chassis:    The chassis (and the wheels) can simply be cut out  from the toy‐cars easily available in the market by  separating the lower part of the car from the upper one  and removing the gear box from it.     For more details, please refer to the link:      http://www.youtube.com/watch?v=kFoGBIqIqoM        HAPPY BOT MAKING!!! 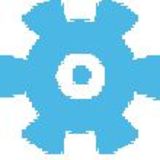